Clarification: Iain Lees-Galloway who features in this episode was Minister of Immigration at the time he was interviewed.

Sex work is decriminalised in New Zealand, unless you’re a migrant worker.  In this episode Alice visits a brothel for business and pleasure and asks why this discriminatory law hasn't been changed.​

I’ve always had conflicted feelings about sex work.  While I completely support it being legal, it took me a while to feel sincerely neutral about people engaging in it.  The prospect of exploitation made me hesitant, and the transactional nature of the sex made me feel uncomfortable.  For a long time, I reacted to other people’s desires for sex with strangers as attacks on my own desire to have sex with people I knew.  Like most people who feel the need to comment on other people’s sex lives, I was probably threatened. 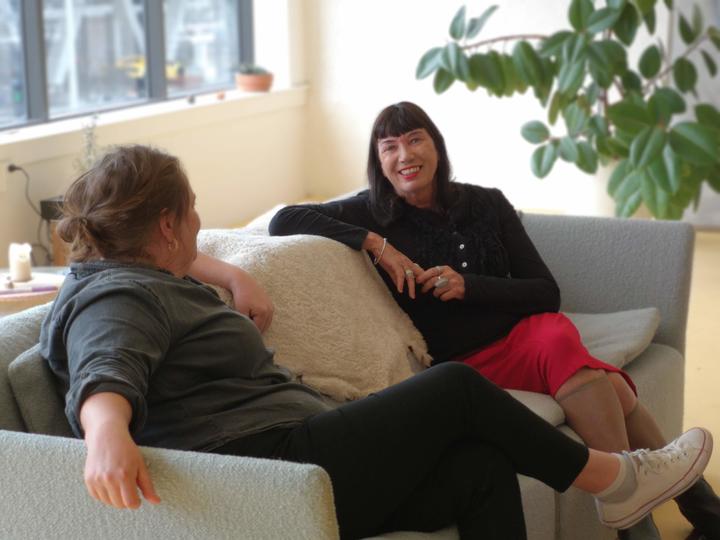 Thankfully I’ve evolved a bit since then.  I remember having a conversation with my dad where he mentioned that he supported the concept of sex work.  At the time I was shocked.  My parents are Catholic, and it was their view that sex should exclusively be a part of a relationship – a view I had been trying to shake as a young adult.  But as dad pointed out, people need intimacy.  It’s a basic function of existence, and physical intimacy is an important part of that.  Who was I to judge anyone who sought that from a paid professional?

This remains my basic stance today – if everyone involved is keen, just do what you want.  I recognise that sexual desire and sexual intimacy take on different forms for different people, and that beyond the experience being mutually consented to, there is no universal standard.  Also, after a bunch of shitty sex in my 20s, I get the appeal of just paying a professional to do something right.

It was these old questions of morality that I thought I’d be most struck by when I visited Madame Mary’s workplace.  Instead what I was most taken with was the decor.  Carefully selected mid-century furniture, dark walls and polished ply ceilings – it was a truly beautiful space.  I spent my first ten minutes there interrogating Mary on the process of using coconut oil to treat the plywood, how she finds good deals on Trade Me and wondering how their carpet still feels so soft.  We spoke about sex work, but we also spoke about what it’s like to own a Dyson vacuum cleaner (one of my major goals for the future).

As New Zealanders we love to pride ourselves on our world firsts, and the sex work industry is no different.  Being the first nation to decriminalise sex work is one of the achievements we boast about, but we still haven’t gone far enough.  Talking to Dame Catherine Healy and the recently sacked Iain Lees-Galloway, it became apparent that Parliament, like the confused teenager I once was, had let its own morality unfairly shape the law.

I think morality should play a huge part in politics.  Ideally it should drive governments to make decisions in the best interests of their citizens.  But so often, the opposite happens.  Fortunately, laws can be changed and amended, and we get to make up for our past poor decisions.  The legal status of migrant sex workers in New Zealand is one of the many places we could start.