Docu-comedy series that wrestles with some of the most confusing & contentious political & social issues confronting Aotearoa in 2020. Made possible by the RNZ/NZ On Air Innovation Fund. 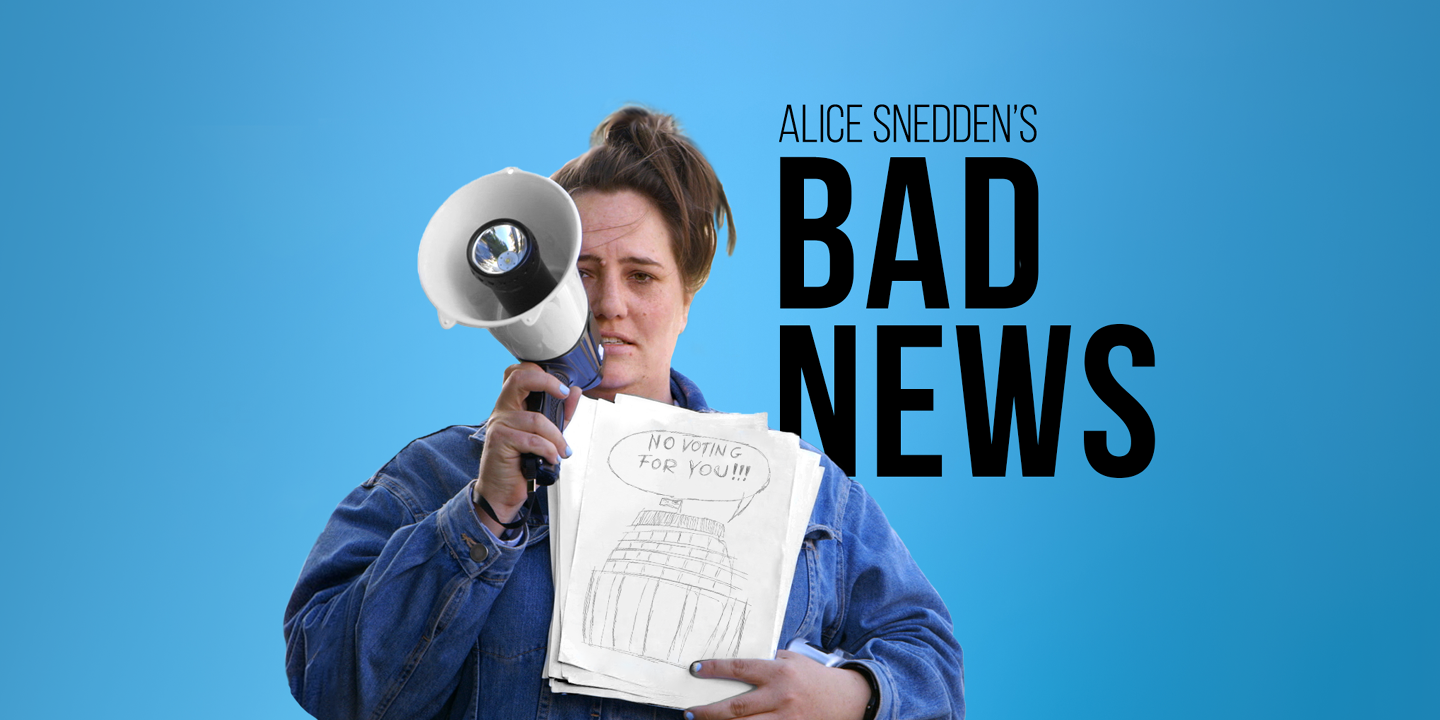 
Alice Snedden’s Bad News is an eight part docu-comedy series that tackles some of the most contentious political and social issues confronting Aotearoa in 2020.  Hosted by comedian Alice Snedden, Bad News exposes present day injustices, explores what they tell us about our past, and meets the people bringing about change to the status quo.

Each episode interrogates a different topic, encompassing everything from the right to die to the outlawing of migrant sex work.  Why don’t churches pay taxes? Why can’t all prisoners vote? And what the hell is a TERF anyway?

Snedden traverses the country to locate different perspectives and find herself everywhere from the set of Shortland Street, to the play room of a brothel, to being thrown out of Parliament’s Banquet Hall and threatened with legal action.

“Between filming numerous topless scenes, trying on coffins for size and getting electrocuted by Madame Mary, it’s a thrilling victory to only emerge from filming with only one pending lawsuit.” - Alice Snedden.

Our host will also be joined by a cast of curious comedians to express some of their own personal frustrations with the way that our society still operates.  These include Kura Forrester (Ngāti Porou) dissecting her experiences as a half Pākehā, half Māori woman, the formerly Christian Eli Mathewson confronting the charitable status of churches, or Brynley Stent picking out her favourite coffin.

“Nothing screams comedy more than serious social justice issues! The series aims to be funny and informative and I’m grateful that we’re always talking to people who provide one of those, allowing me to be comfortable in bringing nothing to the table.” - Alice Snedden.

This is a series for an audience who feels unsatisfied with the way tricky issues are handled in snappy news bulletins and clickbait headlines.  It will hand the microphone to those who don’t normally get much longer than a soundbite to share their experiences and will use humour and relatability to speak to an audience that might not otherwise engage with these issues.

Bad News encompasses the full spectrum of feelings that come with participating in our society in 2020.  Expect anger, chaos and sadness, sprinkled with moments of joy and humanity.  Expect to hear from marginalised voices speaking on the thorniest issues of our time.  Expect not to get all the answers, but perhaps some new questions.