Opinion - The MMP parliamentary system is designed to create a diverse government for the country, but it rubs against the binary thought processes taught over generations of two-party struggle. 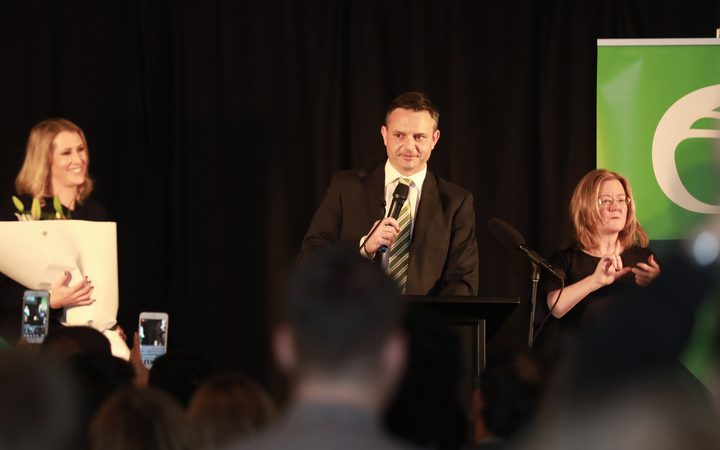 James Shaw delivers his final speech of the election campaign at St Matthew's in the City on the night of 23 September 2017. Photo: RNZ / Alex Perrottet

The most interesting speech from a party leader on election night was from the Greens' James Shaw. Entering Auckland's St Matthew's in the City cathedral, Shaw brushed aside a reporter's question about what his message would be, and said quite pointedly, "I've got a message for Winston."

The message was informed by pure MMP logic. Rather than default to the usual tribal enmities, Shaw suggested, Winston Peters and New Zealand First should consider the common ground they shared with the Greens - ideas about economic sovereignty, productivity, and revitalising industry.

By contrast, Bill English appeared to have travelled forward in time from the 1980s to deliver a stolidly triumphalist First Past the Post speech about "strong and stable" government; coalition with New Zealand First being the simplest way to achieve that.

There's a weird symmetry to Peters being at the centre of coalition calculations in 2017. MMP turned 21 this year, if you measure it from its first application in 1996. And, as everyone old enough can never forget, Peters kept us waiting an awfully long time before choosing to hold hands with Jim Bolger.

It was crushing at the time for the many who had voted to remove the government of Ruth Richardson's "mother of all budgets", which had extended the economic scorched earth policies of the fourth Labour government to a full 12 years, with another three looming.

This time, at least, the Left will not be holding its breath in the hope that Peters might opt to form a more complex, progressive coalition with Labour and the Greens. Despite Shaw's best arguments, Peters is an old school conservative with about as much time for tree-hugging as he has for unfettered immigration. In short, not much.

Furthermore, First Past the Post thinking is dying very hard in New Zealand. The essence of proportional representation and MMP - that diversity of political belief should be reflected in the makeup of parliament and a shifting dynamic of power and compromise between political parties - rubs against the binary thought processes taught over generations of two-party struggle.

But we need to grow up now. As I write there is an MMP election happening in Germany (possibly of greater interest to the rest of the world than ours, believe it or not), after which all kinds of deals are possible. The conservative Angela Merkel will no doubt win a fourth term as Chancellor, but one of her options may well be a coalition that includes the Greens.

European proportional systems have a longer history than ours, yes, but we will inevitably have to come to terms with an MMP model that is not filtered through outmoded FPP thinking. A little more like James Shaw, a little less like Bill English, in other words.

English claimed to have the "moral authority" to have the first crack at forming a government, but the fact is, more people voted for change in 2017 than for the status quo. If a Labour/Green bloc ends up only a couple of seats shy of National after special votes are counted, there is as much moral authority available to Winston Peters to add his own votes for change to theirs to form a majority.

Similarly, if the Greens were capable of it, they could look at a realpolitik strategy of extracting some genuinely progressive concessions from National in exchange for confidence and supply. Other permutations are possible, too.

In the process, we should ditch the dismal coattail rule allowing a single electorate win to trigger a party list, and lower the percentage threshold to compensate. Our parliament would be better off for having the likes of Gareth Morgan on board.

None of this may be likely yet, but one day it will have to be. It won't always be pretty or easy, either, but who ever said the business of running a complex modern society should be?

In many ways this election was a choice between hope and fear. It would be a crying shame if that fear extended to not embracing the real potential of an electoral system that - again, those old enough will recall - was hard won for the right reasons.