Opinion - For the past two election cycles I have found myself in the unique position of explaining millennials to RNZ listeners and breakfast TV viewers.

In 2014, the questions were almost always the same: Why aren't young people voting? What's wrong with them? Why are they so apathetic? 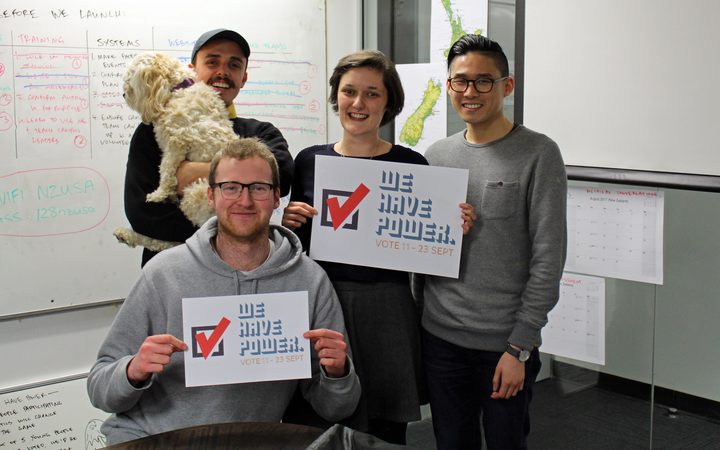 The New Zealand Union of Students Association launched a 'We Have Power' campaign to encourage young people to vote. Photo: Supplied

Who are the main young people that aren't voting? How can we transform the political system so that young people want to participate? What are the issues young people care about?

These are the questions we need to ask to turn the decline of youth participation around.

Enrolments this election among the under-30s were similar or lower than three years ago. Despite efforts to increase participation by young people, just under 70 percent of 18-24 year olds were enrolled this time compared to to 72 percent of that age group in 2014.

There is a lot of research as to why young people don't vote. Young people don't identify with the left-right political spectrum; they care for issues but not party politics. They have aspirations for a different type of politics, one that feels more values-based and authentic. They feel doubtful that the current political system can deliver the kinds of change they want to see. Their time, energy and money are tight, so they don't always feel confident they have all the information they need to make a meaningful contribution to politics.

This cannot be fixed with simple get-out-the-vote tactics and brilliant one-liners. To shift this, it requires commitment, investment and a strategy.

Here are some ways I believe we need to transform our society and political system if we're serious about having a thriving democracy where all of us have agency and participate fully.

We need to implement universal and robust citizenship education in schools that teaches the power of social movements and activism, alongside parliamentary politics. We need to work out how to cater for teacher bias and undue influence, but that can be done.

Enrolment needs to be automatic. Enrolling on a form at a post shop is unfit for purpose in a 21st century democracy.

The Electoral Commission needs more money. There are now more ethnicities in Aotearoa than there are countries in the world. Yet as far as I can tell, funding for the Electoral Commission has remained stagnant since 2008. We're asking them to do more (for example, cater to new and niche audiences in multiple languages through multiple distribution channels) with less funding. This year, there were hundreds of complaints about Electoral Commission staff not understanding the Māori roll at advance voting places and confusing voters. We need well-trained, well-resourced teams to facilitate our democratic processes if democracy is to flourish.

We need to lower the voting age to 16. This would signal to young people we take them seriously and care about their views. It starts the voting habit early and would challenge political parties to aim their campaigns and policies at the new generation. The age was permanently changed to 16 in Scotland, after 75 per cent of 16- and 17-year-olds turned out to vote in the 2014 referendum to leave the United Kingdom.

We need a 'Kōrero Politics' Day. A couple of months before every general election, there could be a public holiday dedicated to discussing politics and the upcoming vote. This 'Kōrero Politics' Day would be marked by community events, town hall meetings, festivals that combine music and politics, and other gatherings designed to foster discussion. This would underline the importance of politics, and give people time and space to think about it.

We need more young voter debates like the one hosted by Jack Tame on TVNZ. This was the only TVNZ debate that even mentioned climate change - the second highest polling issue for under-30s (just behind housing) in RockEnrol's poll of 1045 respondents.

There is no silver bullet to the problem of a youth voter decline. We need a combination of all of the above - and more - if we're serious about inviting rangatahi (young people) to have a seat at the table. And we need to start now.

*Laura O'Connell Rapira is the co-founder of RockEnrol, which aims to engage young people in the political process, and co-director of ActionStation.