Mr English told a media conference he would be speaking to New Zealand First leader Winston Peters in the next few days, and negotiations would begin from that point.

"We want to get on with the job of forming a government, but we will work with New Zealand First at a pace they're willing to go."

He said it was pretty clear cut that a two-party coalition would be more stable, and voters had given National a task of forming a government with New Zealand First.

"Our position in going into those negotiations is that almost one in two New Zealanders supported National.

"The voters have given us the task of forming a government with New Zealand First and that's what we'll proceed to do."

ACT would complicate a governing arrangement, and he would not expect the party to be included in that government.

"The shortest path to stable government is a two-party coalition between National and New Zealand First." 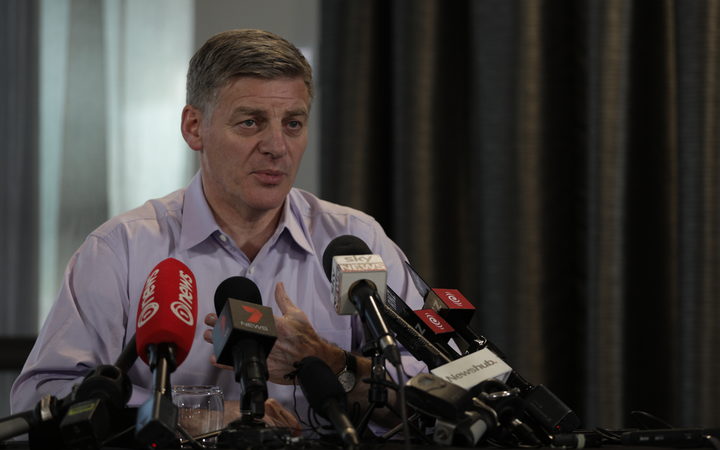 On last night's results, National, with a likely 58 seats - and Labour-Greens with 52 seats between them - would need the support of Mr Peters' nine MPs to form a government.

Mr English said National was proceeding with negotiations on the basis of a fairly strong position.

"New Zealand's had some real economic success, we would want to negotiate in a way that seeks to preserve the basics of that success."

The Greens had consistently ruled themselves out of any negotiations with National, he said. "We would need to see some indication of interest from them and constructive discussions and there hasn't been any indication so far."

Mr English left open the prospect his party would consider a referendum on the Māori seats as part of a deal to get support from New Zealand First.

He declined, however, to say whether National would reject Mr Peters' demand for a referendum on the seats. "We won't be taking public positions on issues that would more appropriately be negotiated with Winston Peters and New Zealand First."

He said the public expected this negotiation to proceed more quickly than those that took place with Mr Peters in 1996, particularly because there was such a strong vote for National and the party had the most seats.