An open and shut case? The RFK Tapes. The Boring Talks: on tracking sneezes and ice cream vans. Griefcast: comedians share their tales of bereavement and loss. How skyscrapers work: The Stuff You Should Know.

An open and shut case? The RFK Tapes

In 1968 the American senator and politician Robert F. Kennedy was shot and killed at the Ambassador Hotel in Los Angeles. It was just 4 and a half years after the assassination of his older brother John F. Kennedy in Dallas.

A lone gunman called Sirhan Sirhan was captured at the scene with a revolver in his hand, and convicted and sentenced to death (later reduced to life imprisonment). But 'The RFK Tapes' explore whether the case against Sirhan Sirhan was as straightforward as it sounds, and it uses lots of lovely old tapes, newsreel and other audio to do it.

We play an excerpt from Episode 1 of The RFK Tapes from Crimetown Presents. Thanks to Zac Stuart-Pontier and Austin Mitchell for letting us share that with you.

The Boring Talks: on sneezes and ice cream vans

Slow TV- those relaxing images of ferry rides and burning logs and people knitting- could be facing some serious competition from The Boring Talks, a BBC series celebrating the seemingly mundane and the trivial.

Blockbusting topics like a history of yellow lines, book pricing algorithms, and the international regulation of wooden pallets, are just some of the scintillating subjects on offer.

We feature clips from two episodes, with sneeze-ologist Pete Fletcher taking self tracking to the next level. Also Ali Coote on the ins and outs of ice cream vans. And thanks to The Boring Talks' creator James Ward and also Luke Doran (who produces it for the BBC) for their help.

Bereavement and grief are major life events that happen to all of us eventually.

But there aren't many how-to guides to help you navigate your way through the death of a loved one, and it isn't always an easy subject to talk about.

Inspired by her own experiences, the English actor and comedian Cariad Lloyd started collecting life stories about grief and loss in her podcast 'Griefcast', which has just won Podcast of The Year (and also awards for best interview and best entertainment podcast) at the British Podcast Awards.

We play excerpts from Griefcast's interviews with Susan Wokoma and Robert Webb, and speak to Cariad Lloyd about how she got the idea to start the podcast up.

How skyscrapers work: Stuff You Should Know 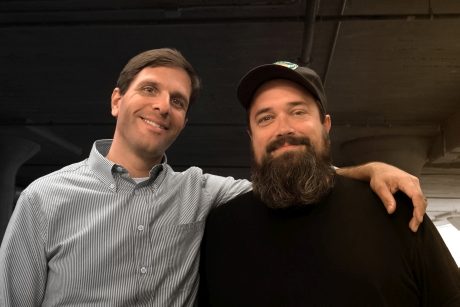 Josh & Chuck, the presenters of Stuff You Should Know Photo: (Supplied)

Take two engaging hosts, one interesting topic, add some reading and background research, and then record a conversation where they explain the subject's complexities, and tell each other all the most interesting bits.

That's the basic recipe of the Stuff You Should Know podcast, and with more than 1000 episodes recorded over the past 10 years, and millions of downloads every month, you could say that it's working!

This episode called 'Skyscrapers: 'Scuse me while I kiss the sky' answers the question of how skyscrapers work. And hosts Josh Clark and Chuck Bryant have a knack of making the answer sound surprisingly simple. Thanks to Jeri Rowland for letting us use this clip.