Two football fans I met on the free bus to North Harbour Stadium for Saturday's big final between Brazil and Serbia nicely sum up what the the Under-20 men's World Cup means.

Serbian supporters Slobodan Mandic and Nemanja Sinikovic only got their tickets for the match the day before in Adelaide from their local Serbian Orthodox Church, which had about 600 tickets available. 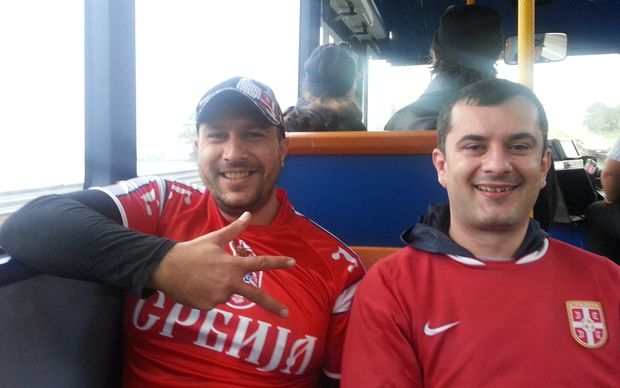 So they just decided to make the journey on the spur of the moment. They arrived in Auckland at 5am on matchday morning.

"Seven hours in a car from Adelaide to Melbourne, and then a flight to Auckland. It was crazy," says Mandic. "Didn't sleep, a few hours."

"It was a spur of the moment thing, to come here anyway, but we're glad we're here," says Sinikovic.

I ask them if their young Serbs can do the unthinkable and beat the might of Brazil.

I wish them good luck as we part ways at the Albany stadium.

I wish I could have caught up with them afterwards, once the Serb team somehow beat the five-time champion Brazilians 2-1 in extra time, the match-winner from midfielder Nemanja Maksimovic on the break coming with just two minutes to go before penalties.

My two new Serb friends would have been ecstatic. It was the first time the heavy underdogs had competed at the tournament as an independent nation, and the first World Cup win at any level for Serbia. 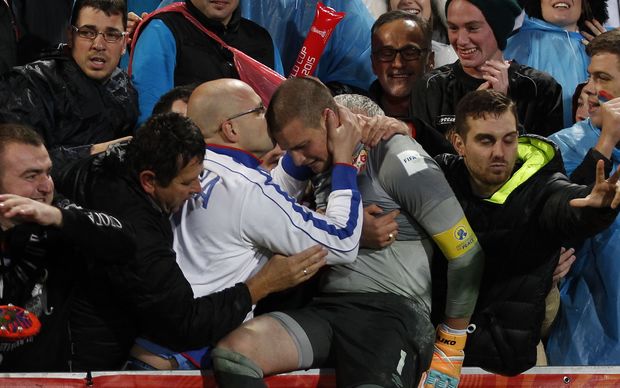 Curiously, I seem to be a bad luck charm for Brazil age grade teams - in 2012 I followed the Oly Whites around England at the Olympics, which are for under-23 players with three over-age stars allowed.

I then went to the final at Wembley between the junior Seleção and Mexico, which the Brazilians lost 2-1. I even picked the score in the pub beforehand (but failed to put any money on it). 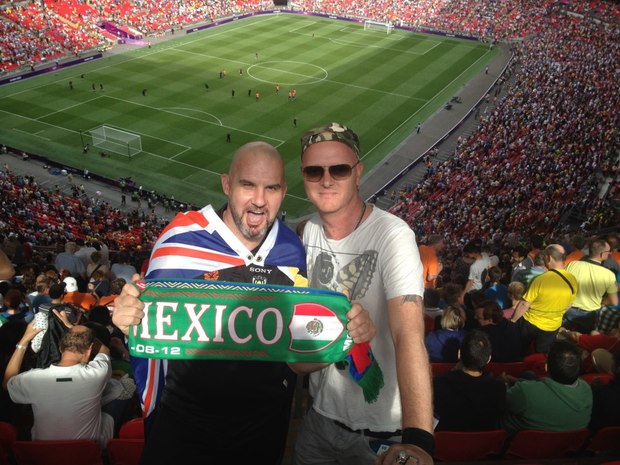 But the exuberance and dedication of those two Serbia fans really struck a chord with me, and shows how far New Zealand has to go with our following of the beautiful game, the world game.

The capacity home crowd at the Albany stadium were deathly silent during the Under-20 World Cup opener against Ukraine, in which the Junior All Whites had a deserved draw with the Ukrainians - until right near the end, that is, when the hosts almost grabbed a shock win... if only defender Sam Brotherton had directed his injury-time header half a metre more accurately!

That woke the crowd up, and the cheering and oohs were deafening. But the fans seemed content to just watch, rather than get in on the action, throughout most of the match, only rising to any kind of crescendo when the team demanded it.

Contrast that with any other country's fans at the Cup really - the obvious example being the Serbians at the final, who emphatically cheered everything after they belted out their anthem (far louder than the Brazilians sang theirs). This becomes a theme, with the Serb area behind one goal standing, chanting and singing lustily the whole game - though to be fair, the samba drums start up soon enough in the opposite corner, and there are plenty of 'Bra-ZIL! Bra-ZIL!' chants throughout the match too. 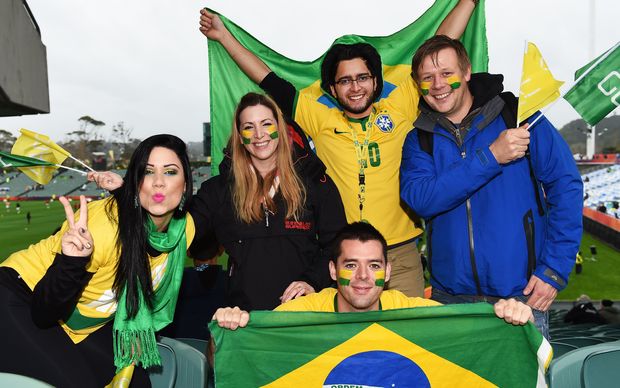 Brazil fans at the FIFA Under-20 final in Auckland Photo: Photosport

We just don't seem to support our teams very well at their games. It's the same at All Blacks Tests, when you compare our almost reverent and slightly nervous following to the likes of the Welsh, who sing all game, or even the Scots - who usually have little to cheer. After watching Scotland routed 40-0 by New Zealand in Edinburgh at the 2007 Rugby World Cup, I was highly amused to hear a group of Scottish fans among the 40,000 pouring out of the stadium singing "You only beat us by 40! Beat us by 40!".

Is New Zealand better at hosting a World Cup than we are at supporting?

There were also disappointing crowds at many of the Under-20 World Cup matches held across the country, most notably in the must-win Round of 16 knockout match between New Zealand and Portugal in Hamilton.

I only attended Auckland matches, but there were reportedly little more than 10,000 spectators at Waikato Stadium. OK, it was a wet Thursday night, but this was an historic game requiring a full house to cheer their team on as they pushed to go even further than their first-ever appearance in a Cup eliminator.

The Junior All Whites played their best all tournament that night, pushing the hugely fancied Portuguese to the 87th minute before Gelson Martins scored the worthy match-winner. It deserved a lot better than it got.

There were plenty of empty yellow seats at the New Zealanders' history-making win over Myanmar in Wellington too. 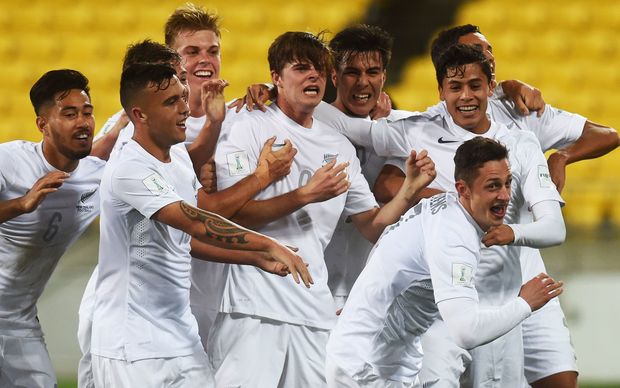 The Junior All Whites celebrate Joel Stevens' goal in their 5-1 win over Myanmar Photo: Photosport

So how did the country do hosting the World Cup?

Crowds of more than 300,000 attended the 52 matches at the stadiums in Whangarei, Auckland, Hamilton, New Plymouth, Wellington, Christchurch and Dunedin, but organisers were hoping for a few more to eclipse the 350,000 or so who turned out for the recent Cricket World Cup co-hosted here.

FIFA have made all the right noises about the numbers and the atmospheres, but whether New Zealand will get to add the Women's World Cup in 2023 - which NZ Football's reportedly chasing - let alone the grandiose idea of even co-hosting THE World Cup, ever, remains a big question mark. 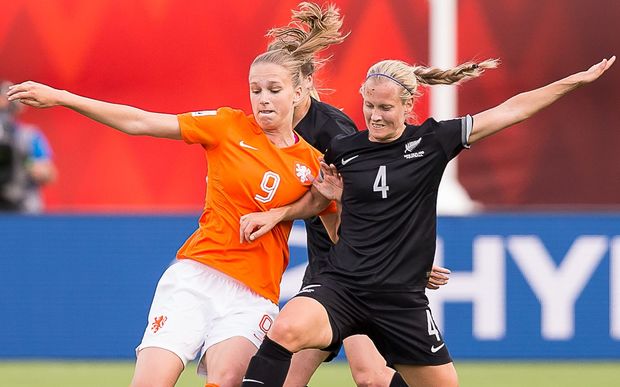 The Under-20 men's World Cup was the biggest FIFA tournament to grace these shores, following the 1999 Under-17 men's event and the Under-17 women's Cup in 2008. But it looks likely this could be the high tide mark for football in this country, and I'm not convinced we did the event justice.

The local media focus was minimal for such a global event, especially on television - summed up by One News running a voiceover with just the winning goal on Sunday's sports news. Sure, the All Blacks had been named that morning and the Highlanders pipped the Chiefs in a Super Rugby playoff classic the night before, while the Black Caps lost the one day series overnight too - but really? A half minute coverage of a World Cup final?

Hat-tip to the print and online media at least, with Michael Burgess at the New Zealand Herald in particular covering the Cup very well.

And North Harbour Stadium seemed unable to handle the numbers who did sell out Saturday's big finale, just the second game of the tournament to fill a stadium. It took me perhaps five minutes to negotiate the 50-metre walk from the media box to the stairs at one point during the game, with the teeming crowd on the concourse barely moving.

For reasons unknown, there was an hour and a half between the third place playoff, won 3-1 by Mali over 10-man Senegal in the teeming rain, and the final.

People complained on Twitter, and some apparently left early in disgust. 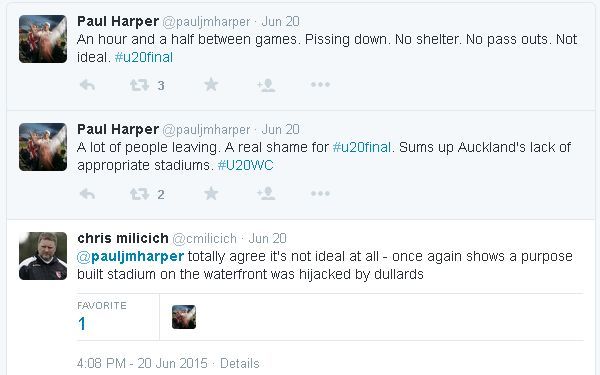 At least the rain cleared up before kick-off in the big decider. Which is another bum note: why hold a tournament of this scale in New Zealand in winter? Fair play, football's a winter sport, but you're just asking for low turnout with fickle fans here if the weather isn't perfect.

Still, just as with the 2011 Rugby World Cup, when you could walk down the street in Auckland and hear and even speak French or Spanish with the foreign hordes and feel like you were truly in a global city, the spectators did light up the city for a few weeks.

And the excitement on the bus heading to Albany on Sunday was palpable, while chatting with complete strangers who were excited about football isn't something you experience often here.

The Under-20 Cup definitely delivered on the pitch - you couldn't have asked for a better final, unless you're Brazilian of course - and sometimes delivered off it. I'll hold fond memories for a long time, perhaps a lifetime. But I doubt we'll see its like again on these shores anytime soon - if ever.