Former Public Party leader Billy Te Kahika has been taken away by five police officers at a protest in central Auckland. 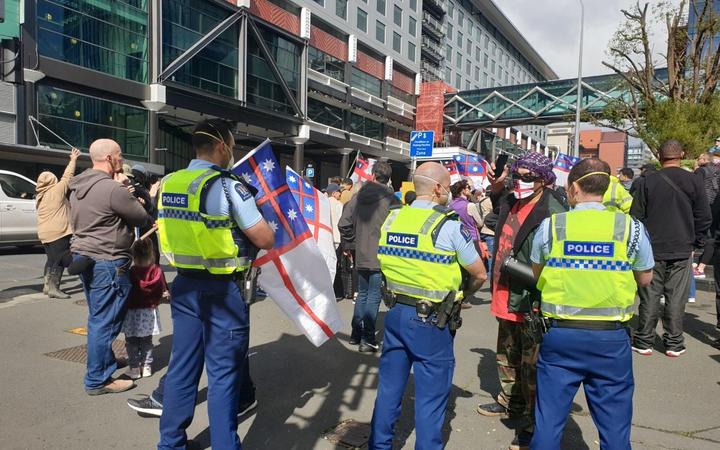 About 100 maskless people were gathered at "anti-lockdown protest" outside the TVNZ buildings.

Police said it was one of three such protests across the country today, with others in Nelson and Tauranga.

As the gathering grew, more police were called to the area, and at one point they formed a human shield while protesters yelled and barked at them.

Several people spoke at the event, taking shots at the police, media, government and others.

Those arrested have been taken back to the Auckland Custody Unit and a decision will be made on charges.

In a statement this afternoon, police said the demonstrators had dispersed.

Four people were also arrested at the Tauranga protest of about 20 people, which was outside the local police station.

They made several attempts to engage with the protesters but the four who were arrested repeatedly refused to follow the level 4 restrictions, the statement said.

Charging decisions had yet to be made.

At the protest in Nelson, also outside the police station, all those present were spoken to and urged to follow the rules, and the crowd was dispersed after about 20 verbal warnings were issued.

Police Commissioner Andy Coster said the police attended each of the protests and arrested those who refused to move on.

Coster said police "have a low tolerance" for these violations.

"We gave plenty of opportunities for that crowd to disperse ... clearly people who gather in that way put us all at risk."

"The restrictions are there for a reason and that's to keep everyone safe ... we don't want to be here any longer than we need to be."

Asked about why Te Kahika was arrested, he said he would not comment on individual cases. 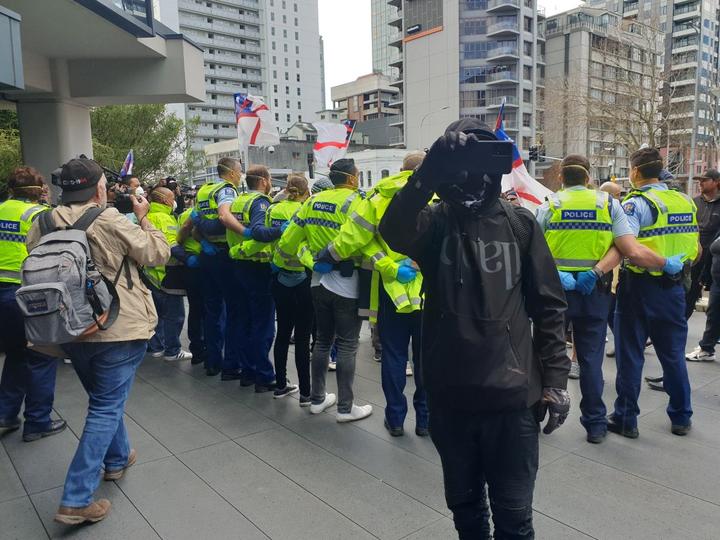 He said police staff did take a risk, but they were there to do a job and they would do it.

"When we see something we'll do something and that may include enforcement action."

Police were also wearing masks when dealing with the public, he said.

He said it was always a balance of gauging whether enforcement action would provoke people, which was part of why police were taking a harder line compared to previous lockdowns.

"Overall we were really pleased with how the community responded .... the vast majority of people are doing the right thing," he said.

"We just can't have crowds of people gathering in this context."

"We know that gatherings, as we've seen in New South Wales, can be a real risk to public safety."

Coster said police also had to turn around people travelling out of town to holiday homes.

There was also one situation of a community-led roadblock in Coromandel. Coster said the best place for the community was safe at home.

Patrols at supermarkets and other essential businesses would also continue throughout alert level 4, to reassure people and help manage crowds, Coster said.

A large number of cars were also turned around at a checkpoint on the Coromandel Peninsula, he said, and while there was a grace period for people to return home a holiday home does not count.

"Unfortunately we had a small group of people who decided to take the opportunity to go to the bach. We turned around a lot of vehicles at a checkpoint in Coromandel and it was very disappointing to see people heading towards the place that's been identified as a hotspot.

"We turned around approximately 200 vehicles. We'll have some more statistics tomorrow morning but there are a lot of vehicles that we turned around."

Prime Minister Jacinda Ardern said she did not want the actions of relatively small numbers of people to characterise everyone else.

"For the most part the team of five million are doing their bit."

The majority of police stations would remain closed to the public during alert level 4, Coster said.