“My son – you need to go. Just leave me to die. You must go, you are the oldest boy, you must look after our family.” 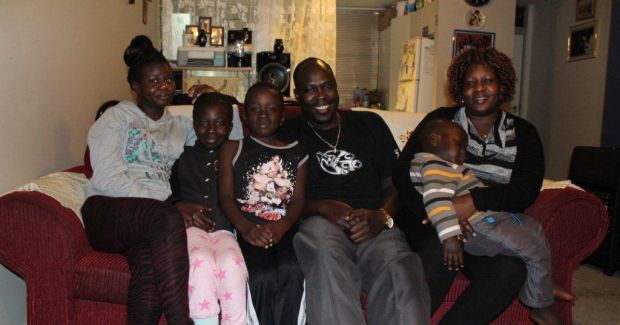 Abann Yor was 15 when his father was murdered by the Northern Army alongside all the men in their village of North Shilluk. Abann’s father was a carpenter, working in the city of Malakal. He had returned to the family village to visit his brother for a regular family reunion. Hours later he was running for his life along the banks of the River Nile. He was one of ten village men to be hunted and shot down on the riverbank. They were unarmed civilians. This is how  Abann’s grandfather was also killed, again by the Northern Sudanese when they attacked his family village in 1972.

“All the men were killed ... this is a very repeated history of my own family. If you connect that recently to what is happening in Southern Sudan – now.” Abann Yor is a former refugee, a new New Zealander. Abann is telling me his story.

“I dream at night, not good dream ... my grandmother stopping to eat, to drink anything. We knew there was something wrong ... then my uncle bring the news of my father’s death. When I look at it, it is not describable ... the pain is indescribable.”

I nod. Genocide feels like a speechless, wordless place.

“For me to voice out, trying to describe the event ... it’s a very, very huge impact. One thing keeping me and my family going is the hope when you see yourself alive, and my children alive.”
The Republic of South Sudan is the world’s newest country, bordered by Keyna, Uganda, Ethiopia and North Sudan has been devastated by civil war since 1955. The Shilluk people are the third largest ethnic group of Southern Sudan after the Dinka and Neur. The Shilluk people inhabit both sides of the River Nile in the vicinity of the city of Malakal. Most Shilluk have converted to Christianity, while some still follow traditional religions, a smaller group have converted to Islam.

Abann and his wife Mary wear small gold crucifixes, Abann touches his as he struggles to recount the murder of his father, grandfather and all the civilians of his home village. Worlds away and in the present moment we are sitting in their warm home in Mangere, South Auckland.  An hour previously I had been greeted at the door by Abann and his wife Mary and immediately introduced to their five children; Rakel (20), Daog (9), Ajako (7), Mejock (5) and Nyawell (2). Rakel was born in Sudan. The second in Syria and the three youngest here, in New Zealand.

“After my father’s murder my Uncle said to me – I am proud of you. You are replacing your family name. I knew I had to look after my family now, I was the oldest boy. This was my responsibility. I had to get my education, I had to provide for my whole family, my mother, my sisters and brothers.”

Years in Syria, some time in a refugee camp and then in 2005 the United Nations High Commissioner for Refugees (UNHCR) brings Abann and Mary to New Zealand with their two eldest children.

Abann’s mother is still living in South Sudan and what little remains of Mary’s family too. The precarious situation their families exist in is something that haunts Abann and Mary every day, especially with the ongoing internal conflict and current growing humanitarian crisis there.

What about life here, now, in their new country?

The suburb of Mangere is named after Mangere Mountain,  the title in Te Reo  'hau māngere'  when translated means lazy winds, as the mountain provides shelter from the prevailing Westerly. Abann embraced the Maori meaning of Mangere and laughingly calls himself a “black Maori” – something that created robust debate with his Maori neighbour initially – after this neighbour told Abann to “go back home.” They’re best of mates now. Abann’s immensely proud to be a New Zealander.

“Our journey to New Zealand was a second chance. When we are accepted as refugees in Syria by the UNHCR, then we are peoples who don’t have a country. When we find out we are being sent to New Zealand, then we know this is our second chance. New Zealand is our new home. My children are replacing my dad, my granddad, they are replacing all the people I lost. They are the future. This is the opportunity I have,  for us to contribute to our new country. This is the hope I have.”

Abann was shocked though, when he didn’t get a job after initially spending 6 weeks at the Mangere Refugee Centre. He was used to working – everywhere – he had worked to make a living to support his family from the age of 15. Unemployment and the welfare system in New Zealand was a different kind shock that took some adjusting to.

Ever resourceful and driven, Abann completed a 6 months English course at Manukau Institute of Technology before taking on a Mechanics Course. Four years training and Abann became a fully qualified Mechanic, yet he still could not get a job.

“I realised it’s not what you know but who you know here in New Zealand.”

During his training Abann had also dedicated his time to various organisations including Auckland Refugee Community Coalition and Refugees as Survivors New Zealand, RASNZ.

After a cup of tea we start talking about Abann’s altruistic work with the Refugee Youth Action Network an initiative that Abann co-founded and serves as the Employment Co-ordinator. Abann is passionate about RYAN because he wants youth from our refugee communities to pursue a full education and to find meaningful employment here. He despairs if any youth he comes across fall through the gaps. 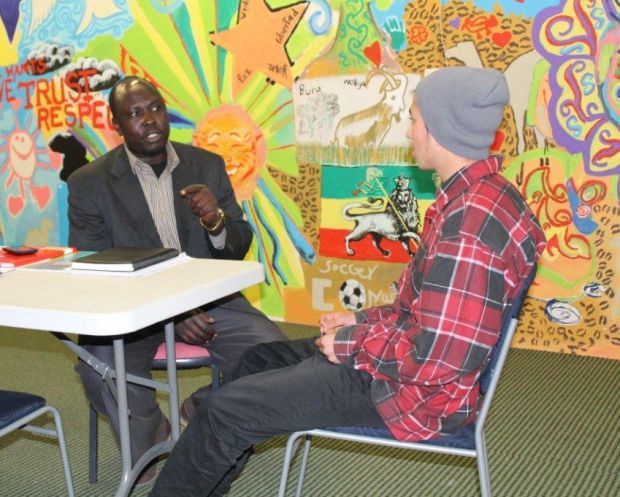 WISE (Women Inspired Strong and Enterprising) is another initiative that Abann worked on behind the scenes, encouraging women from former refugee backgrounds to support each other, to create work for themselves,  to overcome isolation. Ironically Abann’s so busy these days he’s often away from Mary and the children, something Mary understands but still finds frustrating when she’s somewhat isolated herself with childcare at home. She’s looking forward to a time where she can attend adult student courses herself. She’s keen to do night classes, keen to get out in the community more, to eventually be working. Isolation is the key issue affecting our former refugee communities.

Now we are laughing: Mary and Abann are describing how they met in the Shilluk community back in South Suden. They met at a community wedding – emphasis on “community”, because hundreds and hundreds turn up for these weddings. Everyone is invited because it’s a chance for all the singles to do some hunting for themselves, for a soul mate of their own.

Abann reflects that his true test of endurance in life was winning Mary’s heart and hand in marriage. Apparently, if you’re really serious, it’s a trial tantamount to a marathon to woo a Shilluk woman. And you better be serious because you have to prove yourself to the whole community.

“For us as a Shilluk tribe it’s not easy, it takes years! If I knew that ...! If I start to fall in love with her, then for us, when you approach the girls it takes months or years to say yes. Our women never say yes, never straight away.”

So they make you work hard?

“Not just work hard – will make you to involve witnesses too, so they involve my friend, her friend; to make sure it won’t fall apart.”

Mary joins in; “Yes, to make sure, our friends are our witness for a good marriage.”

And the men chase the women?

Three years? I’m deeply impressed with his dedication but not quite sure about the “10 cows.” Abann explains: “It is our dowry, but every man must pay this, no matter how rich or poor. If you are seriously in love with this woman, then you prove this to her family with 10 cows.”

“Three years.” says Mary proudly. “And I will remind him how long he has been chasing me.”

“My lovely wife Mary. She is a strong woman. I am lucky to have her behind me. She is why I can do all this work for our community. Because she is strong for me, for us.” 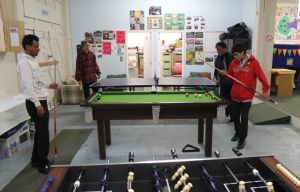 Right: After school activities at RYAN