“We might not be able to speak the same language, but our music is common ground, coming from the same place.” – John Lake 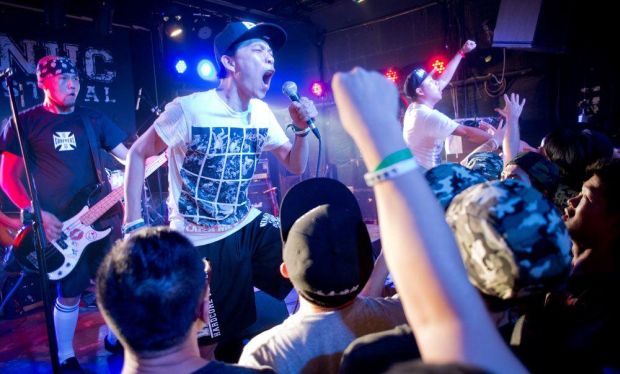 Wellington Photographer John Lake is a self-confessed punk with a great eye for the juxtaposition of life and culture. For instance his arresting image of Beijing punk band Hell City sporting their carefully cultivated Mohawks as they play pinball in an old Beijing hutong (a neighbourhood of narrow alleys and walled yards) speaks volumes about the delightful clash of the very ancient with the very recent (or at least “recently revived”).

Because that’s what it is, the revival of the punk scene, happening for the first time in Beijing. Technically perhaps it’s not a revival but rather a love affair, as the punk scene in China is only about a decade old and seems full of the youthful energy of those in the honeymoon phase of a passionate movement. In this case it’s the Maoist punk movement – how ironic perhaps? Upholding some of old school Maoism and the very early ideals of Communism could potentially get you in trouble with the current powers that be, especially if you get very loud and leather-clad with your rebellious messages.

And John’s the first punk to get it, something that made Jennifer King, Director of Culture (The Asian New Zealand Foundation) a little apprehensive about how her boss at the Foundation might receive John’s presentation to the staff. Her boss and the staff loved it, it was a chance to view John’s carefully recorded project with its striking photographs and entertaining vimeos exploring a cross-cultural perspective of punk, looking at similarities and difference.

Gallery: Up the Punks! 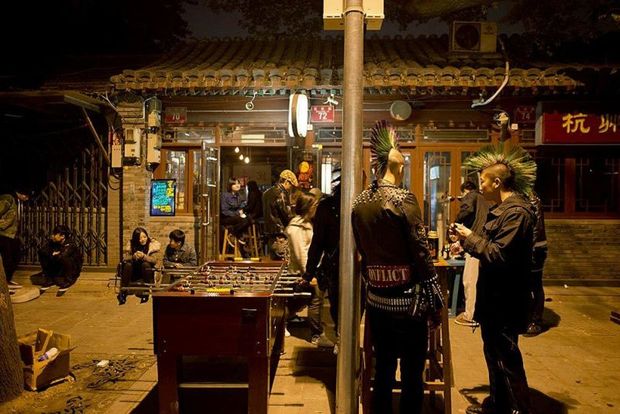 Hell City sport their mohawks outside the Old What Bar in Beijing.

John’s application stood out head and shoulders because his Up the Punks! project had a real collaborative approach towards the community in Beijing. Community engagement  and collaboration is exactly what the Asia New Zealand Foundation look for in Red Gate applications. So with no spoken Mandarin but a good idea of which bands and who to approach, John went straight to Beijing to be embraced by the punk scene.

I’m meeting with John at the Film Archive in Wellington (appropriately), as he entertains me with his hilarious video of Sochu Legion’s bald and leather clad singer performing a quirky rendition (sounds like an obscene nursery rhyme), to bewildered shoppers and their children at the BMG Shopping Mall in Beijing.

John tells me that it’s all about how you carefully critique China’s powerful. So how do you get around censorship?

Lead singer D from Gum Bleed finds it’s easier to sing in English and track listings will be fake song names such as Santa Baby, but dig a bit deeper the real song title might emerge on an ipod as Civilisation Crime. These Maoist punks are the new leftist critique of China’s slide towards a capitalist economy. I do love the word play although I wonder that if they get too cryptic, they may run the risk of getting lost in translation.

All that aside I’m fascinated by John’s experiences with these bands and by how they get away with their repeated references and songs against globalism, against the perceived growing mass consumerist culture, against the destruction of the old hutongs and old cultures of China.  John tells me that he personally found the lucrative explosion of shopping malls and consumerism, the embracing of European brands – the status one-upmanship of owning a European car – this new pursuit of wealth – quite shocking.

With names like Gum Bleed, Unregenerate Blood (Beijing’s most established punk band), Brain Failure and The Subs (with characters translating roughly as Scream universe Scream) – John’s bemused response is that at least they match the punk scene overseas with their band names.  The combination of the D.I.Y. (Do it Yourself) punk culture and its active challenge of the status quo means creating your own venues and music and recordings – something that’s been embraced by Beijing punks. This D.I.Y. approach is very much a punk tenet says John.

These are young people who missed their parents’ experience of the trauma of the Cultural Revolution but are not afraid to be (carefully) outspoken about what they see as new issues in China. At least you can’t miss them, they’re the real visual minority in China, something that’s true punk in spirit!