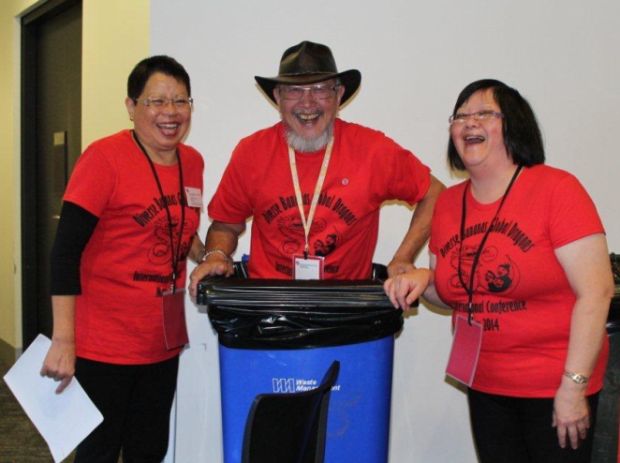 “So who are we anyway?” asks Professor James Liu of Victoria University, as he chairs the session titled The Asianisation of Auckland with guest speaker Sociologist and distinguished Professor Paul Spoonley.

Professor Liu is challenging notions of our identity at the Going Bananas Conference at the University of Auckland Business School. A “Banana” is a familiar term used somewhat ironically and affectionately amongst Chinese New Zealanders about themselves. A “banana” refers to being “yellow on the outside and white on the inside.”

The conference is focusing on Chinese New Zealanders and is filled with the breadth of the Chinese community from across the country, particularly young, smart and driven people.

“The theme of this year’s conference is “Diverse Bananas, Global Dragons”. Through development of time to the modern today, it is time to reconsider a new term to replace the terms “Banana” and “The Descendant of the Dragon”. With increasing localization, the International Chinese no longer represents one with yellow skin and a completely westernized attitude and behaviour. In fact, Overseas Chinese could now be defined as one who is willing to accept and connect the cultures of both east and west as the basis to be a global citizen in today’s world.”  – Writes Delegate Ellen Chuan Yang.

On that note, some terminology: A generation “1.5er” is a term used to describe a young New Zealander who was born overseas but grew up here as a child. Their parents will be new migrants, often Asians, possibly struggling to adapt to their new home. The generation 1.5er may be; bilingual, quick to adapt, may translate for their parents at school and may grow up identifying strongly with being a “New Zealander” (whatever this means) – and much less at home in their birth country. Some may even rebel against their parents and their heritage culture. These young people are our future.

So what are the figures? What’s the shape of our future populations (the bananas, the 1.5ers, the new migrants... )?

We live on the Asia Pacific Rim so it follows that most of our new migrant population will be from Asia. Research shows that by mid-2020 around 800,000 Pan-Asian New Zealanders will live in our country, around half a million of these in Auckland. That’s more than 25% of Auckland’s population, mostly in the service sector. Auckland will become largely “service” based.

So Auckland’s demographics are changing rapidly and within the next decade. Will New Zealand become “three nations?” the nation of Auckland, the “North Island” and the “South Island?” What socio-economic and cultural changes are in store for our country?

“I don’t’ think people understand how strongly the growth of Auckland is driven by Asian migration ... that’s a huge contrast for the rest of New Zealand. When we look at the rest of New Zealand, they see Auckland growing in a population sense, in a political sense, but they also identify it very strongly with that growth in the Asian population. They tend to combine them unfortunately and see the Asian presence as a negative, the growth of Auckland as a negative and to be quite hostile to Auckland on occasions.” – says Professor Spoonley.

Is it a case of xenophobia? I ask him, trying to imagine a nationwide, irrational fear of new migrants. Not so hard to imagine; New Zealand’s immigration history is littered with examples of xenophobia from the Poll tax affecting Chinese to the Dawn Raids of the seventies during the crackdown on illegal over stayers from the Pacific Islands.

“Contact makes a huge difference to people’s attitudes. We in Auckland have contact with these new migrant communities, Asians or whatever all the time and that contact helps us to understand them. But when you go to other parts of New Zealand the number of Asians are very small indeed ... Really there’s not a lot of contact. I think it’s important that we understand as New Zealanders that our future is very much tied with Asia, that migration from Asia to New Zealand is really important for who we are as people, and we’ve got to have a conversation about what that means really.”

“So that’s a very different New Zealand from the colonial New Zealand where we tried to keep Asian’s out. We are very tied to the arrival of these migrants now, and they’re part of how we trade and how we get skills in this country, so they’re very important to us.”

“I think the labour market’s lagging behind the changes that are happening. A lot of our employers are making it hard for new migrants who are qualified to get a job here. One of things we need to address is the attitude of key organisations of key employers; you’re going to have to consider these migrant professionals as part of the future labour force for your organisation or for others. I think people need to be confronted; you’ve got to change your approach. Otherwise you’re going to be left behind.”

What about the distribution of jobs in other areas of New Zealand, areas struggling against job losses and population decline? What do we do to help people in regions without large migrant populations? What do we do to keep people and jobs in these regions?

Back to concepts of our “national identity” and Professor Spoonley talks to me about common misconceptions; when New Zealanders view Asian New Zealanders:

“The assumption we often have (as people outside the Asian community) is that these are people who all see alike and think alike. Of course, not so. Even those coming from China have enormous differences amongst themselves and the difference between them and their children born here are quite stark really.”

“I think it’s not going to be a single voice. That’s what diversity is about, that’s what becoming a much more diverse New Zealand is about, with a much stronger Asian presence. You can get on. People respond positively to your interest. I think we as New Zealanders need to show more interest.”

And the dialogue needs to come from us?