"On World Refugee Day, I call on the international community to intensify efforts to prevent and resolve conflicts, and to help achieve peace and security so that families can be reunited and refugees can return home." 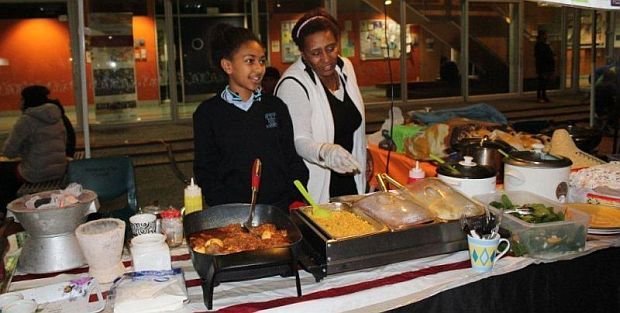 Ever tried genuine Ethiopian coffee? It’s sweet, rich and aromatic, poured into tiny glass cups. The beans are specially imported and fresh-roasted that morning and percolated for hours over hot embers in an ornate clay coffee-pot. According to legend the plant Coffea arabica was discovered by an Ethiopian goat herder in the 9th Century, so they’ve had over a thousand years of perfecting the art. Coffee makes up around 60 percent of people’s livelihood in Ethiopia so it’s a big part of the economy there. It’s also a tantalising draw card for the Ethiopian stall, among the many authentic food stalls that WISE Women Co-ordinator Yehuala and her friends run. 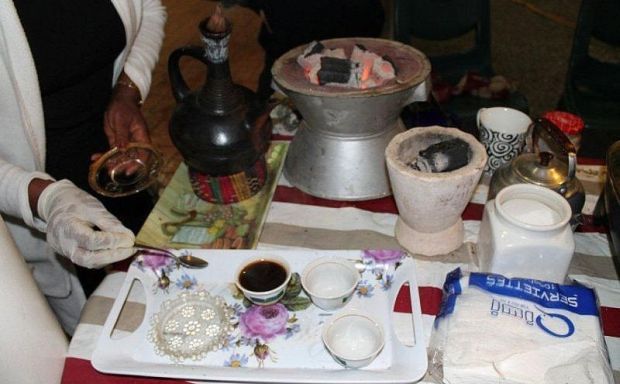 On June 20 we marked World Refugee Day, honouring the courage it takes to leave your homeland under the threat of persecution and violence. With this in mind, I took the opportunity to travel to the Night Markets at the New Lynn Community Centre to meet these WISE women. WISE? That’s Women – Inspired – Strong – Empowered and Enterprising.

That’s women like Yehuala from Ethiopia and Ling, Khaing-khaing and Nan from Burma. Nan and Yehuala are founding members of WISE Collective and tonight Yehuala is my guide through the Night Markets of New Lynn, Auckland. 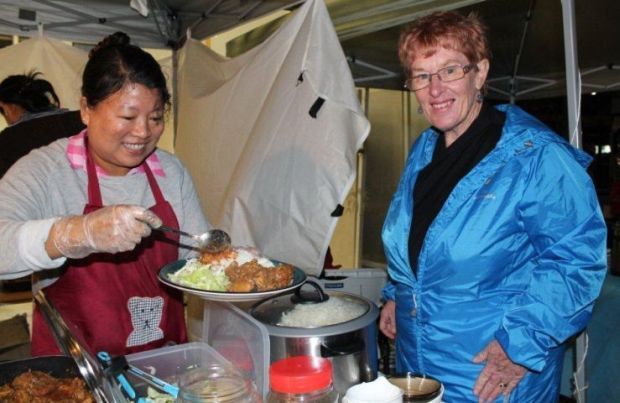 Each of these former-refugees leave a story behind them; of extraordinary courage, survival and tenacity. But that’s behind them, they’re New-New Zealanders now says Yehuala. Yehuala tells me that a recent study showed that of all the minority groups in New Zealand, refugee women remained the most isolated with post-traumatic stress and depression exacerbated by this isolation.

So the solution? Former refugee with life skills – proactively help recent arrivals to gain them.

Yehuala says it’s easy to see the difference that the WISE initiatives have made to these women, between the woman who first arrived to the woman I see now serving behind the food stall. This woman began starkly isolated, alone with her children. She was reluctant to leave her house to venture into an environment so utterly alien. She struggled with language and cultural barriers.

Participation is the key to these women’s integration, and their children’s – how else do they all learn to integrate with their new home? Asks Yehuala.

Yehuala says look at my friends now, each of these women serving up a taste of her homeland. She is confident, she chats to the public, she proudly explains traditional dishes and crafts (such as the handmade woollen heritage blankets, each imbued with a story from their country). She is earning money, she is putting life skills into practice – its micro-enterprise development at it’s very best.

Yehuala herself first arrived in New Zealand only six years ago as a refugee. The first organisation she passed through was Auckland Regional Migrant Services (ARMS), where workshops to aid resettlement were pivotal in shaping what she wanted to do next; tertiary education for a Bachelor of Health Science. Then Yehuala joined theAuckland Refugee Community Coalition (ARCC) where the WISE Collective was first seeded. WISE became a partnership initiative operated by both ARMS and ARCC. Other partnership projects include two Multicultural Playgroups for refugee background mothers and children – in Massey and another in Lynfield, Auckland.

The aromas from the Burmese stall are making me drool. Ling, Nan and Khaing-khaing tell me that the chicken curry with coconut rice tastes great with a liberal sprinkling of balachau made by grinding dried prawn, onion and garlic together and then fried. Then there’s the fried tofu dish with ginger sauce made with Tamarind, coriander, garlic, sugar and salt. WISE was established three years ago, but these night markets have only been going for six months and they’re already hugely popular. 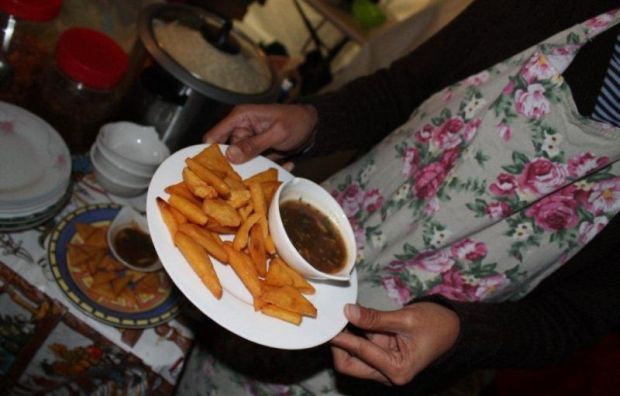 Yehuala leads me past numerous kiosks (the Sri Lankan stall will be coming soon – the new woman is currently gaining her food-hygiene certificate) to the Ethiopian and Afghani food stalls. The placard tells us we’ve arrived at  “Ethiopia”, the embers glow orange under the coffee-pot and Berkelishrobia serves me their traditional coffee, assisted by her 11-year-old daughter Mary. Children are helpers and translators. They’re vital assistants and they seem to be genuinely enjoying themselves. These children are proud of their heritage, practicing their mother-tongue. It’s also a chance for their mothers to pass on secret family recipes.

Traditional Ethiopian stew or doro-wot is made with chicken, tomatoes and boiled eggs, the heat of the spice has been toned down for Kiwi tastes. It can be accompanied by beetroot and potato salad. Ingera their traditional gluten-free flat-bread is made from barley rice and chapatti flour and fermented for two days. It’s cooked on a large flat griddle and has a mildly bitter taste, kind of like sourdough. Ingera accompanies mis-er (lentil stew) or bige-wot, traditional Ethiopian lamb stew.

The neighbouring Afghani stall Zarghouneh explains, with a broad smile, that their traditional Afghani rice is the longest grain you’ll ever see and very expensive, (at $25 a kilo), but what a flavour! Lentil stew and bolognie – a bread like pancake, can be filled like a sandwich. She serves me mantu, traditional Afghani dumplings, steamed and served with chutney. Zarghouneh’s 10 year old nephew gives change to a very pleased customer, who promises to come back for more. At only $10 for 7 authentic tastes of their homeland arranged generously into a large container, who wouldn’t want to go back for more? 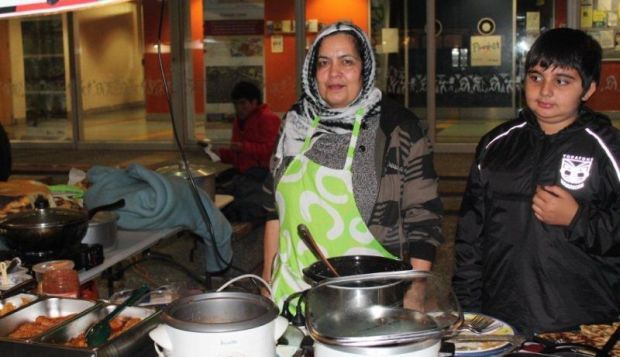 Zarghouneh and her 10 year old nephew serve at the food stall for Afghanistan.

The WISE Collective run their traditional food stalls at the Night Markets at New Lynn community centre, every Thursday from 5pm. The WISE Collective have also set up a WISE Multicultural Catering Team involving women who have been trained in food handling.

Currently many countries and regions have held their own Refugee Days and even Weeks. One of the most widespread is Africa Refugee Day, celebrated on 20th June in several countries including here. According to the UN by 2011, an estimated 43.3 million people worldwide were forcibly displaced due to conflict and persecution and children constituted 46 percent of the refugee population. A number of our refugee families here are solo-mothers with children.

United Nations Secretary-General Ban Ki-moon describes World Refugee Day as an opportunity to “reaffirm the importance of solidarity and burden-sharing by the international community. Refugees have been deprived of their homes, but they must not be deprived of their futures.”