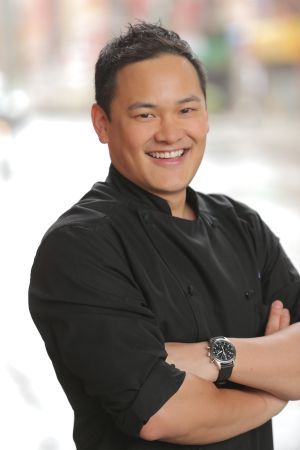 How many Kiwis can say they've appeared on Oprah and Iron Chef America or redesigned meals for American school kids with basketball legend Shaquille O'Neal or made meals for the President of the United States?

Anthony Hoy Fong was born and bred in Mt Roskill, Auckland. He’s proud to call himself a third generation New Zealand born Chinese. From toiling in his family's fruit and vege store to running one of the largest restaurants in Times Square, Anthony has soared to great heights in the culinary world, most recently setting up Top Chef University to help young, aspiring cooks.

I’m catching this high-flyer during a flying visit to Auckland’s appropriately named Going Bananas Conference 2014 (named after Chinese New Zealanders, not a grocery convention!) to learn about the secrets behind his culinary magic. We’re at the University of Auckland Business School, also an appropriate venue, as Anthony seems to perfectly blend his culinary magic with very sharp business acumen.

Anthony’s the famous face on the Creative Thinking Project panel, exploring creativity and innovation. After muscling my way to the front of the auditorium, through throngs of women fighting for his autograph, I finally have the opportunity to chat to one of our most quietly famous chefs. The first thing that strikes me about Anthony Hoy Fong (apart from his very firm handshake) is his very approachable demeanor.

Anthony’s very humble about rubbing shoulders with, or rather, rubbing spices into those BBQ Spare Ribs for some of America’s most famous. He immediately acknowledges his grass-roots background, but even more endearing, he pays homage to his mother and grandmother’s cooking as the most influential in his career as a stellar chef.

As a child, Anthony owned Letters to a Young Chef – narrating a day in the life of the French and Michelin starred New York Chef, Daniel Boulud. Perhaps it was Boulud’s book that inspired Anthony to co-found and create Top Chef University.

This culinary business very recently partnered with Google (under Google help outs) and launched in January this year – a mark of Anthony’s big brand credibility and reputation as a chef.

In a nutshell it’s an online culinary school providing over 50 hours of video cooking content and 220 video lessons with 11 of the most popular Chef’testants from Bravo’s Emmy award-winning show Top Chef.

Professional cooking techniques and food preparation methods are showcased to include everything from sautéing to confit – a chance to have a sous chef hold your hand in the kitchen (virtually of course and in real time) with on demand culinary help.

Ever approachable and accessible, Anthony insists that if you do have a burning question regarding food, you can always follow him on twitter @AnthonyHoyFong or on facebook and he promises he will get back to you!