"He’s our superman! All we have to say is 'Gurpreeji...!' And he’s there, anytime of the day! He’s been there so long he knows the community, that’s a strength not everyone has.” 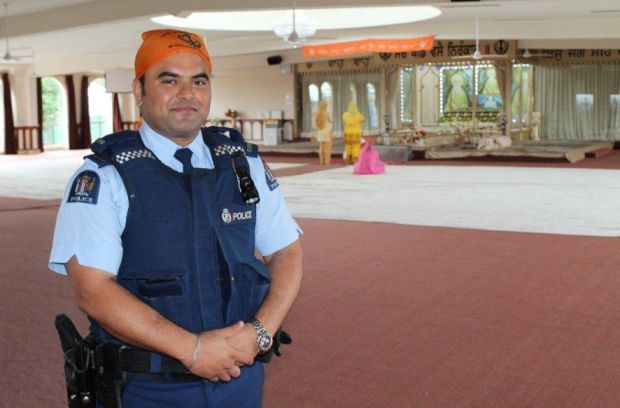 With this in mind I set out to join one of the growing team of Ethnic Liaison Police Officers serving across our country – just for the day. I want to get on the beat with one of these officers, so I can see the job through their eyes and what better place than Manukau Counties, because that’s home to our fastest-growing migrant population.

Constable Gurpreet Arora is softly spoken but his handshake is firm. I greet him at the entrance of Manukau District Police Station with a hurried and profuse apology for parking my car in the only available space outside the station (where it shouldn’t be!) and we organise moving it pronto before I get myself a ticket.

As a South East Asian Police Officer, Gurpreet has been serving Manukau Counties for the last eight years. He’s seen many changes affecting demographics, and diversity in faiths and cultures. Although diversity is being celebrated, along with it comes lots of new issues, because migrants are coming to the country on a daily basis says Gurpreet.

He explains, as we get into his unmarked police vehicle and drive across the city, that we’re heading first to the Sikh Gurdwara (Temple) in Manurewa (Anand Isher Educational & Community Trust). This is so I can see him in action with the people from his own ethnic community. Gurpreet has the added advantage of being born in Ludviana, the largest city in the Punjab Region of North West India. That means he has both Sikh and Hindu faith reflected in his upbringing. This means he’s tri-lingual, speaking Hindi, Punjabi and English. Being multi-lingual is vital to the job and a great advantage for Gurpreet.

The Sikh Gurdwara in Manurewa is huge, with a crowd capacity of hundreds and a very large Langar room (community lunch room) and kitchens. After being greeted warmly by an elderly woman and man at the entrance, its shoes off and chunni on (head covering). After paying our respects to the Guru Granth Sahib (the Holy Book), we move downstairs to the Langar room. Always hospitable, I’m given some ghee-prashad and chai tea by the volunteers at the Gurdwara, mostly elderly from the community who find great comfort being able to get together. It sure beats the issue of isolation that affects many new migrants with no spoken English.

Gurpreet is reassuring the Elders in Punjabi that the police will follow up on complaints, especially concerning workplace security. Everyone in the community is feeling vulnerable after the murder of a dairy owner in Auckland. Many Sikhs work in the service industry around Auckland regions, particularly in Manukau, these Elders have sons and daughters working behind the counters of dairies, bottle shops and supermarkets.

As we’re about to leave one of the Elders asks Gurpreet about the five sacred ‘Ks’, that’s the five articles of Faith that Sikhs wear at all times as commanded by the tenth Sikh Guru. They include: a Karak (steel bracelet), a Kacchere (undergarment), Kesh (uncut long hair), Kangha (small wooden comb), and a Kirpan (a short ornamental dagger). They’re seen, not just as symbols, but are intrinsic to the external identity of a faithful Sikh. But it’s a problems for those wishing to wear the Kirpan in public. Gurpreet has a long discussion in Punjabi with the Elders explaining that New Zealand is a tolerant country, it respects people’s right to different religions but in this case it might be prudent to wear the Kirpan under an outer garment to avoid unnecessary call-outs to the police from concerned public. 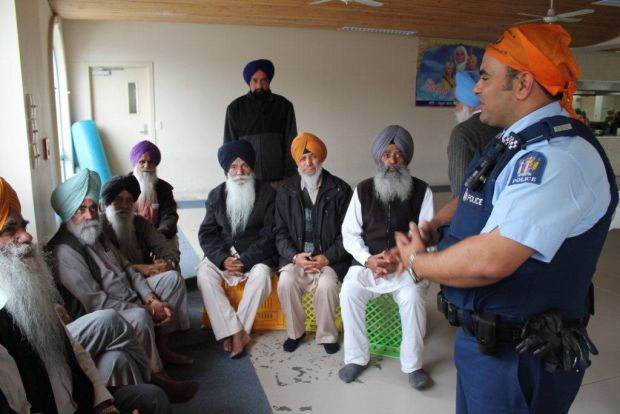 Constable Arora addresses Elders at the Sikh Temple in Manuwera

Gurpreet introduces me to the Manager of the Sikh Gurdwara, Rajvinder Singh. Rajvinder has a very clear overview of issues facing the new migrant community – especially when it comes to incidents like domestic abuse – which is often a sensitive topic for new migrants and one that some community leaders try to squash in an effort to keep the profile of their community under the radar of mainstream media.

But Rajvinder is refreshingly candid and proactive in this area. Their Gurdwara work in co-operation with the NZ Police and other agencies, Gurpreet is the first officer they call in relation to any incidents. This Gurdwara is also the first in the country to set up an Early Childhood Centre (I make a mental note to follow this up for another Voices programme!), providing many services for their community to combat the isolation that creates the raft of social issues for new migrants.

Back on the matter of domestic violence. Three deaths in 2002 prompted the creation of the NZ Sikh Womens Association – a women’s refuge and social support service that Gurpreet is driving us to. We arrive at the doorstep in the heart of Otahuhu and Gurpreet introduces me to this group of outspoken women, a service provider for the community ready to help the men in their community as well as the women.

It’s at Sahaayta Counselling and Social Support Services across the road that I finally see Gurpreet blush with embarrassment when Zoya, a Social Worker there starts singing his praises. She calls him their Superman. That’s for all the call-outs that Gurpreet fields outside of his regular eight hour shift – making his role as the community Asian Liaison Police Officer more like a 24-7 service.

At the end of his beat we arrive back at the station. Gurpreet lets out a long sigh; he’s off home to his loving wife, mother and sister – it’s the Sikh way to live with and support your extended family, but navigating the challenges that comes with living with three dearly beloved and strong-willed women means that Constable Gurpreet Arora’s home front can be as challenging as being out on the beat at times.