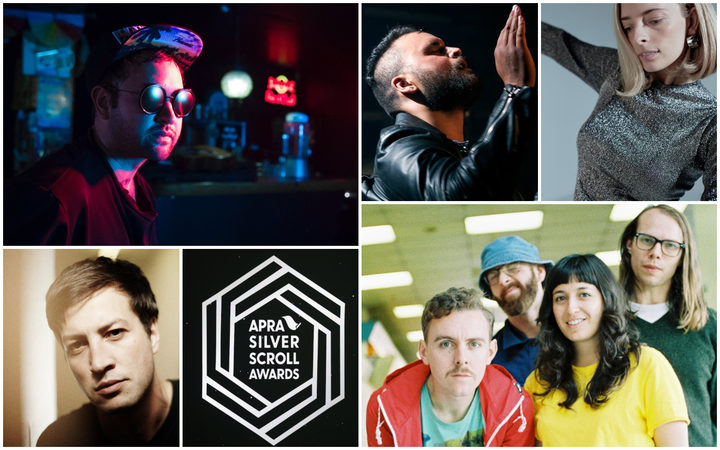 The top five songs are:

The five finalists were pared down from a long list of 20 songs chosen by a panel of judges, which APRA members then voted on. The winner will be the song that received the most votes and will be announced at a ceremony on 4 October.

Find out more about this year's finalists:

Marlon Williams – ‘Nobody Gets What They Want Anymore’

‘Nobody Gets What They Want Anymore’ is a duet with Aldous Harding and is from Williams’ second album Make Way For Love. The record is a break-up album about Harding, who Williams had previously had a relationship with.

Williams told RNZ in February that his and Harding’s parts were recorded separately, with Harding singing down the line from Cardiff, while Williams produced from Portland.

Williams says of the recording: “It was too weighty to be fun, but it was beautiful. There was something really beautiful about it even though it was painful, it felt properly cathartic for sure.”

This is Marlon Williams’ second time in the Top 5, after reaching the finals in 2015 for his song ‘Dark Child’.

Troy Kingi is an actor and musician from Northland, who made one of the best debut albums of 2016 in Guitar Party at Uncle’s Bach. ‘Aztechknowledgey’ is from Kingi’s second album Shake That Skinny Ass All the Way to Zygetron, which came out in late 2017 to critical acclaim. The album’s a soulful psychedelic jam underpinned by funk.

Kingi initially made a name for himself as an actor, with roles in films including Mt Zion and Hunt for the Wilderpeople, in which he played 'selfie dad'.

This is the first time one of Kingi’s songs has been included in the Silver Scroll Top 5. Kingi is also nominated for a Waiata Maori Music Award this year.

Chelsea Jade – ‘Laugh It Off’

Returning for the second year in a row, Chelsea Jade is shortlisted for her delightful synth-driven pop song ‘Laugh It Off’, from her debut album Personal Best. As RNZ’s Nick Bollinger puts it, the album is “made for moving to”.

The LA-based artist, formerly of Teacups and Watercolours, began her music career busking in Auckland’s Botany Town Centre. She went on to win the New Zealand Music Award’s Critic Choice prize in 2012 as Watercolours, and achieved massive chart success earlier this year with The Chainsmokers’ single 'You Owe Me', which she co-wrote.

Chelsea Jade was in the Scrolls Top 5 last year for her song ‘Life of the Party’.

The Beths – ‘Future Me Hates Me’

Elizabeth Stokes is lead singer and principal songwriter for Auckland power-pop group The Beths. ‘Future Me Hates Me’ is from the Beths’ excellent debut album of the same name. It’s a breezy, upbeat track typical of their style.

Third-time finalists and former winners Unknown Mortal Orchestra (Ruban Nielson, Kody Nielson, and Jacob Portrait) are back in the shortlist for 2018 with their easy-groove track ‘Hunnybee’. The track is from their new album Sex & Food, which came out earlier this year.

RNZ’s Nick Bollinger describes the song as “a sweet piece of disco-pop ostensibly written for his daughter, but with aphorisms for everyone”.

About the Silver Scrolls:

The APRA Silver Scroll is one of the most coveted awards in New Zealand music and has previously been awarded to artists such as Lorde, Ray Columbus, Shona Laing, Dave Dobbyn, Don McGlashan, Neil Finn, Chris Knox, and Tami Neilson.

It will be presented at a ceremony at Auckland’s Spark Arena on Thursday, 4 October.

Four other songwriting awards will be presented on the night: