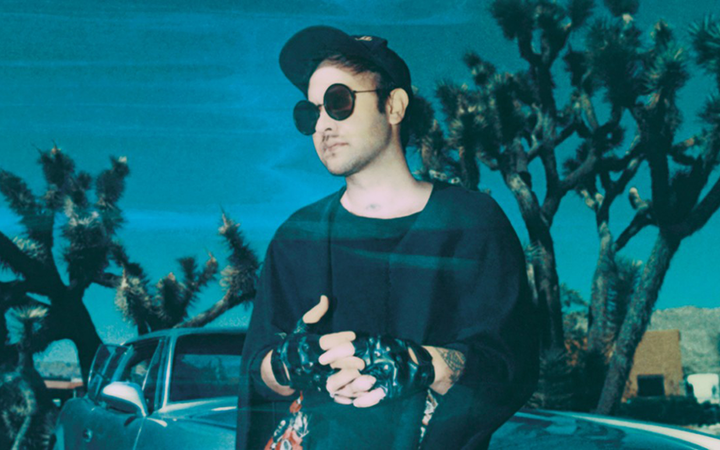 As a New Zealander living in America, Ruban Neilson has the advantage of both an inside and outsider’s view, and that unique perspective informs Unknown Mortal Orchestra’s fourth album. But there’s another thing that makes this record unique and surprising, and that is simply Neilson’s big, busy musical brain.

UMO's song 'Hunnybee' is a finalist at this year's Silver Scrolls. Karyn Hay is hosting live coverage of the ceremony on RNZ National, 101 FM from 9pm on Thursday 4th October.

2015’s Multi-Love was personal - you could say self-absorbed - with a number of the songs themed around Neilson’s experience as part of a love triangle. A glowing euphoria seemed to inform the whole disc.

But these new songs look outside that insular bubble.

‘We’re growing in a vicious garden’, Neilson sings, acknowledging that however blissful things may have been in his garden of love, elsewhere things are not so untroubled. In fact, for many of these songs, the place he’s reporting from is certifiably dystopian.

In ‘Ministry Of Alienation’ he pictures a ‘hostile wasteland’ where ‘my thinking is done by your machine’ and history is owned by Samael, the archangel of death.

In fact, ancient gods preside over much of the modern landscape conjured by these songs. Elsewhere you’ll meet Chronos, the Greek God of Time, in a tune Neilson ominously calls ‘Chronos Feasts On His Children’.

The imagery may be doom-laden, and yet the musical mood of that song remains delicate and light, with just Neilson’s fingerpicked guitar to accompany his graceful double-tracked melody.

It’s the kind of contrast he plays with throughout the album, not just within songs but from track to track. And that song slams straight into the album’s heaviest and, in some ways, defining moment. ‘Oh no, here it comes, the American guilt’ goes the chorus of ‘American Guilt’.

It’s not really clear whether it’s America’s culpability or its propensity for handwringing that is the source of Neilson’s alarm. Either way, the song paints a grim image of a place where the meek are bribed by Nazis, underscored with ferociously distorted riffs.

As for the rest of the album, it matches Neilson’s opaque yet visceral imagery – and at his best, he really is a lyricist who can grab you by the guts – with his free-ranging musicality.

Four albums in from UMO’s debut, there’s a recognisable Ruban Neilson style, though it inevitably borrows from his heroes. I hear traces of Miles Davis, Prince and, especially, Hendrix – whether it’s the driving riffs of ‘American Guilt’ and ‘Major League Chemicals’, or the sweeter melody of a song like this one, which reminds me of Hendrix’s ‘Electric Ladyland’ or his gorgeous posthumously released ‘Drifting’.

The title Sex and Food suggests Neilson hasn’t entirely discarded the carnal concerns of Multi-Love, but might be turning his attention more to the basics of survival. And ultimately survival is what this record is all about.

These are turbulent times, these psychedelically-tinged visions of Trump’s America repeatedly tell us. If there’s a way to survive them, it is by taking care of one another, and in song after song  Neilson seems to be acknowledging our responsibility to those around us.

There’s the swirling final track with its refrain ‘if you’re going to break yourself, you’re gonna break me’. And there’s ‘Hunnybee’, a sweet piece of disco-pop ostensibly written for his daughter, but with aphorisms for everyone. ‘Don’t be such a modern stranger’ he warns, and later plays a wonderfully wiggly Zappa-esque guitar.

Sex and Food feels like it could only have come out of America at this moment. It certainly doesn’t look away from the social ravages, yet it also finds traces of humanity, and wraps it all up in a complex musical imagination. When there’s music like this, there’s got to be some hope.

Sex and Food is available on Jajaguwar