The country's 55,000 practising nurses have emerged from a major row over pay and staffing that resulted in a multimillion-dollar deal and a commitment to better staffing long term.  But what sort of pressures are they really facing? Karen Brown spent time in a ward in Auckland City Hospital for Insight to find out more. 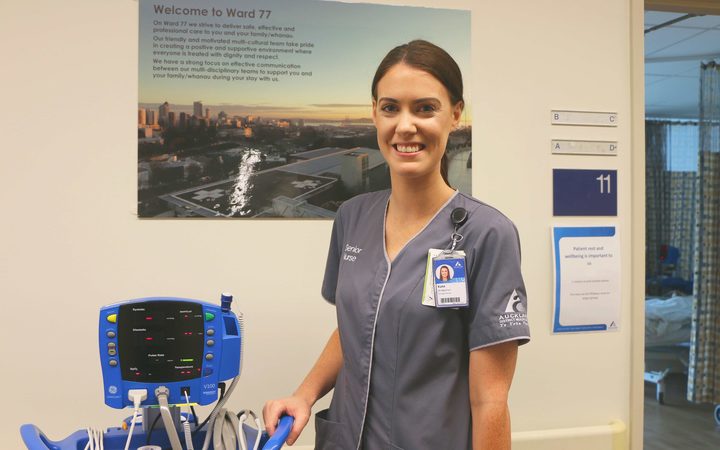 It's 7am at Ward 77 in Auckland City Hospital on a mid-winter day. It's quiet and orderly with the Queen City just waking up outside. The adult hospital is 97 percent full, the children's hospital is at 87 percent. That sounds full, but for this time of year the figures are good. For the nurses on duty in this orthopaedic ward, those numbers are manageable with the staff available on the ward today. That's in contrast to the crisis levels many have complained of, caused by increased patient demand and complexity, combined with under-staffing, which has led to burnout and worries about safety.

At the partly glass-enclosed heart of the ward Charge Nurse Kate Bridgeman, from Ireland, is wide awake and supremely well organised. It's the start of her shift and she's about to lead the first of many meeting (they call them huddles) during the day.

The day's plan is listed on a large whiteboard and 12 nurses (six coming off the night shift and six going on) are standing around. Ms Bridgeman starts on a cheerful note.

"Good morning everyone. Happy Friday.  How was the night shift?"

One nurse says there are some confused patients. There's no elaboration, but it could be dementia related as, being an orthopaedic ward, Ward 77 gets its fair share of older patients in for joint replacements.

"So far so good," chips in a male nurse.

"You made it," Kate Bridgeman quips. "Doing your best to keep everybody safe. And I'm sure you're looking forward to going to bed this morning!".

Enthusiastic and energetic, Kate Bridgeman is already throwing herself into the tasks that have to be accomplished everyday.

She goes through the list on the whiteboard; things the team can do better on, like traction and medications. There's also been resolution of concern about what medications to give pre-operatively. Today, however, good organisation and the nurse-to-patient ratio means everything is on track.

But worries over staffing are real, according to the Nurses Organisation's, Hilary Graham-Smith, who says she's heard horror stories of nurses stretched to breaking point.

"Often it's visible, they cry, they feel very afraid," she says. "I had a nurse say to me in a DHB recently that he has an anxiety attack before he goes on every single shift. And that's about the staffing and being scared that something will go wrong on his watch, and the consequences of that for him." 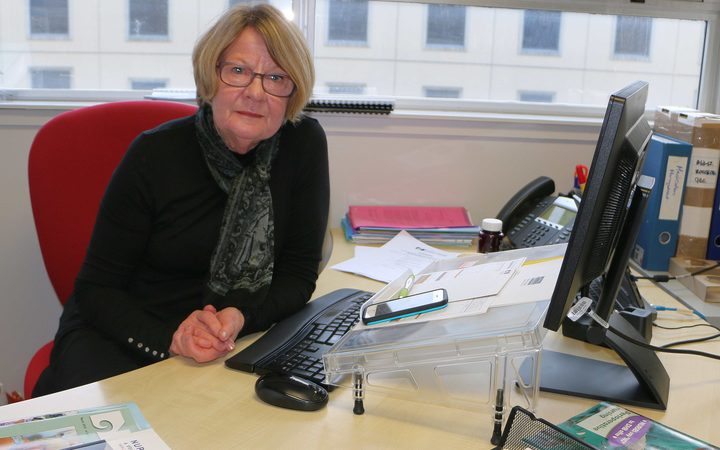 Hilary Graham-Smith adds that many nurses feel deep distress over not being able to deliver the care they want to. She says it's not unusual for nurses to do back-to-back shifts to fill gaps in rosters to make sure people are being properly looked after.

"It's absolutely exhausting, it's demoralising. That's when we see people leaving because they just can't tolerate the environment, it burns them out."

It was against this background that nurses and their union settled the pay dispute in early August, with significant pay rises, after a historic, day-long national nurses' strike on July 12, the first such strike in 30 years.

Shortly before nurses voted on that pay offer, an Accord was signed by the Government, DHBs and the Nurses Organisation. Once implemented, it's expected to revolutionise nurse staffing on wards, ensuring that exactly the right number of nurses is available instantly for any circumstance that arises. It's hoped the system will end bitter complaints about fatigue, stress and a lack of safety. 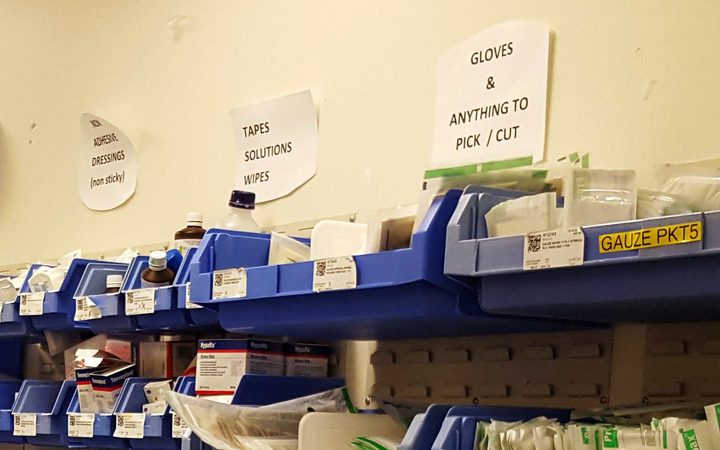 Aiming for efficiencies, Ward 77 has been declared a standout example for its well-organised medication room Photo: RNZ Insight / Karen Brown

That system relies on software called Trend Care, and there's a terminal in the nurses meeting area on Ward 77. Kate Bridgeman checks the screen to see how many patients they have, the patients' complexity or level of need, and the staffing in this ward and the two other orthopaedic wards.

"We do have some patients that are needing a lot of support that we're trying to keep as safe as possible. So our HCA's [healthcare assistants] will be...attenders with those patients...We can see that Roxanne [a nurse] will be a bit heavy for today so if we can all pull together and offer her as much support as we can, " Ms Bridgeman says

Kate Quinney, the nurse director for surgical, who's at the meeting, says the system, which is being rolled out progressively at Auckland City Hospital, enables a charge nurse to "escalate up" based on what the demand management system reveals during the day.

"Rather than sitting struggling, watching your team struggle, you've got people to call...The days of sitting suffering, we don't want that."

Ms Bridgeman notes there are two patients coming in for elective, or non-urgent, joint replacements. Some will be having complex, eight-hour long spine surgery during the day.

"Friday is a big spine procedure day, so that patient will be going to surgery pretty soon." That comes with its challenges too, says Ms Bridgeman: "It's often patients coming back to us in the evening and requiring a lot of care in the night. We all have to just bang together and provide all the care the patient might need." 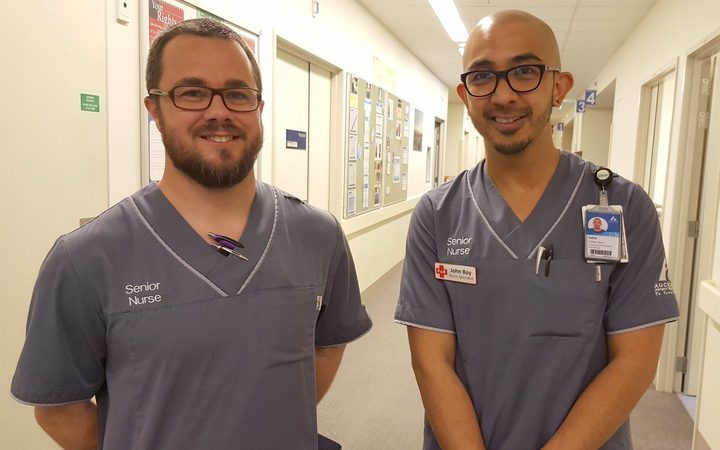 Mid-morning, a two-person team in the grey uniform of senior nurses checks in to see if there's anything they should be aware of. Their role is helping out with rapidly deteriorating patients. Nothing to do at the moment and before long they're off, responding to another call.

Being ready for anything and knowing how to manage it safely and seamlessly is the nurses' unspoken mission. Katie Quinney: "It's the unusual stuff, the unexpected stuff, that can just throw your plan. I don't think nursing's a job that you ever come in thinking you know how the day's going to roll. You don't ever come in knowing what your day's going to be like."

Staff nurse JoJo Azurin is on her second day of mornings, which she says are busy. She goes from the morning huddle to bedside handovers, where patients get to ask questions about their care. "At the moment I've got five patients under my care and four of them are on what they call the Acute Observations Unit, so we usually put patients there who are confused." 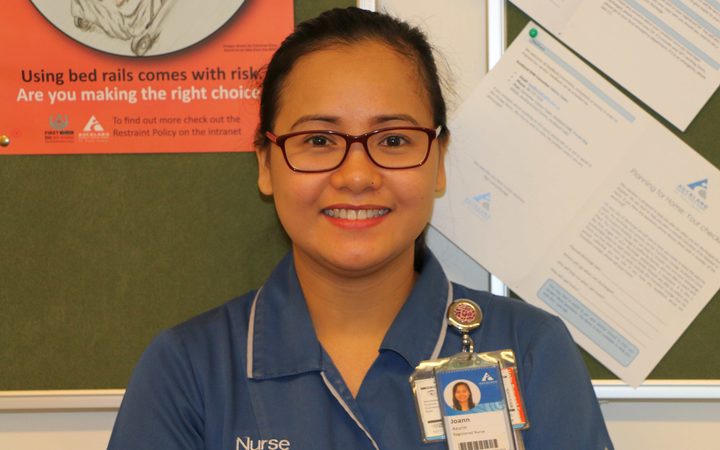 For Staff nurse JoJo Azurin, a good day is seeing patients get back on their feet. Photo: RNZ Insight / Karen Brown

Dementia is a factor in the ward, along with verbal and physical violence at times, says JoJo Azurin.

She is busy, but thriving. "Always busy," she says with a laugh, adding she tries hard to have her breaks.

But tensions can rise when busy becomes over-stretched. Asked about vacancy levels and the actual shortfall in nurses nationwide, the Health Ministry's acting Chief Nursing Officer, Jill Clendon, says: "We don't have good information on vacancies at the moment. It's not something that we collect at the Ministry."

But she says Care Capacity Demand Management will enable staffing requirements to be clearly identified in wards.  "Those DHBs that have already implemented CCDM, they have a really good understanding of what their requirements are, and they can tell us very clearly what their needs are."

Jill Clendon says CCDM has been around for more than a decade and there have been previous commitments to implement it which have not happened. "I think nurses have been fair to criticise that."  She says the commitment now is real; the Accord will implement the management CCDM, explore options for the employment and training of all nurses and midwifery graduates, and will develop a nurse and midwife retention policy. 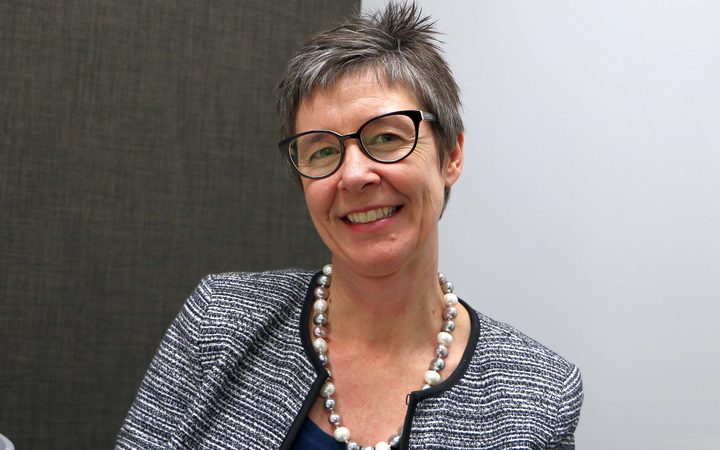 A spokesman for the 20 DHBs in the recent pay talks, Tairawhiti DHB Chief Executive Jim Green, concedes CCDM has not been comprehensively implemented yet. He says reasons include its complexity, and the number of "different moving parts", including the need for a DHB to have an acuity system first.

He agrees funding, or the lack of it, has also been a factor "... where there are significant increases in staffing required, then that has posed a problem for DHBs to go to that point to implement that".

"We've got a health system in New Zealand that in general terms works very well, but we know it's coming under pressure and we do know that there are a number of areas where we could be investing and should be investing more.  And so the issue around safe staffing is definitely up there for the things that DHBs have to attend to."

Jim Green is a former nurse and led DHBs in the pay talks that resulted in the 2004 "pay jolt" for nurses.  He says nursing has changed since he began but is still a good job.

"Nurses have a unique relationship with so many people that they're caring for, and the work that they do is extremely valued..."

He has "absolute faith" the pay deal and the Accord will restore trust and confidence among nurses.

Whatever the stresses, others too are motivated by the satisfaction of helping others get well.

That's certainly the case for JoJo Azurin who loves seeing patients on Ward 77 get up and on their feet once again.

"They start mobilising. You see them walking around and say 'Hi', and they say 'Thank you" when you do things for them." That's a good day.