Lives put on hold by the mosque attacks

Insight - A chef shot in the mosque attacks last year fears his young family will not be able to afford rent when they are moved out of their temporary housing. 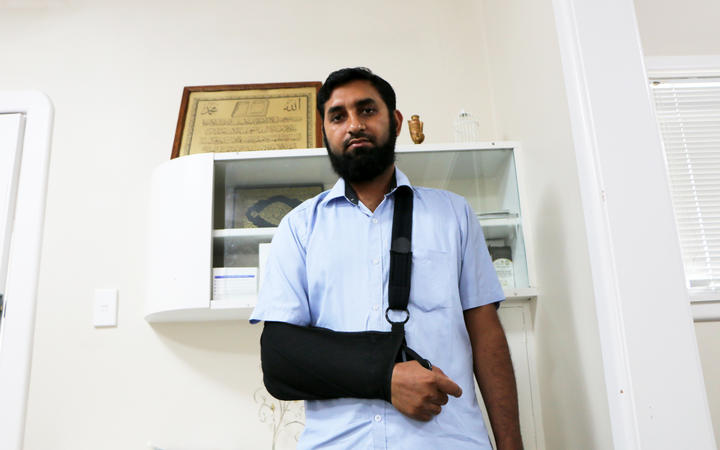 This Sunday marks one year since the terror attack on two Christchurch mosques that left 51 people dead, but life for the survivors has remained a struggle.

The bullet that struck Mohammad Sahadat's right shoulder in the Linwood mosque has continued to have a profound effect on the course his life is taking.

Speaking through a translator, he said he had come out of a fourth round of surgery aimed at returning some strength to his otherwise immobile right arm, but it became infected.

It was now more painful than it was immediately after the shootings, he said.

"After 15 March he was in hospital for one month, and after it was weak but not as painful. But now it's not weak but it's quite painful," the translator said.

The ongoing problems with his arm meant he was not able to return to work as a chef, or - for that matter - take on any sort of work.

"The biggest thing for him is the challenges that he has to face as far as being handicapped for everything and being dependent on everyone for everything.

"If he has to buy some food ... he has to ask someone to help him get something from up high. If he has to go to work ... he might have to ask people. Asking once or twice is fine but, you know, asking all the time hurts his self-esteem as well."

He has continued to support his wife and four young children on the modest amount of money he got from ACC, but it came nowhere near the amount he would need to pay for a private rental.

Nearly 12 months on, they were continuing to rely on temporary accommodation but even that is set to run out in less than two months.

Read more: A restaurateur, his chef and the terror attack that changed everything

They were told they were not eligible for long term social housing through Kāinga Ora, so after their accommodation ended, Sahadat and his family would have to find private housing.

"MSD (The Ministry of Social Development) helped him to get here. But still again it's temporary so they still have to keep looking at houses regularly, and he says he has to focus on his health as well, which is first and foremost, because that will affect his long term employment as well."

A statement from MSD said Sahadat and his family would be allowed to stay in their temporary accommodation until a suitable private rental was found.

The ministry said he has been taken to 11 private rental viewings and another two have been arranged for next week, which MSD hopes he will be well enough to attend. It said the family had a dedicated MSD case manager who was working alongside them.

However, Sahadat was still worried the family would be unable to pay rent.

In the days following the attacks, Prime Minister Jacinda Ardern made a pledge to help all of those affected by the mosque attacks.

Mohammad Sahadat and other victims met with her in Christchurch last week where he made a plea to her to fulfil her promise.

"He's really grateful that the government did what they did in the initial stages and helped his family come here immediately and that kind of stuff is really good, so the only thing they could do better ... is help with housing, because a lot of people are still suffering.

"That would be really great if they can help with some housing issues, especially long term."

The biggest factor in helping Sahadat recover had been his family flying to New Zealand from India to be with him. There was still no word on whether they would be granted permanent residency.

As of this week 173 family members of those bereaved or injured in the attacks on 15 March have been granted residency as part of the Christchurch Response Visa.

For those outside the country at the time, there have been 48 requests for ministerial intervention, of which 33 have been granted residency or temporary visas. Another 10 were turned down and five were still waiting for a response.