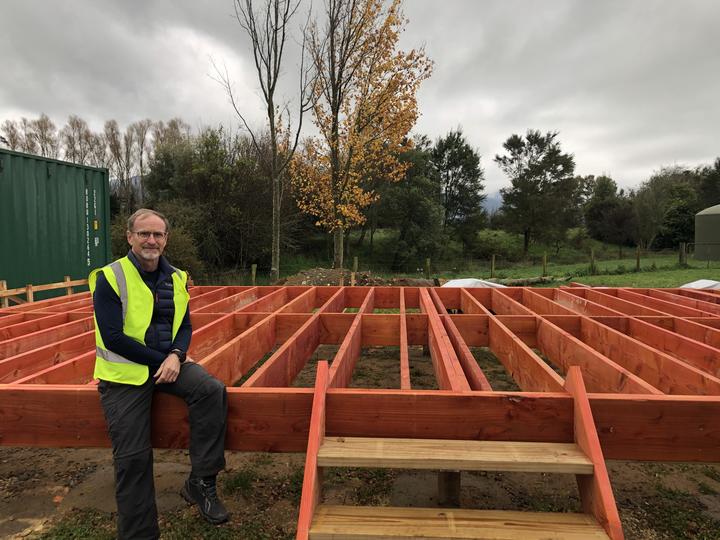 When Chris Bennett told people he wanted to build 100 affordable homes for $150,000 each in Golden Bay in the next three years, they said he'd never do it.

But number one house is underway, and within weeks a couple, will move in under a rent-to-own scheme.

Bennett is paying for the two-bedroom, 60 square metre house from his own retirement fund because he says there is no finance available in New Zealand for affordable housing.

Today The Detail visits Bennett on the site of that first house, just outside of Collingwood, to hear about his ambitious plans to build at least 30 houses a year for the next three years for people to either rent, or rent to buy.

The former World Bank civil engineer explains how he has set up Golden Bay/Mohua Affordable Housing Project with his formula for providing low cost homes for people in need.

Canadian-born, he came to New Zealand 40 years ago. He retired from his job less than two months ago after he suffered a serious head injury in a bike crash.

"My wife complained what does a World Banker with a brain injury do but try to solve the housing crisis."

Bennett emailed The Detail's Sharon Brettkelly after a podcast about the high cost of building homes in New Zealand, outlining his own project and the financial challenges.

He had been talking to a group of retired people in Takaka about his World Bank work when someone put up their hand and asked, "Chris, if you can do a project building 400-odd houses in Tonga after a cyclone in two years, can't you do something in Golden Bay for our housing crisis?"

Bennett accepted the challenge, and spent six weeks at the end of last year costing the project, working on plans with an architect specialising in small, affordable housing, and figuring out how to finance it.

The trust running the project has been offered 35 plots of land around the region for free, it has been offered some building materials at discount, local people have offered time and money, and Tasman District Council has already consented the house plans.

"A lot of these people want to be the solution to the affordable housing crisis. So they've come in and said, we love what you're doing, we're going to provide you with a heat pump, induction cook top, all the appliances at an extremely discounted price.

"We've had a company offering us European tapware at the cost they have to import it, the local concrete pumper is coming in saying, I'll give you a discount because I love what you are doing.

"Because people realise we are helping a community, we're not trying to make a profit, they want to get involved."

But Bennett is struggling to raise the $20 million needed to build 100 houses. He tells The Detail how he has approached tier one, two and three lenders, including banks and building societies and they have all rejected his appeal. He was also turned away by Kāinga Ora, and private funds and angel investors were only interested at lending him money at nine percent interest.

He tells The Detail there is a glimmer of hope and he is determined to exhaust all the options before he gives up.

"People say it can't be done, well, I'm pretty confident we can do it or I wouldn't be spending my own money doing it."