No one knew of Covid-19 three months ago. It didn't even have a name. But now it's the hot topic as it spreads across the world. 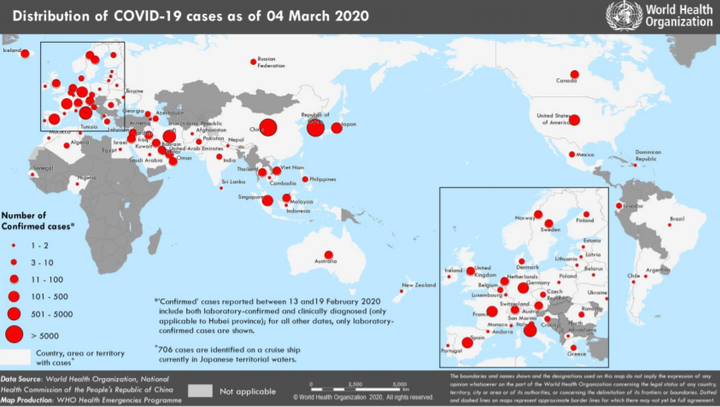 Countries, territories or areas with reported confirmed cases of Covid-19 as of 4 March. Photo: WHO

As the number of confirmed cases in New Zealand continues to rise, travel restrictions are extended, the public is warned against panic buying and scientists across the globe are trying to develop a vaccine.

Here's a timeline on the virus so far:

31 December, 2019: Coronavirus is first reported to the World Health Organisation (WHO). It is described as a pneumonia of unknown cause detected in Wuhan, China

9 January, 2019: WHO warns a cluster of 50 cases of pneumonia in Wuhan may be linked to a coronavirus

13 January, 2020: Thailand reports its first case of the novel coronavirus - the first outside of China

29 January: NZ government announces it will try to get New Zealanders out of Wuhan with help from Australia. China total cases at 5355, deaths reach 131. Virus reported in 15 other countries but no deaths outside China

2 February: New Zealand Prime Minister Jacinda Ardern announces a two-week travel ban on foreign nationals travelling from or through mainland China. The epidemic in China has peaked between 23 January and 2 February, and cases begin to decline in the country (WHO)

5 February: 3700 people on board the Diamond Princess cruise ship, off Yokohoma, Japan, begin a two-week quarantine after 10 people tested positive for the virus

6 February: Nearly 200 people, mostly New Zealanders, are evacuated from China and flown to Auckland, where they prepare to spend two weeks in quarantine. A New Zealander on board Diamond Princess tests positive for the virus

19 February: Passengers who tested negative for Covid-19 start to leave the Diamond Princess cruise ship. The 157 people at the Whangaparāoa navy base leave quarantine

27 February: WHO reports there are more new cases of the virus outside of China than inside. Cases globally top 80,000

28 February: The first case of coronavirus in New Zealand is confirmed. The woman had travelled from Iran to New Zealand on 26 February. New Zealand imposes travel restrictions on anyone travelling from Iran. Japan asks all schools to close until the end of the school year in late March.

29 February: WHO says the risk of spread and impact of the coronavirus is now "very high" at a global level, the highest level of alarm, but containment is still possible

2 March: New Zealand extends travel restrictions from Iran and China for a further seven days, while people arriving from northern Italy and South Korea are told to self-isolate.

3 March: WHO says nurses, doctors and frontline health workers are "dangerously ill-equipped" to care for Covid-19 patients. It warns industry must increase manufacturing of personal protective equipment by 40 percent to meet global demand

4 March: New Zealand's second confirmed case is a woman in her 30s who travelled to northern Italy, returning to New Zealand on 25 February. Scientists suggest there may be two types of coronavirus