The US central bank has slashed interest rates in response to mounting concerns about the economic impact of the coronavirus. 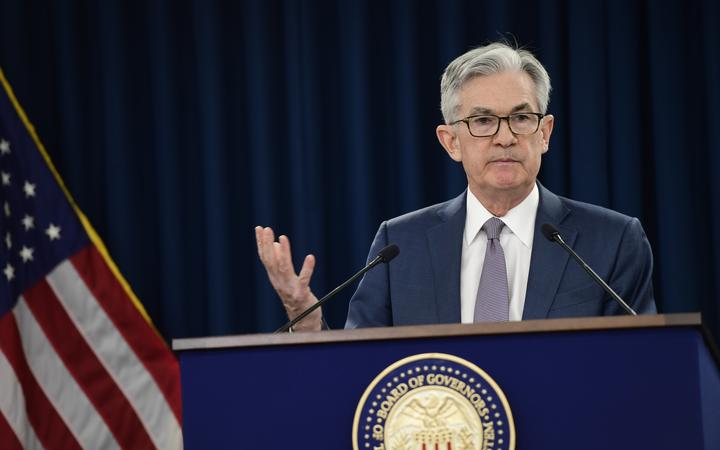 The Federal Reserve lowered its benchmark rate by 50 basis points to a range of 1 percent to 1.25 percent.

The emergency move comes after the G7 group of finance ministers pledged action earlier on Tuesday.

It follows warnings that slowdown from the outbreak could tip countries into recession.

Federal Reserve Chair Jerome Powell said the US economy remained strong but it was difficult to predict the "magnitude and persistence" of the effects of the spreading virus.

"The virus and the measures that are being taken to contain it will surely weigh on economic activity for some time, both here and abroad," he said at a press conference in Washington.

"We don't think we have all the answers. But we do believe that our action will provide a meaningful boost to the economy."

The last time the bank made an interest rate cut at an emergency meeting was during the global financial crisis of 2008.

The unanimous decision is a "dramatic turnaround from last week", when many Fed officials appeared confident that rates, already low by historical standards, would not need to be cut further, said Paul Ashworth, chief US economist at Capital Economics said.

"With financial markets in turmoil and evidence growing that the coronavirus is developing into a pandemic, the Fed's change of heart is entirely understandable," he said.

Many analysts in recent days had said they expected the Fed to act.

However, Peter Tuchman, a stock trader at Quattro Securities, said he did not think financial markets would necessarily welcome the move. "They're doing it to support the markets but that makes people fearful that we must be in bad shape," he told the BBC.

"To pull that bullet out so fast and so furiously leaves us with not that much ammo," he said.

Earlier on Tuesday, Australia's Reserve Bank (RBA) slashed interest rates from 0.75 percent to a fresh record low of just 0.5 percent as it seeks to contain the economic fallout from the escalating coronavirus crisis.

The RBA has now cut interest rates four times within the past year, amid a sluggish Australian economy that was in the midst of a housing downturn and a summer of bushfires.

"The coronavirus outbreak overseas is having a significant effect on the Australian economy at present, particularly in the education and travel sectors," said RBA governor Philip Lowe in his post-meeting statement.

"The uncertainty that it is creating is also likely to affect domestic spending. As a result, GDP growth in the March quarter is likely to be noticeably weaker than earlier expected."

The Organisation for Economic Cooperation and Development (OECD) has predicted that even a "mild and contained" outbreak of coronavirus would wipe 0.5 percentage points from Australia's economic growth this year.

Malaysia also cut interest rates as a result of the outbreak.

Financial Times senior investment commentator Michael Mackenzie expects the Federal Reserve to reduce rates further, and other major central banks to cut interest rates this month, including the Bank of England, Bank of Canada and the European Central Bank.

"Some people argue that interest rates are so low what can it really do to help. What I think ultimately it does is it it forces governments to spend money. You're going to need a fiscal stimulus here to offset the worst case scenario of the coronavirus - if we do see that," Mackenzie said.

"For some time monetary policy has been the only game in town and now you need to see governments be a lot more proactive as well.

Bagrie said New Zealand was in a "reasonable space" heading into a period of global unease.

"The government stepped up at the end last year with a pretty big stimulus package, the Reserve Bank already cut 75 basis points in 2019, the property market responded... New Zealand has had accelerated momentum."

Finance ministers from the G7 group of nations pledged to use "all appropriate policy tools" to tackle the economic impact of coronavirus.

The group of major economies said in a joint statement they were monitoring the outbreak and ready to deploy "fiscal measures".

On Monday, the Organisation for Economic Cooperation and Development (OECD) warned the global economy could grow at its slowest rate since 2009 this year because of the virus.

The influential think tank forecast growth of just 2.4 percent in 2020, down from 2.9 percent in November, but it said a longer "more intensive" outbreak could halve growth and tip many countries into recession.

Growth concerns contributed to sharp falls on major stock markets last week, but shares had started to rebound on Monday amid signs that governments and major central banks would work together to tackle the economic hit of coronavirus.

On Tuesday, shares briefly rallied on the decision before continuing to slide.