Travel restrictions for Iran and China have been extended for a further seven days, and people arriving from northern Italy and South Korea will be required to self-isolate, the Prime Minister has revealed.

Jacinda Ardern gave an update on the Covid-19 coronavirus today after the Cabinet meeting.

As well as extending the current travel restrictions, Ardern said the New Zealand government had decided that those arriving from northern Italy and South Korea would be required to isolate themselves for 14 days and to register with Healthline.

"This is a balanced and precautionary approach," she said.

She said New Zealand's only person confirmed to have caught the virus was in a stable and improving condition, and 15 passengers who were near that person on the flight into New Zealand had been contacted.

All but 10 passengers on the flight had been contacted, which was because of incorrect details given on their arrival cards.

"We wanted to contacted those passengers, to given them reassurance, to give them advice."

She said with 87,000 cases of coronavirus globally, it was known that self-isolation worked and had "proved its worth in recent weeks".

Ardern said she met health staff at Auckland Airport screening and those staffing Healthline over the weekend.

She said businesses affected by the virus would be helped, with an extra $4 million allocated to the programme after chambers of commerce across the country asked for help.

She said MSD teams were contacting employers on a daily basis.

Ardern said it was still too early "at this stage" to determine the extent of the impact of Covid-19. 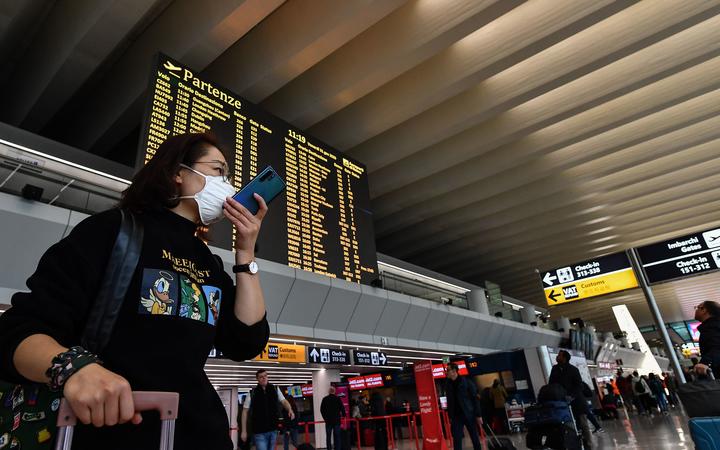 A passenger wearing a respiratory mask speaks on her smartphone by the departures board at Rome's Fiumicino airport. Photo: AFP

Today's briefing follows reports that two people in Nelson are being monitored for signs they have the virus, and the first death in Australia from the virus yesterday.

The first case of the virus in New Zealand was confirmed on Friday, when a person tested positive after returning from Iran via Bali.

The news prompted many to stock up on supplies, emptying supermarket shelves in some areas, which prompted warnings for people not to panic as well as warnings for the media to avoid panic-inducing headlines.

The Ministry of Foreign Affairs and Trade has also updated its travel advice on Iran.

Update from the Ministry of Health on testing

The Director General of Health, Ashley Bloomfield, said a number of people were tested today, and of those cases two were "close to the suspected case definition".

"They fulfilled the travel criteria, and have got symptoms that would be consistent with Covid-19."

About 140 tests for Covid-19 have been conducted around the country, he said.

Minister of Health David Clark told Checkpoint he had yet to be not briefed on the update of those two cases but results for testing generally came out later in the afternoon.

In regards to the patient in Auckland who tested positive, Dr Clark said the family members of the patient were going to be offered testing and he assumed that would have happened today.

As for the 15 passengers near the infected person, he said they were contacted and would have been told about the importance of self-isolation.

"They are going to be checked in with on a daily basis to make sure they are confident and reassured and also to monitor their wellbeing."

Dr Clark said people in self-isolation would be contacted, but "if there is any reason to suspect they are not, we've got the powers to enforce but historically where we've had outbreaks in previous administrations, I'm advised these powers are rarely invoked."

The travel conditions announced today were taken based on advice given after rising cases in the affected regions, including South Korea, Northern Italy and Iran.

"We're now ... rolling out cards when people arrive [internationally], messaging on airplanes, and also cards that people will receive alongside the formal documents they receive when they enter the country ... ones which do the task of self-registering people with Healthline and people can indicate there if they've been to those regions [with restrictions]," Dr Clark said.

Health officials have also been urging people to get winter flu vaccines this year. The Ministry of Health said the flu shot would not stop people getting Covid-19, but it would help prevent them getting seriously ill.

Last week, director of public health Caroline McElnay said it would not be easy dealing with cases of the new disease and the flu season at the same time.

Dr Clark said more flu vaccines have been ordered again this year to avoid a busy season amid the global Covid-19 outbreak.

"I am anticipating higher take up and that's why we've ordered more this year, and it's really good if people do ensure they get immunised."

The minister said the order of flu vaccines was made prior to the Covid-19 outbreak.

However, he had been reassured that Pharmac had ongoing conversations with suppliers to make sure they have sources available should they need more, Dr Clark said.

He said officials were talking with other countries about their strategies to learn from their experience.