The Covid-19 coronavirus has been described by a British virologist as like an iceberg, with only its tip currently visible. 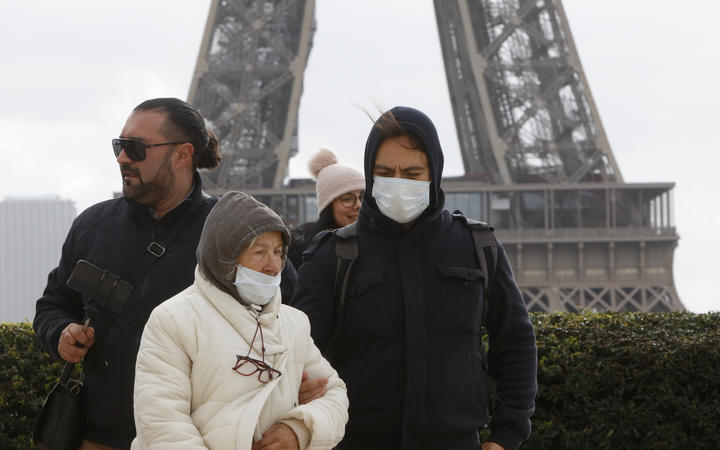 People around the world are wearing face masks to try to avoid catching Covid-19, including these visitors to the Eiffel Tower in Paris. Photo: Mehdi Taamallah/NurPhoto/ AFP

Some people could have the coronavirus with no symptoms, but still spread the virus to others, Cambridge University consultant virologist Dr Chris Smith told Kim Hill on Saturday Morning.

"People with more dramatic symptoms, that's the tip of the iceberg," Smith said.

"But below the water is an enormous body of infection... and we can't see that.

"It's encouraging if that's there in one regard, which is that if there's an enormous number of cases then the number that are severe as a proportion of the whole is much lower."

The incubation period for Covid-19 was as long as 11 days, so people might not immediately know they were sick or might test negative for the virus in the early stages, he said.

"That's why these viruses are so successful - they've had millions of years of head start over us in terms of evolving to be very good at spreading."

Covid-19 was about 10 times more lethal than flu and appeared to spread more easily, Smith said.

"Everybody on the planet's surface at the moment is susceptible to this new virus, because it's never circulated.

"There's no pre-existing immunity, so therefore you have a more infectious agent that's potentially a bit more lethal than flu, with an entirely susceptible human population.

"Allowed to just go for it, it could potentially claim even more lives than seasonal influenza does."

A Covid-19 vaccine could take about 18 months to develop and test, before it could safely be used, he said.

Most people infected with Covid-19 present to doctors with a temperature and a cough, while a few had sore throats and diarrhoea, Smith said.

Coronavirus can last for a couple of days on surfaces.

While hand sanitisers will kill the virus, "you can't beat soap and water", Smith said.

"In studies where people have looked at the recovery of various bacteria and viruses from people's skin, soap and water outperformed all the hand sanitisers."

Face masks from hardware stores were a "terrible con" that offered little protection from viruses, whereas properly fitted face masks worn with eye protection could help, he said.

There was little evidence to suggest vitamin C would be effective to help prevent the disease, Smith said.

Age and co-existing health conditions - such as chronic lung, heart, or renal disease and diabetes - were the main risk factors, and little could be done about them, he said.

Air conditioning on planes was unlikely to be a vector spreading the virus, so only passengers sitting near an infected person were at risk.

However, airports generally were high risk areas, with passengers in close contact and touching the same surfaces, he said.

People at higher risk might want to reconsider overseas travel plans, while young, fit people might not need to avoid travel.

The virus appeared to have surfaced in November or December last year in a market in Wuhan, China, Smith said.

"We've pretty much tracked down where this thing came from. It looks very very, similar to a virus which is found in pangolins, and they're traded en masse in Chinese markets, that's why they're now an endangered species."