A man has died of the Wuhan coronavirus outside China, and any foreign travellers who leave from or transit through China will be refused entry to New Zealand from tomorrow. 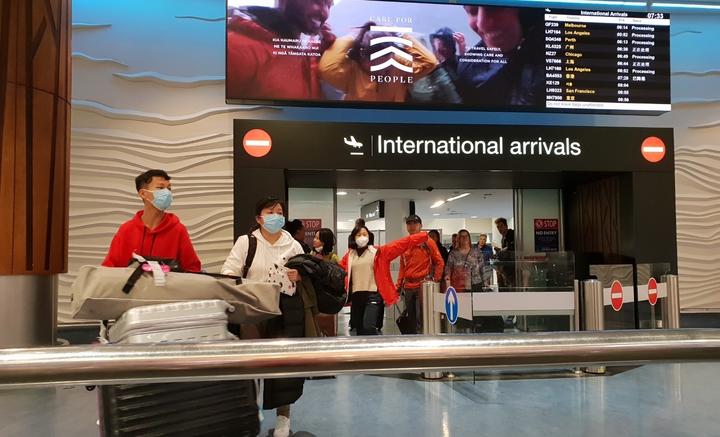 Passengers from international flights at Auckland Airport after flights from China had touched down earlier this week. Photo: RNZ / Liu Chen

A 44-year-old Chinese man from the city of Wuhan, where the new coronavirus was first detected, died today in hospital in the Philippines, the country's Department of Health has said.

The World Health Organisation has confirmed it is the first death from the virus outside China.

The New Zealand government announced at a press conference this afternoon that strict travel restrictions have been introduced in response to the outbreak.

Any foreign travellers on their way to New Zealand when the announcement was made will be subject to increased screening on arrival. If they are cleared, they will be allowed into the country.

New Zealand citizens and permanent residents, and their immediate family, will be allowed to enter the country but will need to isolate themselves for 14 days after arrival.

The restrictions will be in effect for up to 14 days, reviewed every 48 hours.

The Ministry for Foreign Affairs and Trade has also raised its travel advice for China to "Do not travel", the highest level.

"Cabinet convened last night to discuss the most up-to-date public health advice, and recent developments in the spread of the virus," Prime Minister Jacinda Ardern said.

"We have been advised by health officials that while there are still a range of unknowns in the way the virus is being transmitted, we should take a precautionary approach and temporarily stop travel into New Zealand from mainland China, and of people who have recently been in China."

She said the measures were critically important to protect New Zealanders, and to play a part in global efforts to contain the virus.

"I am particularly mindful that we are a gateway to the Pacific, and must factor that into our decision making," Ardern said.

The US and Australia are among other countries who had earlier announced similar restrictions.

"We have been in close contact with our partners in the past 24 hours, and I have spoken on multiple occasions with [Australian] Prime Minister Morrison to ensure we are each aware of any changes to our systems, and the wider impacts given the frequent travel between our two nations," Ardern said.

"The decision of the US to put in place similar restrictions to those decided by Cabinet has had a knock on effect in terms of travel, leading Air New Zealand and other airlines to stop their flights from China."

Air New Zealand has announced it will suspend its Auckland Shanghai route from today until 29 March.

Its service departing Shanghai Pudong International Airport shortly after 2pm local time will be the airline's final flight on this route for two months. Tonight's Auckland-Shanghai service is cancelled.

Ministers will be working with industry leaders to try to lessen economic effects of the restrictions, including on tourism, education and the primary sector, Ardern said.

Global health authorities have advised against such measures.

"Travel restrictions can cause more harm than good by hindering info-sharing, medical supply chains and harming economies," the head of the World Health Organization said on Friday.

The WHO recommends introducing screening at official border crossings. It has warned that closing borders could accelerate the spread of the virus, with travellers entering countries unofficially.

"Just as the WHO recommended against travel restrictions, the US rushed in the opposite direction," foreign ministry spokeswoman Hua Chunying said. "[It is] certainly not a gesture of goodwill."

Deputy Prime Minister and Foreign Minister Winston Peters said the decision had not been taken lightly.

"This is a public health decision. New Zealand has not had a confirmed case of the virus and the risk of outbreak is low and we want to keep it that way. The health and safety of New Zealanders is our main priority.

"The outbreak has been well managed by China, and these temporary measures are to reinforce work being done to try and reduce human to human transmission."

Peters said he had been in close contact with Chinese authorities about New Zealand's decision, and indicated New Zealand wanted to help "with China's efforts to control and defeat the virus".