Catholics taking part in church services across Australia this weekend could see their traditions of worship changed due to the Covid-19 coronavirus. 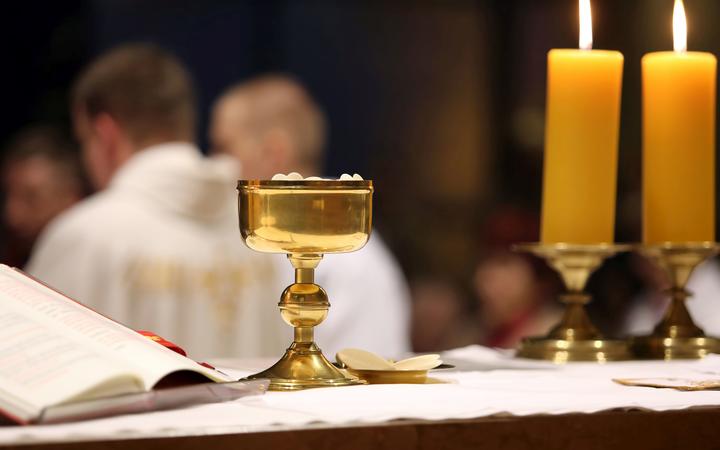 Communion wafers will be given in the hand rather than placed on the tongue throughout Australia, if parishes adopt recommendations from their bishops to reduce the spread of coronavirus. Photo: 123RF

The Australian Catholic Bishops Conference has urged a number of measures to reduce transmission of the virus, including stopping communion being distributed from the chalice and the removal of holy water from stoups.

In a statement, the conference said dioceses and parishes should consider the changes "given the regular assembly of large groups for liturgical celebrations and a number of enquiries from dioceses, parishes and individuals".

It said churchgoers should consider their own health "including any potential to infect others with a contagious disease" before attending services.

"Holy water should be temporarily removed from stoups at the doors of churches to reduce the possibility of transmission of the virus," the statement said.

"When exchanging the sign of peace, individuals should avoid shaking hands but offer a smile, wave, nod or bow.

"Parishes should cease distributing holy communion from the chalice until further notice."

There was also a recommendation that the communion wafer be given in the hand "because of the high risk of transmission if people continue to receive on the tongue".

In South Australia, the Archdiocese of Adelaide has asked that the measures be implemented by Sunday.

Penola parish priest Michael Romeo said one of the protocols priests had been asked to observe was proving more difficult than others to put into practice.

"We've been asked to put alcohol-based gels or rubs available at the entrance of our churches, but that's proving a little difficult because they're not available at shops at the moment," he said.

Not such a break with tradition

"I took the initiative myself to stop distribution of holy communion from the chalice," he said.

"That was just something I discerned myself - I thought 'ughh' it's probably a good idea during this season."

He said it was also a good teaching moment.

"Just to make people aware - as Catholics you're actually not obliged to receive communion from the chalice - it gives us a fuller sign of receiving holy communion," he said.

"But we still believe we receive the fullness of Jesus in holy communion under the form of the host."

Father Michael said the removal of holy water from the fonts would be a change of practice for many Catholics, but overall the measures should not be too much of a change.

"Some people will see some of this as an overabundance of caution on behalf of the [Catholic Archdiocese of Adelaide], but as Catholics we look to our Bishop for guidance in all difficult matters - especially this one," he said.

"Hopefully it doesn't disrupt our worship too much."