Two New South Wales Rural Fire Service volunteers have died and three other firefighters are injured after their truck rolled in Sydney's south-west. 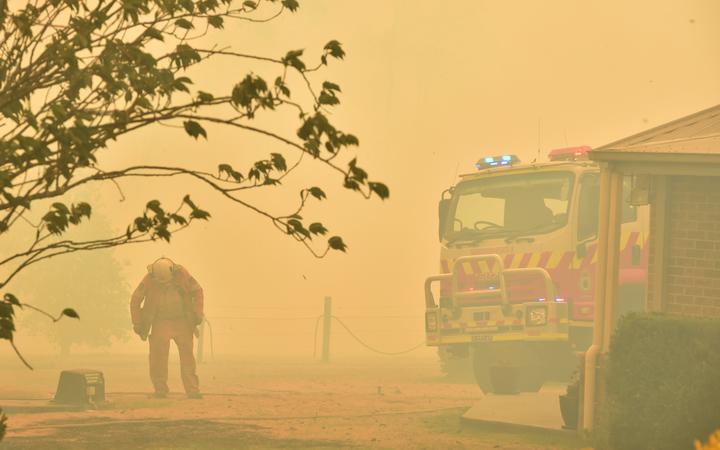 A firefighter at Balmoral, 150km south-west of Sydney where an out of control fire destroyed a home on Thursday. Gusty conditions pushed heat and smoke across greater Sydney. Photo: AFP

Authorities said the truck was travelling as part of a convoy when it is believed to have hit a tree on Wilson Drive in Buxton, before rolling off the road just before 11:30pm.

The driver and a front passenger died at the scene. They have neen named as Geoff Keaton, 32, and Andrew O'Dwyer, 36, both fathers to young children. Three other passengers were injured and treated at the scene by NSW Ambulance paramedics.

The scene is on the front line of the Green Wattle Creek fire, one of three bushfires burning at emergency level overnight.

The incident came at the end of a dangerous day of fires and heatwave conditions across Greater Sydney, with four bushfires flaring to emergency level throughout the day and at least 20 properties destroyed.

Three firefighters sustained serious injuries earlier in the day after being "overrun" by a blaze at Balmoral, also south-west of Sydney. A 36-year-old and a 56-year-old were airlifted to hospital with serious face, arm and chest injuries, while a 28-year-old woman was transported by ambulance to hospital.

Nullarbor was the hottest spot around the state, reaching an incredible 49.9C - the fourth hottest temperature ever recorded in Australia, overtaking Eucla in WA which reached that mark just hours earlier.

Adelaide reached 45.3C on Thursday, its highest top temperature for the month of December since records began in 1887, and is forecast to reach 46C today.

Road surfaces melted in Port Augusta where temperatures rose above 48C and residents were warned to stay off the worst affected routes.

The heatwave conditions were forecast to take a dangerous turn tomorrow with extreme temperatures and high winds combining to produce catastrophic bushfire conditions in six districts.

While South Australia broke the December location record with its 49.9 degrees, the all-time location record for maximum temperature (50.7C at Oodnadatta in 1960) still stands.

But on Wednesday, the average maximum temperature from around the country - at 41.9C - a whole degree over the record set a day earlier.

The nation's average maximum temperature on Tuesday was 40.7C, beating the mark of 40.3C that had stood since January 2013.

Greg Allen of the New South Wales rural fire service said 100 fires were burning across the state and just over 50 were yet to be contained.

The two worst blazes were at Green Wattle Creek and Gospers Mountain, both on the outskirts of the greater Sydney region, and at Kerry Ridge fire further north.

Conditions eased slightly overnight but the fire service was preparing for another huge day of increased temperatures, strong winds and very low humidity.

"[On] Saturday we'll be seeing again severe and extreme fire danger ratings for a lot of parts of New South Wales," Allen said.

Some fires have been burning since July or August, he said. The Gospers Mountain fire has burned through more than 400,000 hectares.

Though there was firefighting support from other countries, NSW firefighters, including volunteers, were getting tired and there was a long season ahead of them, Allen said.