Donald Trump has become only the third US president in history to be impeached by the House of Representatives.

The Democrat-controlled House has voted to impeach the Republican president on two charges of abuse of power and obstructing Congress. 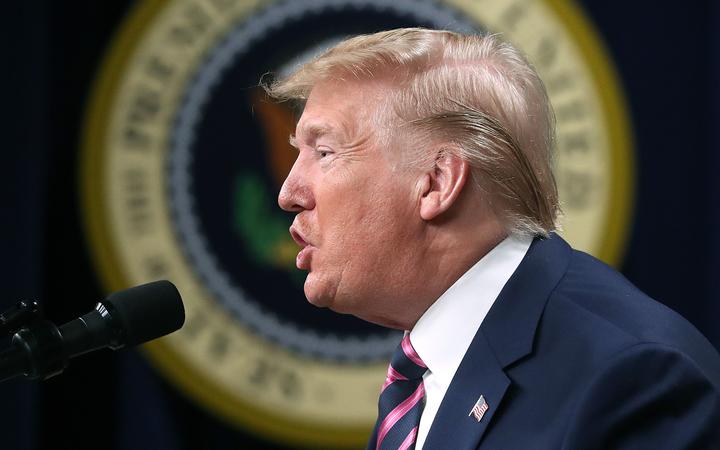 The vote for the first article of impeachment, abuse of power, was passed 230-197 and the second, for obstruction of Congress, 229-198.

Trump will now face a Senate trial next month, but members of his party control that chamber and it is unlikely to remove him from office.

He told a cheering crowd in Battle Creek, Michigan: "While we're creating jobs and fighting for Michigan, the radical left in Congress is consumed with envy and hatred and rage, you see what's going on."

The White House released a statement saying that the president was "confident that he will be fully exonerated" in a Senate trial.

The proceedings began with members of Trump's Republican Party calling for votes on procedural issues in an effort to frustrate the process.

That was followed by a vote on the rules to be set out for the impeachment, which kicked off 10 hours of partisan debate on the merits of the two impeachment charges against President Trump.

The president has previously called the process an "attempted coup" and a "scam".

In a six-page letter on the eve of the vote, the 45th president of the United States argued he had been treated worse than "those accused in the Salem witch trials".

Surveys suggest the country is split on the process. US political website FiveThirtyEight's collection of national polls shows just over 47 percent back impeachment, while 46.4 percent oppose it.

As impeachment was debated in the House this morning, Trump was flying to Battle Creek, Michigan, for a 'Merry Christmas' rally along with vice-president Mike Pence.

Before the vote, all but a handful of the 232 House Democrats said they would back impeachment. Nearly 200 Republicans were united in opposition.

The first is abuse of power. It accuses the president of trying to pressure Ukraine to smear his political rival, Democratic presidential contender Joe Biden.

Trump and his conservative allies have alleged without evidence that while he was US vice-president, Biden encouraged Ukraine to fire its top prosecutor in order to stop him investigating a Ukrainian gas company that employed his son, Hunter Biden, as a board member.

Democrats say Trump dangled $US400m of US military aid and the prospect of a coveted White House meeting for Ukrainian President Volodymyr Zelensky as bargaining chips to prod the US ally into announcing a corruption inquiry into the Bidens.

The second charge is obstructing Congress. Trump, who blocked his aides from testifying, is accused of failing to co-operate with the House impeachment investigation.

The president has denied withholding US aid to benefit himself politically and maintains it was appropriate to ask Ukraine to look into alleged corruption.

Under the US constitution, a president "shall be removed from office on impeachment for, and conviction of, treason, bribery, or other high crimes or misdemeanours". It is a political process, not a legal one. 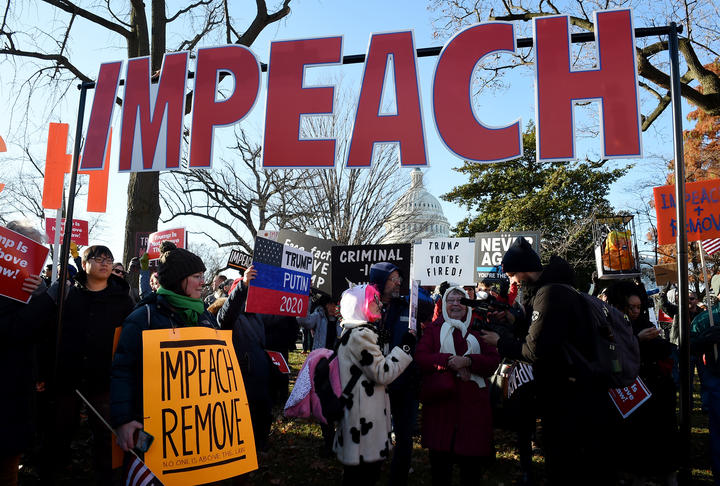 People rally in support of impeachment in front of the US Capitol, as the House readies to vote. Photo: AFP

What will happen in the Senate?

Proceedings go on to the Republican-controlled Senate for a trial in January.

If two-thirds of senators voted to convict the president, he would be removed from office. But Democrats can only muster 47 votes in the 100-seat upper chamber, and they need 67 to pass the measure.

No-one expects at least 20 of Trump's fellow Republicans to join with Democrats and end his presidency.

Senate Republican leader Mitch McConnell said on Tuesday he was under no obligation to be even-handed in his handling of the proceeding.

"I'm not an impartial juror," the Kentucky senator told reporters. "This is a political process. I'm not impartial about this at all."

What is the precedent?

Two US presidents have been impeached - Andrew Johnson in 1868 and Bill Clinton in 1998 - but in both cases the Senate did not vote to force them from office.

Richard Nixon resigned the presidency in August 1974 when it became clear he would be impeached and ousted by Congress in the wake of the Watergate scandal.