Bushfires this season have officially burnt the most land on modern record across eastern New South Wales. 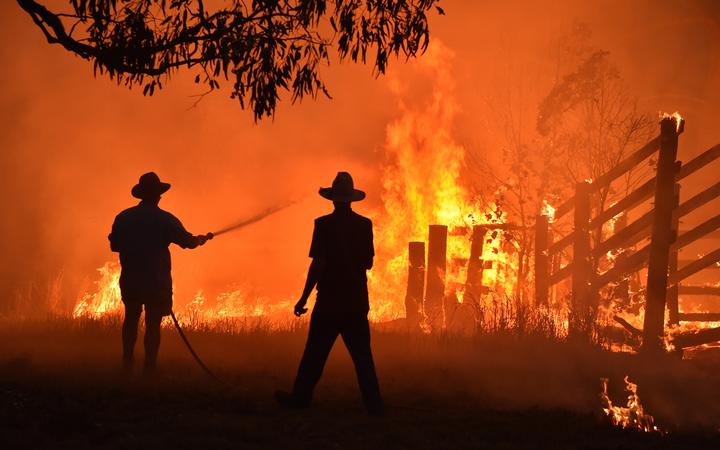 Residents defending a property from a bushfire at Hillsville, near Taree, 350km north of Sydney on 12 November. Photo: AFP

Even by the end of spring, the extent of the fires was exceptional; more than 1.65 million hectares had been burnt in New South Wales.

On 9 December, NSW Rural Fire Service Commissioner Shane Fitzsimmons tweeted that fires had burnt about 2.7 million hectares - an area greater than the country of Wales.

Between early September and the end of November, 220,000 hectares had been burnt in Queensland and still the fires rage on.

Fires have already occurred in every Australian state and territory this season.

Normally, it would now only be the beginning of the fire season in the southern states, and traditionally the northern fire season would be winding down as summer rains arrived, but there is no indication that rain is coming any time soon.

The fire danger wasn't just restricted to the east coast, with the rating for Australia as a whole far and away the highest on record for spring since 1950.

"Spring 2019 saw the highest fire weather danger as measured by the Forest Fire Danger Index (FFDI), with record-high values observed in areas of all states and territories," the report stated.

The danger index takes into account recent rainfall, a drought index, relative humidity, air temperature and wind speed to give a value that reflects how dangerous a fire is expected to be once it gets going. That value is represented on roadside fire danger signs as low, high, very high, extreme, catastrophic (code red in Victoria).

"More than 95 percent of Australia by area had spring-accumulated FFDI values that were very much above average (highest 10 per cent of years), including almost 60 percent of the country that was highest on record for spring," the report stated.

Other big fire years for NSW

There is a big difference in fires depending on where they are in New South Wales.

As a general rule, fires west of the Great Dividing Range are often more widespread, but because of lower fuel loads they burn with a lower intensity.

Fires on or east of the range, in more densely forested areas, burn with a greater intensity; when that intensity is combined with higher population density, there is greater risk.

According to the report, the closest season compared to 2019 was 1968, but even it was less extensive than this year.

Those fires also took place under severe drought conditions and were limited to the Hunter and Illawarra regions.

The 1968 season had a number of major fires, including one in the Blue Mountains that burnt for more than a month - the Australian Disaster Resilience Knowledge Hub attributes the Blue Mountains and Illawarra bushfire with burning through 1.5 million hectares.

Other major fires in eastern NSW include:

With the current heat event, South Australia is bracing for dangerous fire conditions until a cool change late Friday.

The worst of the fire danger is then expected to return to New South Wales on Saturday ahead of the change, with continued elevated fire danger in Queensland.