The father of a 12-year-old boy who was rescued along with his dog while trying to escape a bushfire in Western Australia says he is proud and relieved to be reunited with his son. 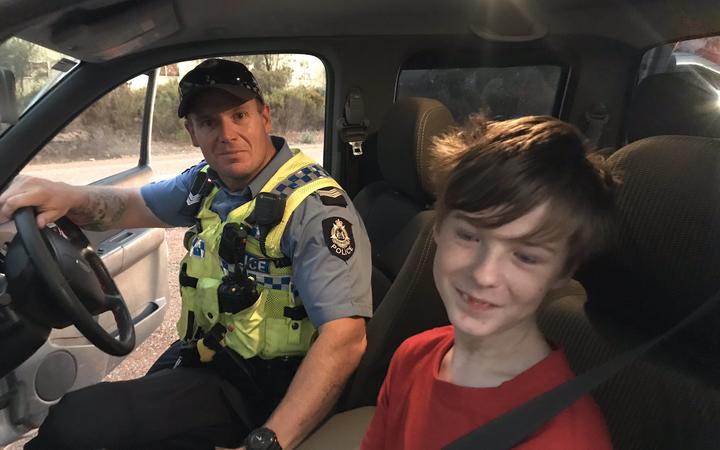 Lucas Sturrock (right) was found by police after driving across paddocks to escape a bushfire. Photo: Dalwallinu Police via ABC

Lucas Sturrock was alone at home when a fast-moving blaze threatened the town of Mogumber, north of Perth, on Sunday.

His dad, Ivan Sturrock, and older brother were out fighting the fire as it ripped through the area.

"I said to my son [Lucas] if [the fire] gets into the big paddock, go down to the orange tree that's about 3 or 4 kilometres away," Ivan Sturrock said.

When the fire approached, Lucas grabbed the family's two-year-old dog and jumped in his older brother's ute.

"Then when he got there [to the orange tree] the fire was on the other side of the road, so he went down to Gillingarra Road," Sturrock said.

When Sturrock and his other son went to the orange tree and found Lucas was not there, panic set in and they reported him missing.

About an hour later, firefighters who were battling the blaze nearby came across the boy behind the wheel of the vehicle and pulled him over.

"Typical farm boy, he was pretty clever, I think the problem was he just didn't quite know where to go and it was hard to see with all the smoke," Craig Spencer, of the Bindoon Bushfire Brigade, told ABC Radio Perth.

"So I think he probably panicked a bit and when we found him he was pulled up on the side of the road."

With the Help of DFES, Dalwallinu Officer S/C SMITH saved this 12 year old who was driving across paddocks to escape the fire in Mogumber. He has been reunited with family and is safe and well #fb pic.twitter.com/zyrYCFgwSM

The fire crew took him to safety and left him with police, who reunited him with his father.

Mr Sturrock said he was proud of his son.

"We taught him to drive since he was about seven just in case things like this do happen and I was quite proud of him; he did exactly what we told him to do," Mr Sturrock told ABC News.

Dalwallinu police officer Michael Daley, who reunited the boy with his father, urged families to "have a plan and know it" if a bushfire threatened their home.

Emergency warnings for dangerous bushfires have been issued in eastern and western Australia.

In the state of Western Australia, firefighters have been battling a bushfire north of Perth for six days.

The blaze, which has engulfed more than 13,000 hectares of land, was downgraded on Monday, with evacuated residents expected to return home.

Meanwhile, authorities issued fresh warnings about a "mega blaze" after it spread beyond containment lines and razed 20 houses near Sydney.

How bad are the bushfires in Australia?

Since September, six people have died in a bushfire crisis that has engulfed Australia, particularly the eastern states of New South Wales (NSW) and Queensland.

The blazes have destroyed more than 700 homes and blanketed towns and cities in smoke.

The bushfires and extreme weather have ravaged Australia's landscape, sparking public debate about the need for stronger climate action.

A heatwave sweeping east across the country is also expected to increase the fire risk this coming week.

Across the nation, temperatures are set to exceed 40C in many areas. Parts of Sydney could reach 46C by the end of the week, meteorologists say.