Australia's bushfires have caused a rare spike in carbon monoxide levels as far as Central Otago. 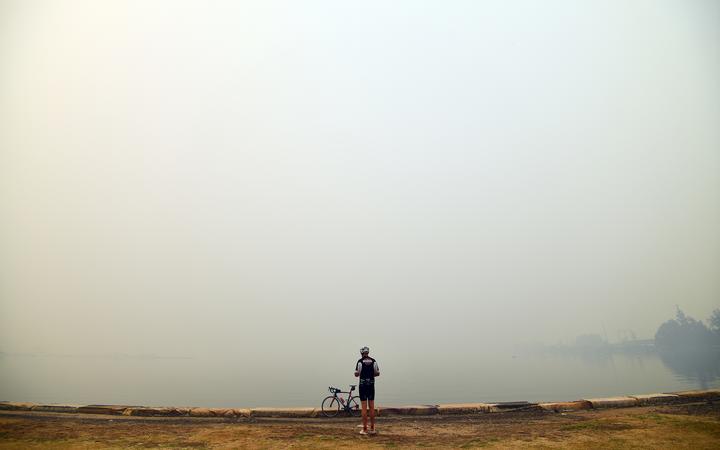 A cyclist takes pictures of smoke from bushfires in Gosford north of Sydney, on Tuesday. Sydney was shrouded in smoke from the bushfires yesterday with pollution recorded at more than 11 times hazardous levels. Photo: AFP

Researchers at NIWA's Lauder atmospheric research station near Alexandra say high levels of the poisonous gas have been detected just above ground for several weeks.

"The only time we would see an occasional spike in carbon monoxide readings is when there is a local burn-off. It is very rare to have such a prolonged spike measured at ground level.

"In the past such Australian fire plumes were only detected several kilometres up in the atmosphere, that air never reached down this low."

A shroud of smoke from Australia's bushfires caused chaos in Sydney yesterday, raising pollution to more than 11 times hazardous levels, setting off smoke alarms and ruining visibility. The haze was described by many people as the thickest to blanket the city amid this year's fire crisis.

Mr Smale said the measurements made at ground level in New Zealand from events in Australia were very uncommon, not entirely understood and are a focus of future research concerning atmospheric transport.

The measurements coincided with a plume of smoke blown across the Tasman Sea from the fires that has resulted in hazy skies and deep coloured sunsets across the country at different times. 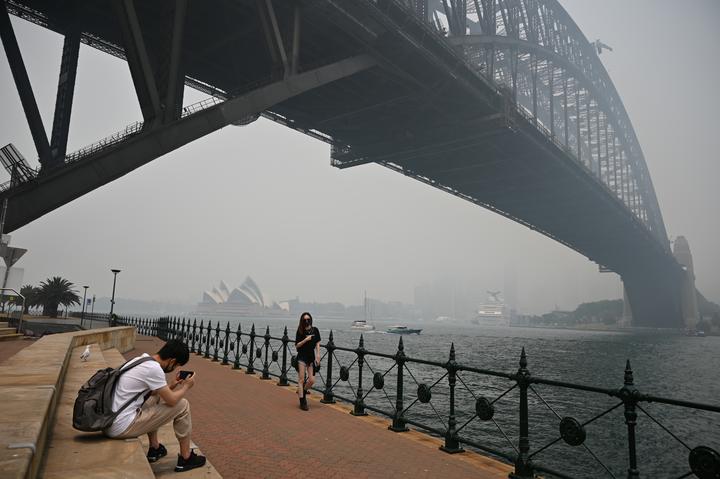 Tourists wearing masks take photos under the Sydney Harbour Bridge enveloped in haze caused by nearby bushfires, in Sydney on December 10, 2019. Photo: AFP

Meanwhile, NIWA air quality scientist Dr Ian Longley said the bushfire smoke has had a particularly strong influence over New Zealand in the past week.

"Since December 1 elevated levels of particulate matter have been recorded almost everywhere air monitoring is conducted. However, a more prolonged influence was observed across the upper and central North Island."

Dr Longley said concentrations started rising last Tuesday and Wednesday, and by Thursday they were three to four times higher than normal across Auckland, Northland, Waikato, Manawatu and Hawke's Bay.

On Friday most North Island towns recorded levels ranging from 36 to 54 micrograms. Levels in Sydney, however, were about three times that.

Dr Longley said ordinarily, the National Environmental Standard of 50 micrograms per cubic metre was only exceeded on cold winter nights and in areas with high concentrations of homes using wood for home heating.

"However, the high levels of particulate matter recorded last week were unusual due to their extensiveness, appearing to cover most of the North and some of the South Island for several days."

By Sunday, air quality in North Island was back to normal, but high concentrations were still sporadically impacting some South Island spots.