Protesters have stood on the road to block a packed replacement bus in Auckland, as a dispute between a bus company and its drivers ramps up. 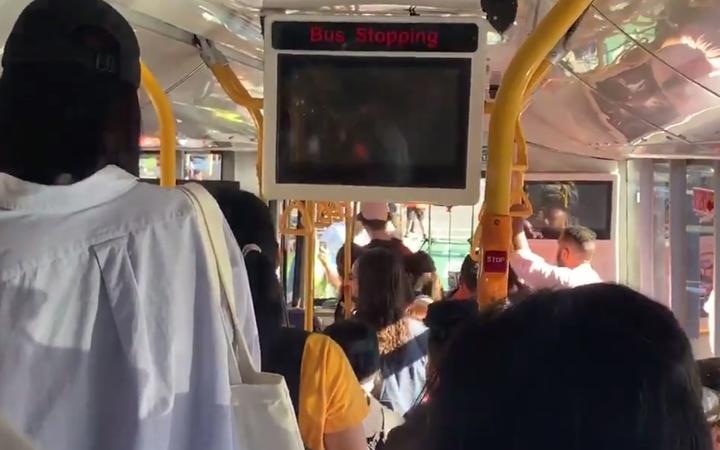 Demonstrators blocked the path of a replacement bus and surrounded it as a dispute in Auckland escalates. Photo: RNZ / Alex Ashton

Services on some of Auckland's main routes have been cancelled until Christmas after NZ Bus locked out its drivers for refusing to take fares.

A small number of replacement services are being run on the routes by Ritchies.

When one replacement bus encountered a NZ Bus drivers' protest at the corner of Dominion and Balmoral Roads, demonstrators blocked its path and surrounded it.

A protester then boarded the bus and began arguing with the driver.

Very very tense argument, definitely nostalgic of sitting awkwardly while your friends argue w their parents. We’re off now though! Also am available for filming weddings and other events, apologies for Dad zoom pic.twitter.com/m2WaVcmCYW

An RNZ reporter on board said the bus was eventually allowed to continue.

NZ Bus drivers have been striking for better pay and conditions and stopped taking fares last week in protest.

But the company then suspended 800 drivers, prompting Auckland Transport to cancel the bus services along several routes, including Dominion, Sandringham, Manukau and Mt Eden Roads until at least Christmas.

First Union and the company held negotiations on Monday, after an eleventh-hour meeting on Sunday night failed to reach a resolution, but they could not reach any agreement.

Auckland bus disruption: What you need to know