Fighting the threat of terrorism was a none-too-subtle theme at one of Donald Trump's latest rallies in New Hampshire, as the state prepared to hold the first presidential primary vote in the race to select the United States' next leader. 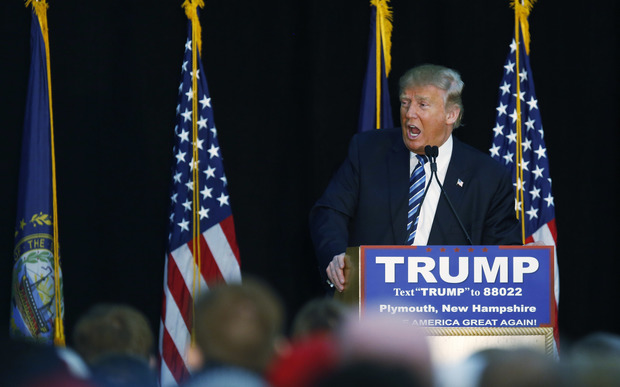 Fresh from the Iowa caucuses where he came second to Texas Senator Ted Cruz in the contest for the Republican Party's nomination, Mr Trump is leading the polls in New Hampshire and is confident of a win in the Granite State.

As supporters streamed into his rally at Plymouth State University, they were greeted with the usual array of merchandise, including an "ISIS Make My Day" T-shirt design.

Unlike rallies and meetings for other candidates, security at Trump events is heavy-handed and intrusive; bags are emptied out and searched, everyone has to go through airport-style metal detectors, and security detail members lurk among the crowd looking out for dissenters or hecklers. 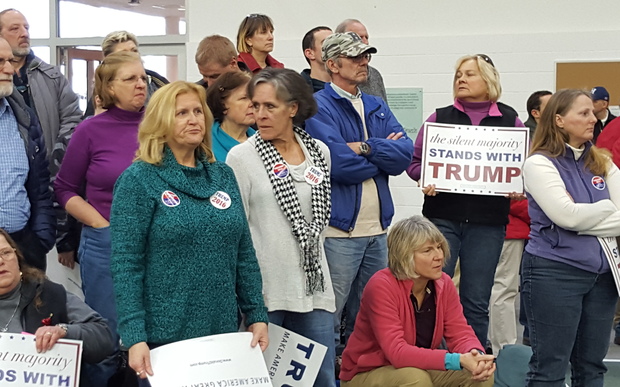 The crowd of a couple of thousand people waited expectantly to the thumping tones of the Rolling Stones, the Beatles, Elton John and then, to switch things up - Pavarotti's 'Nessun Dorma'.

The lights dimmed, the audience went nuts and suddenly there he was, launching immediately into a diatribe about education, military funding and how, among all of the candidates, he was self-funded and beholden to no-one.

"Everyone else is taking money, I call them the bloodsuckers."

Then Mr Trump was off on another tack, asking the crowd if they liked his comments - during a television debate the previous night - that he would not only condone waterboarding terrorist suspects but also more brutal techniques if that was needed to elicit information.

"Some people thought it was controversial," he told the crowd.

"We're living in medieval times... Even in the Wild West, you get shot, they shoot you but they don't cut your head off.

Security personnel closed in on one young guy who yelled out, questioning the use of waterboarding on innocent people, but held back waiting to see if he would cause any further disturbances. 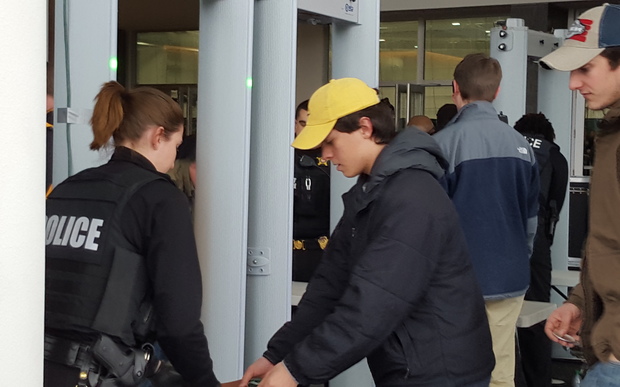 Voters pass through the security check-in ahead of the rally. Photo: RNZ / Jane Patterson

The crowd was, generally, a mix of die-hard supporters, those there for the novelty value and some of the large number of undecided voters in New Hampshire.

One woman said she just wanted to see and hear all of the candidates in person.

"Well, there's a big election coming up, so we'd like to get out and listen to everybody, and today's Trump's turn."

She said Mr Trump had struck a chord with the American public, but she remained undecided. 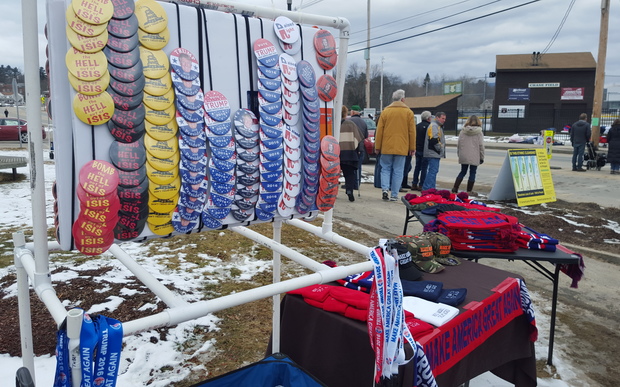 Merchandise for sale outside the rally: "Bomb the Hell out of ISIS", "Raised Right" and "Hillary for Prison". Photo: RNZ / Jane Patterson

Another voter - with her young daughter in tow - was firmly behind Mr Trump.

"I really like his message, I'm just here to see him in person, I'm going to vote for him, I know that," she said.

"I like how he is not politically correct, I like how he says it like it is, how he says the truth and I like his strength and what he's going to do to change this country and make it great again."

One man, who came to the rally with his wife, said Mr Trump was very entertaining and had the potential to be a good president.

"And he's addressing problems that are pertinent to the country right now; a little more forthright than a lot of the others but very interesting."

The Trump rally also brought out several supporters of Bernie Sanders, who could be seen dotted along the main street of Plymouth brandishing "Honk for Bernie" placards.

Senator Sanders, like Mr Trump, also had a solid lead in the polls for the state's primary, in his case over Democratic rival Hillary Clinton.

That was reflected by a steady stream of tooting from fellow supporters - interspersed by the occasional insult, including one man who stopped his car in the middle of the street to chant out his window "down with socialism, socialism out". 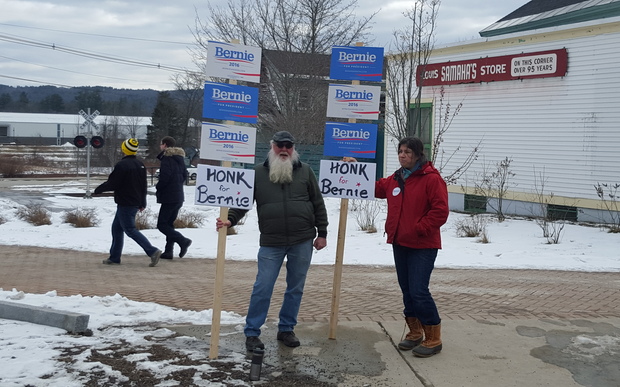 Stephen Woodbury and Kristin Walsh, who were among those backing Mr Sanders, said they wanted to present a different message to those out and about in Plymouth on the day of the rally.

Mr Woodbury said he was out on the corner to support a candidate who represented the interests of all Americans, not just the wealthy.

"Well we've been having some fun with that and part of being out here, in my view, is to be here because that's happening," he said.

"Part of the idea of this is it's a democracy and everybody is entitled to have their own belief system and to show support for it."

The polls open in booths across New Hampshire at 7am on 9 February, and will close 12 hours later.