The 2016 race for the White House officially kicked off in Iowa yesterday. Jane Patterson was in Des Moines for the rowdy rhetoric and free cookies as the votes were counted. 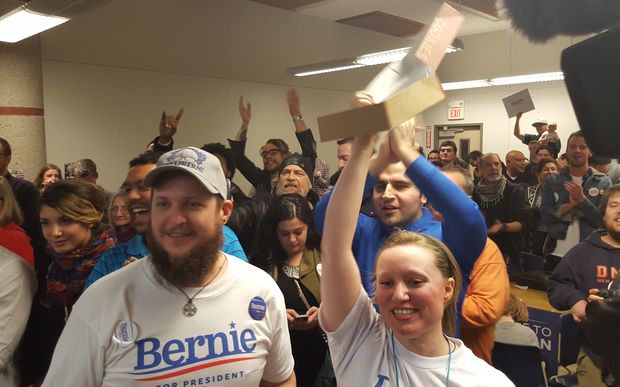 Baked goods were used in an attempt to bribe undecided voters, and was just one of the strategies deployed by political party supporters to lure people into their corner.

The inaugural votes of the 2016 race for the United States presidency were cast in Iowa yesterday, with former secretary of state Hillary Clinton ending the night 0.4 percent ahead of rival Bernie Sanders in the Democratic vote.

At the Democratic caucus with the free cookies, it was literally a matter of people physically moving from one place in the room to another to show their support, as voters defied a predicted snowstorm to turn out in droves for the state's 2016 caucuses.

In the Democrats' caucuses, the total number of people in the room is counted - which is necessary, because each candidate needs to have at least 15 percent of those present in their corner to become "viable" and continue in the process.

At the start of the caucus for the 49th precinct in the State Historical Building in downtown Des Moines, the crowd was evenly split between Sanders and Clinton. 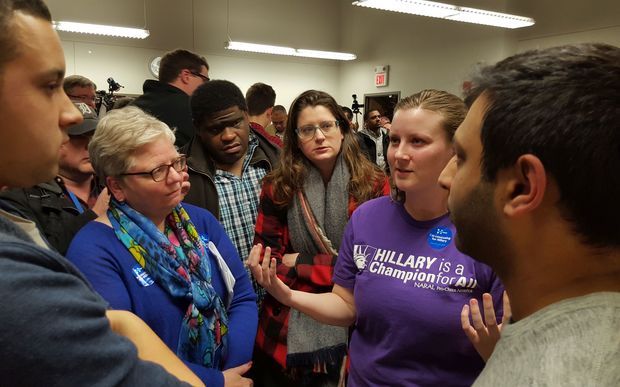 The Clinton supporters sat in rows of chairs under the Clinton banner, stony-faced at taunts from the rowdy Sanders group at the back of the room, who would regularly break out into the catch-cry "feel the bern".

The third Democratic candidate, Martin O'Malley, had a small but enthusiastic group, but not enough for viability. So they huddled together as the rest of the room targeted them in their efforts to convince them to join their candidates.

The two larger groups were given a chance to make a pitch - for the Clinton camp, a no-nonsense woman launched into the candidate's defence.

"She's been committed to the Democratic Party her entire life... 68 damn years!"

The Sanders representative was offered a chair so she could talk to the whole crowd: "What are you most interested in? Because with that we can answer any questions better than she can or any other supporters can." 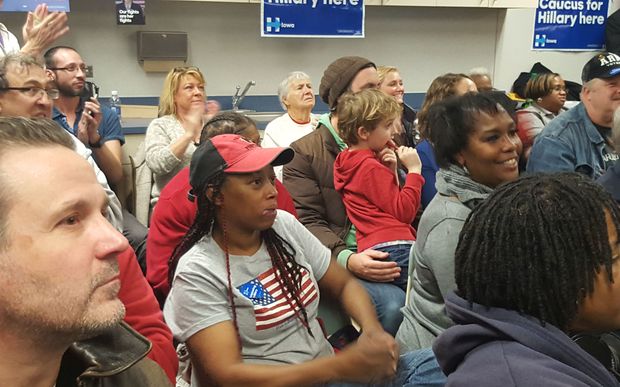 Hillary Clinton supporters watch on as pitches are made to undecided voters in the Democratic caucus in Des Moines Photo: RNZ / Jane Patterson

During the addresses, there were several challenges and snide interjections, despite the fact they all belonged to the same party - demonstrating the competitive nature of this primaries contest, and just how much was at stake.

In the end, there was some back and forth on policy - earnest conversations, in the midst of dozens of cameras and microphones about the merits of each candidate.

One man was not bothered with that level of detail and decamped to the Sanders corner to grab a few cookies; the rest of the undecided divided themselves between the two candidates, delivering Sanders a one-vote victory - 84 to 83.

This was just the very start of the process; more than 1000 delegates will be selected in Iowa, but they still have to go through county, congressional and state levels before the number is whittled down to 44 - the number of delegates who will decide the final nomination. 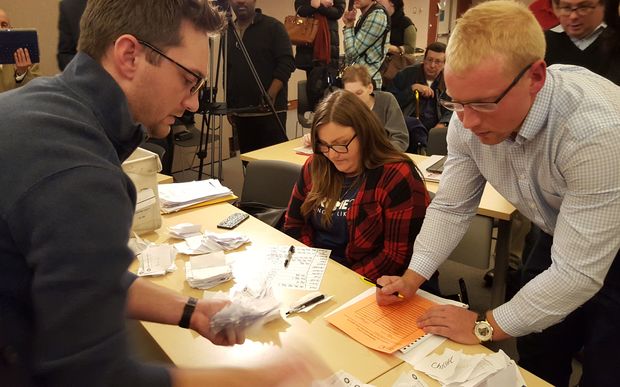 Upstairs in the State Historical Building, the Republican caucus was a much more demure affair.

Voters gathered to hear the pitches from candidate representatives, then wrote their preferences on pieces of paper, which were then tallied manually at each precinct.

After the caucus meeting, one supporter said his decision was last-minute.

"I just think he's the man who's going to win; my biggest desire is to find the Republican that can beat the Democrats in the fall." 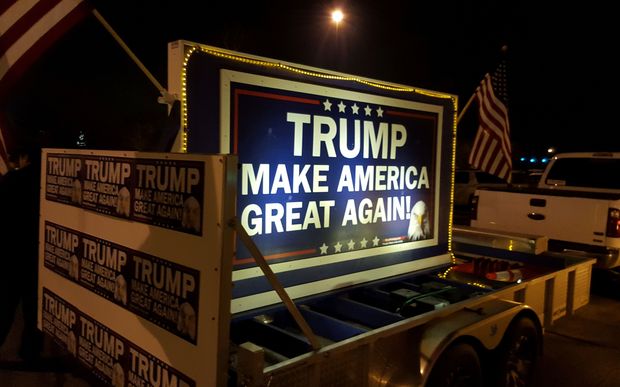 The sight greeting Trump supporters as they arrived at the post-caucus party at a hotel in West Des Moines. Photo: RNZ / Jane Patterson

A Trump supporter leaving a post-caucus party at a Des Moines hotel was thinking along the same lines.

"He's the one who will win in the general election against any of the other Republicans because Cruz is too far to the right."

Mr Cruz's precinct captain at the caucus in downtown Des Moines, Yvette Lazano, said they were confident he would continue to gain momentum in the states to come, especially in home base Texas. 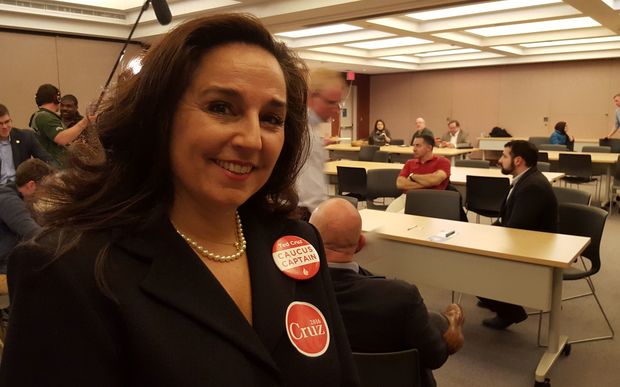 The ink was barely dry on the Iowa caucus when the candidates who remained in the race had boarded their planes to start wooing the voters of New Hampshire, where the next primary will be held on 9 February.

Jane Patterson's trip to the United States was funded by a grant from the US Department of State.