It's probably the biggest smile you've seen - one to light up the heavens. 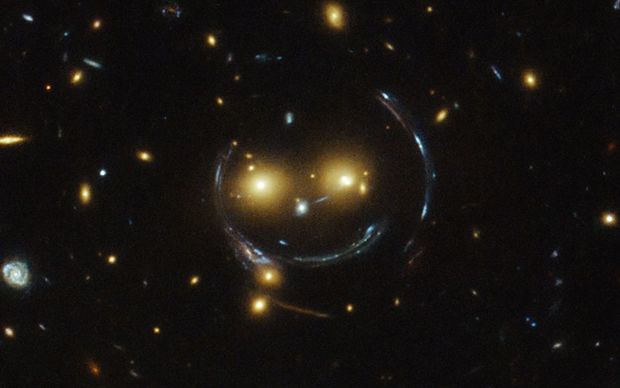 Nasa recently released the above image snapped by the Hubble Space Telescope and in it the charmingly named galaxy cluster, SDSS J1038+4849, appears to be smiling.

"You can make out its two orange eyes and white button nose. In the case of this 'happy face', the two eyes are very bright galaxies and the misleading smile lines are actually arcs caused by an effect known as strong gravitational lensing," Nasa said.

"Galaxy clusters are the most massive structures in the universe and exert such a powerful gravitational pull that they warp the space-time around them and act as cosmic lenses which can magnify, distort and bend the light behind them.

"This phenomenon, crucial to many of Hubble's discoveries, can be explained by Einstein's theory of general relativity."

Are you following this?

Nasa said in this special case of gravitational lensing, a ring - known as an "Einstein Ring" was introduced from the bending of light.

And for it to happen; the source, lens and observer had to be aligned.