American space agency NASA's mission to Pluto is about to get under way in earnest. 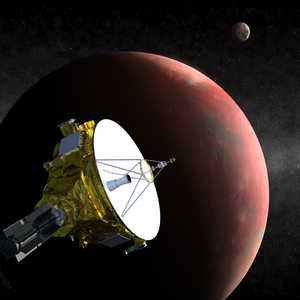 An artist's concept of the New Horizons spacecraft as it approaches Pluto and its three moons. Photo: AFP / NASA / John Hopkins University

Its New Horizons probe will take the first of a set of critical pictures on approach to the icy world on Sunday.

At a separation still of 200 million km, Pluto will be hardly discernable in these images - just a speck of light against the stars.

But the mission team said this view was needed to help line up the spacecraft correctly for its fly-by on 14 July.

"Optical navigation is one of those techniques where we image Pluto repetitively on approach to determine the position of the spacecraft relative to Pluto," explained Mark Holdridge, from the Johns Hopkins University's Applied Physics Laboratory in Baltimore.

"We then perform a number of correction manoeuvres to realign our trajectory with the reference trajectory, thus ensuring we hit our aim point to travel through the Pluto system."

Any initial correction is likely to be made in March.

When New Horizons arrives at Pluto it will be moving so fast - at almost 14km/s - that going into orbit around the distant world is impossible; it must barrel straight through instead.

One complication is that the seven different instruments aboard the spacecraft need to work at different distances to get their data, and so the team has constructed a very elaborate observation schedule for them all.

But what this means is that very precise timing will be required to make sure the flyby runs smoothly.

Mission planners want the exact timings nailed to within 100 seconds. New Horizons will know then where and when to point the instruments.

The Pluto mission is being billed as the last great encounter in planetary exploration.

For people who grew up with the idea that there were "nine planets", this is the moment they get to complete the set.

Robotic probes have been to all the others, even the distant Uranus and Neptune. Pluto is the last of the "classical nine" to receive a visit.

Of course, this 2,300km-wide ice-covered rock was demoted in 2006 to the status of mere "dwarf planet", but scientists say that should not dull our enthusiasm.

The dwarfs are the most numerous planetary class in the Solar System, and NASA's New Horizons probe is one of the first opportunities to study an example up close.

The first set of navigation pictures may not be anything special, but by May, the probe will be returning views of Pluto that better anything from Hubble. Come July, the view should be spectacular, said Andy Cheng, the principal investigator on the probe's main camera, which is called LORRI.

"The most recent surprise we had was with the Rosetta mission. Hubble had made a 'shape model' of Comet 67P but no-one expected it to look like a rubber duckie," he told BBC News. "I am more than hopeful that we will get similar surprises with New Horizons - it's what we should expect."

Those surprises could include yet more moons (five are currently known) and possibly even rings like those seen around some of the bigger planets.

Pluto is currently 5bn km from Earth. It has taken New Horizons more than nine years to get to the dwarf's doorstep.

Once the flyby is complete, the probe will be targeted at an even more distant object in the Kuiper Belt - the name given to the icy domain beyond the main planets. Scientists think this region of space may contain many thousands of Pluto-like objects, some of which may even rival Mars and Earth in size.

The first optical navigation images should be back on Earth by Tuesday at the latest. They will show Pluto with its largest moon, Charon.