Simon Bridges has identified Jami-Lee Ross as the National Party leaker after the party's inquiry into the leak, but the MP is denying he was responsible.

In a stand-up this afternoon, National Party leader Simon Bridges said the inquiry report identified Mr Ross as the most likely source of the leak, and he accepted that finding.

"The report states that the evidence identify points to Jami-Lee Ross as being the person who sent the anonymous text message. I am releasing that report today.

"It is his [John Billington QC's] opinion that on the balance of probabilities the evidence establishes that Jami-Lee Ross was the person who leaked the expenses and the sender of the text message."

Despite the revelations he said he was confident about his caucus and his leadership of the party.

He said these matters were only the result of a single member of parliament and will be dealt with in caucus tomorrow.

"This isn't about me, this is about getting 56 members of parliament, these matters are for caucus to consider," he said.

"The caucus will be asked to consider all relevant matters including his membership of caucus, finally you will recall, Jami-Lee took leave from Parliament given personal health issues, this action is completely separate. I didn't know what the investigation report would contain when the matters were addressed in recent weeks." 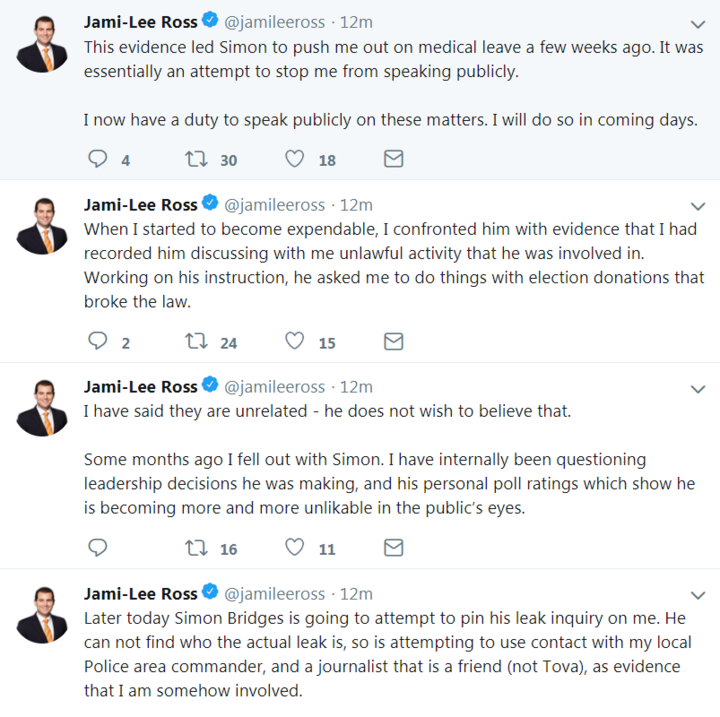 "Look I think he would say those things, given the situation that he is in, I am not surprised frankly by the false comments that he's making.

"Certainly I reject any allegation of the sort in terms of unlawful activity, it's simply not true."

The investigation, which was carried out by PwC, was looking into the leak of Mr Bridges' travel expenses in August.

In August, RNZ revealed a person claiming to be a National MP had sent a text message to Mr Bridges and the speaker, Trevor Mallard, pleading for the initial inquiry to be stopped for the sake of their mental health.

That led to Mr Mallard pulling the plug on that inquiry saying it was unlikely the text had been sent from anyone outside the National Party.

The National Party then decided to go ahead with its own investigation into the matter.

But as the staff's employer, Parliamentary Services refused to give permission on their behalf.

KPMG, who carried it out, concluded there was no evidence that Mr Mallard or any Parliamentary Service finance staff were responsible for the leak.

Who is Jami-Lee Ross?

The National Party MP first entered Parliament in March 2011 as the MP for Botany.

He was just 25-years-old, becoming the youngest Member of Parliament at that time.

Prior to stepping down for "personal health issues" a fortnight ago, Mr Ross held the Opposition spokesperson role for Transport and Infrastructure.

Under the previous National government, Mr Ross was the senior whip - responsible for keeping MPs in line.

Prior to his election to Parliament, Mr Ross served the Manukau City Council in 2004 at age 18 and then for the Auckland Council on the Howick local board after the councils were amalgamated.

Mr Ross was formerly aligned with Judith Collins but ahead of the last National Party leadership he was doing the numbers for Mr Bridges and backed him for the leadership.

He was rewarded with a promotion to the front bench.

Mr Ross is married to Lucy Schwaner, who is also a former local body politician. They have two young children together.

She was elected to the Howick local board before quitting just weeks later - saying she did not have faith in the board chair. She'd lost her bid for the job five votes to four.