The unemployment rate for Māori has dropped significantly in the three months to June, falling to 6.7 percent from 8.7 percent last quarter.

Unemployment across the entire population fell from 4.2 percent to 4 percent.

Stats NZ labour market manager Andrew Neal said while the drop in unemployment among Māori was indeed significant, it was important to compare that with a rise in the number of Māori not in the labour force.

"While the number of Māori unemployment has fallen by almost 8000 over the quarter, the thing to look at in conjunction with that is the increase of about 14,500 Māori who are not in the labour force.

"Generally they are people who are retired or students, but also those who are not working and could like a job but are not actively trying to find one or are not currently available to find one."

He said to be considered unemployed, a person needed to actively be looking for work which many could not do during the lockdown.

"The lockdown means there are differences in people being available and actively seeking work so that's the key point to keep in mind when looking at these figures."

The rate of employment among Māori also dropped from 63.3 percent to 62.3 percent.

The lowest estimate for unemployment among Māori Stats NZ has ever published is 6.7 percent, however sampling errors mean it may not actually be the correct number. 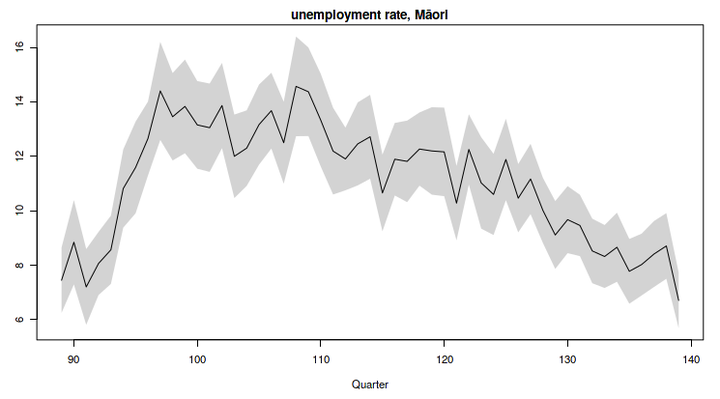 Māori unemployment figures during the Covid-19 lockdown as seen in the three months to June 2020. Photo: Supplied / Stats NZ