Warning bells are being sounded about giving aspiring business people access to their KiwiSaver funds if they find themselves out of work. 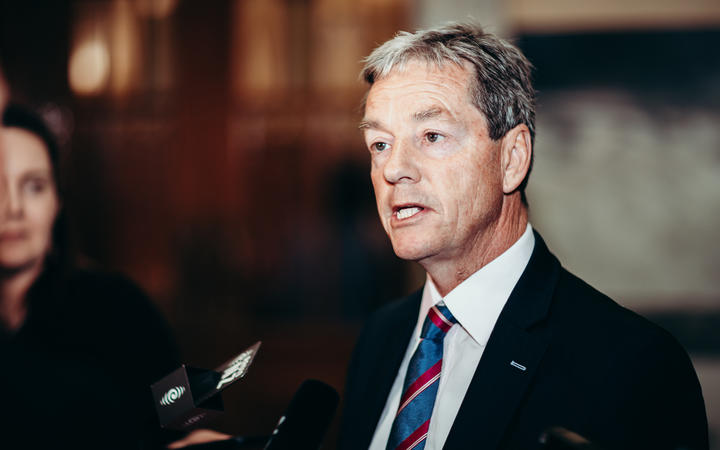 National's offering a cash package of up to $30,000. The catch: most of it would come from their own retirement savings.

Leader Judith Collins unveiled the BusinessStart scheme to help offset the economic damage from Covid-19, with tens of thousands of people heading for the unemployment queue.

Standing beside her, National's small business spokesperson Andrew Bayly struggled to get the details right.

Firstly he said the funding would come out of the $500 million set aside for their JobStart package. However, that's incorrect, with a party spokesperson later confirming BusinessStart would cost an additional $100m.

To encourage people to rebuild their retirement savings, KiwiSaver contributions would be tax free until people had repaid the amount they took out.

When asked why taxpayers should have to subsidise this, potentially, for years to come, Bayly denied there was any cost to the taxpayer - "but it's their money".

However, he then went on to outline the policy, under which there is a tax-free element and therefore a subsidy from taxpayers.

"If you're putting money into your KiwiSaver account that comes out of your after-tax savings, and so already those people have paid tax.

More broadly, Collins argued people should have access to their own funds in times of financial stress, and in this case to pursue a new business venture.

Finance Minister Grant Robertson said it was a "risky proposition", partly because of the high rate of failure for new businesses and that KiwiSaver's supposed to be there for peoples' retirement.

"I heard the leader of the Opposition describe it as being put aside for a rainy day. For most New Zealanders that is not correct, it is actually a key for their security in retirement," he told reporters.

While there is support for employees and small businesses, he admits there is no way for unemployed people to access cash to get them into business under the current government.

"No there's not, but taking on the idea of starting a business is something I know everyone would be very serious about, and I think it's really important we don't put people themselves at risk."

Max Whitehead, from the advocacy group Small Business Voice, said the business support and tax incentives would be hugely helpful. But he too was worried about giving people access to their retirement funds, without the rigour of having to stack up a business case in the same way you'd do through by working with a bank, because if "someone invests in a business that's not feasible, it's going to go under".

"And they would lose their life savings... there's a high risk and it's very helpful to have a bank oversee the loan because they're investing with you."

Collins pushed back on the suggestion it's a risky time for people to embark on a new business venture, saying "many people do" and they can start by cutting basic costs: "When you start your own business you often decide you don't need all the bells and whistles, you can be more mobile."

She used the example of someone who'd been working as plumber and gets laid off, being able to keep working without any overheads except covering their own costs.

"We should not give up on people just because they've been made redundant - we should be looking to say to people, if you've got the skills, you've got the entrepreneurial spirit, if you want to take on a risk yourself, we want to back you to do that."

Anyone laid off before 1 March would not be eligible, but Collins said they had to draw the line somewhere, and the greatest impact on peoples' job was through the period of the lockdown.

With 200,000 people unemployed on the benefit and a further 360,000 on "wage subsidy jobs", Collins said there would be no shortage of people who could take advantage of the scheme.

For those made redundant, under National's plan people would be given "the entire taxed portion of their redundancy as a tax credit with the IRD, which can be used to pay GST or other tax obligations created by the business".

Robertson said the government is looking at that, but there are some "complexities" around it and so remains a work in progress.

Under the policy there are also changes to provisional tax and asset write off rules.