New Zealand's 2020 general election could be life-changing, with two referendum questions for voters to answer, on top of the usual two ticks for parties and electorate MPs.

The Electoral Commission has sent out information on the referendum questions about end of life choice and the legalisation of cannabis, but how many people have read up on the issues?

More than three million New Zealanders are enrolled to vote, with thousands of those first-time voters still at secondary school.

RNZ's Checkpoint visited Auckland Grammar School in the Epsom electorate - the seat of ACT leader and End of Life Bill author David Seymour - to see if they knew what the election is all about.

Year 13 students at the school who spoke to Checkpoint were not warned about the media visit. Nonetheless their knowledge of the end of life choice and cannabis referendums were comprehensive and considered.

One student with detailed knowledge had read the Electoral Commission information that was sent out. How many people his age would do that?

"Not enough. I'm kind of worried about that."

"I'm not a huge fan of cannabis, I think New Zealand has got a bit of a problem already with alcohol. I understand the reasons why people might want to legalise marijuana – trying to crack down on illegal supplies and so on, so forth – but I think it's just adding to the problem we've already got here," one student told Checkpoint.

The topic of euthanasia was "a tricky issue," he said.

"Obviously we don't want people to be suffering but that being sad there are some important ethical questions to be asking.

"For example, terminal illness, you've got about six months of life left… these lines that are being drawn – unbearable suffering or no possibility of improvement – you need to also be asking the important ethical questions: Who is drawing these lines? Are these the only lines we can draw?

"It is a grey area obviously because suffering by its very nature is not an absolute." 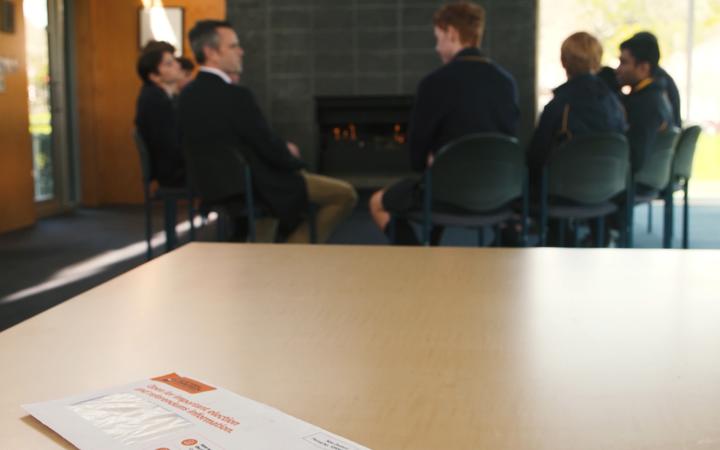 "If I were to vote tomorrow I'd probably vote for [legalisation of recreational cannabis]," another classmate said. "I just think if it is controlled and policed reasonably strictly then it does take the power out of the black market."

Down the road from Auckland Grammar on Newmarket's Broadway, the general public's awareness of the two referendums was mixed.

"I do think it's probably important for medicinal use. There seems to be a lot of evidence," one said.

But the referendum question on marijuana is about whether it should be legalised for recreational use.

"I don't really follow politics, but I know who I'm going to vote [for]," another said.

"Medicinal marijuana I agree with because it will help people with pain and things like that but the normal smoking of marijuana – I don't believe in smoking anyway," another member of the public said.

The Auckland Grammar students' advice for the public? Read the information at the government's official referendum information webpage.

Here are the two referendum questions:

Do you support the End of Life Choice Act 2019 coming into force?

You can choose 1 of these 2 answers:

Do you support the proposed Cannabis Legalisation and Control Bill?

You can choose 1 of these 2 answers:

You can enrol to vote right up to and including the day of the election, September 19.