The government was advised the US was considering an air strike against Syria a "couple of hours" before it happened, Prime Minister Bill English says. 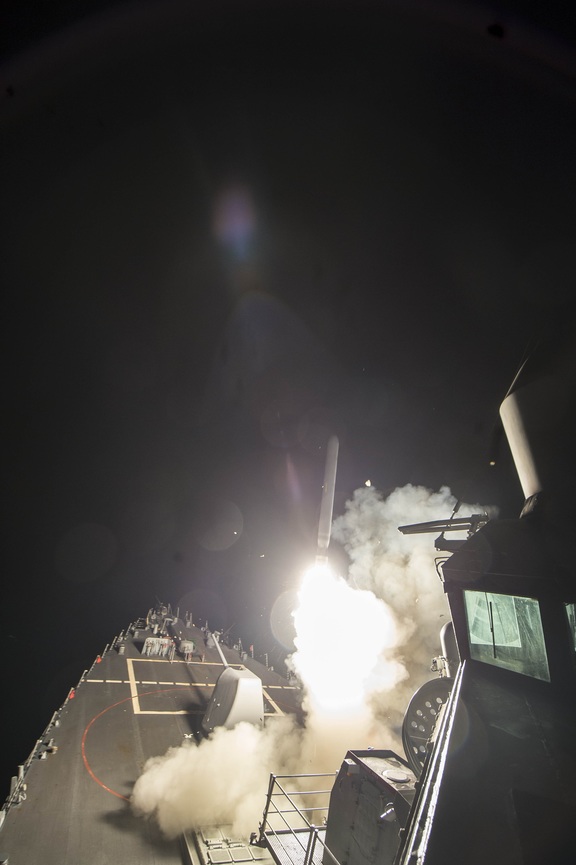 A US Navy image of the missile strike Photo: Supplied / US Navy

On President Donald Trump's orders, the US took its first direct military action against Syria today, firing 59 Tomahawk missiles at an air base in the west of the country.

Mr Trump said the attack, from two US warships in the Mediterranean, was in direct retaliation for this week's deadly chemical attack on civilians, which western powers blamed on the regime of Syria's president, Bashar al-Assad.

Mr English told Checkpoint with John Campbell the UN Security Council was New Zealand's preferred body to sort out the problems, but it had been unable to act "at all on Syria".

"We've seen the atrocities with the use of chemical weapons ... We support action that is proportionate to the requirement to stop further atrocities."

The US actions looked to be proportionate at this point, Mr English said.

"Well, on the face of it, it looks to be so, so far. It's concerning the action has to be taken because there's real tensions in Syria."

Earlier, in a statement, Foreign Minister Murray McCully said the US had taken the unilateral action to try to prevent further chemical weapon attacks.

He said it was becoming clear the Syrian government carried out chemical strikes and, without an adequate reponse from the Security Council, the New Zealand government understood US action.

The Green Party called the US attack hasty and a threat to global security.

Greens global affairs spokesperson Kennedy Graham said the Greens expected cooler heads from global leaders and no wrong had ever been righted, and no child protected, by launching missiles.

Labour leader Andrew Little said some response had been needed to the chemical attack, which has reportedly left more than 80 people dead - including many children.

He said any unilateral action needed to comply with UN resolutions.

"New Zealand must continue to support international efforts to find a lasting peace. Until that happens the humanitarian crisis will only get worse."

Early reports indicated damage to the Shayrat Air Base was extensive. At least four Syrian soldiers had been killed, the Syrian Observatory for Human Rights said.

A US defence official called the strike a one-off.