US President Donald Trump has hinted at the possibility of military retaliation for this week's chemical gas attack in Syria. 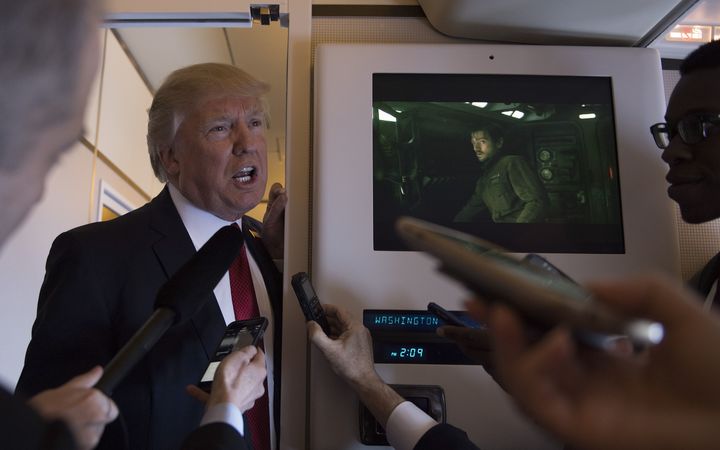 Donald Trump speaks to reporters on Airforce One. Photo: AFP

The attack in the rebel-held north killed more than 80 people].

Post mortem results overnight have confirmed the use of toxic weapons in the attack.

The Pentagon and the White House are in detailed discussions on military options to respond to the attack which Washington has blamed on the Syrian government, a US official said.

The options could include grounding aircraft used by Syrian President Bashar al-Assad's forces, the official added, speaking on condition of anonymity.

Such options would also include use of cruise missiles -- allowing the United States to strike targets without putting piloted aircraft in the skies above Syria.

It is not known how likely military action might be.

The official said US Defense Secretary Jim Mattis and White House national security adviser H R McMaster had already been in talks on the matter.

General Mattis is to meet with Mr Trump at his Mar-a-Lago retreat in Florida later today.

Trump said yesterday that "something should happen" with Mr Assad after the attack, but stopped short of saying he should leave office.

"I think what Assad did is terrible," Trump told reporters traveling with him on Air Force One.

"I think what happened in Syria is a disgrace to humanity and he's there, and I guess he's running things, so something should happen."

Trump said on Wednesday that the attack, which killed at least 70 people, many of them children, "crosses many, many lines", an allusion to his predecessor Barack Obama's threat to topple Assad with air strikes if he used such weapons.

His accusations against Assad put him directly at odds with Moscow, the Syrian president's principal backer.