As the Milford Sound track partially reopens, the damage it sustained highlights the need to curb climate change and prepare for its impacts, Conservation Minister Eugenie Sage says.

The track is reopening next week after heavy storm damage caused rockfalls and slips that left trampers dead or stranded and heavily damaged a hut.

Sage said she was proud of the efforts of Department of Conservation (DOC) staff to get the track open, and they were hoping by the end of next week, to have been able to reopen about 60 of the more than 70 tracks that were closed.

She said they knew how important the tracks were to tourism in the area, and while the opening would mean the return of some revenue to the department, the real costs were in the repairs required and the diversion of staff from important conservation work.

"It is also the major costs of these intense storm events: the damage to nature, the big slips that occurred and also the damage to the tracks, the huts, the toilets, the bridges and just the ongoing additional costs then of repair, the fact that staff are diverted from other work to focus on assessing the track so that they're safe, and then putting the resources into repair."

She said she did not have a repair costs estimate yet, but the damage from the storms showed why the government needed to focus on protecting the climate.

"The key is actually protecting the climate, but yes these climate events are having a significant effect on the department and tracks and huts. 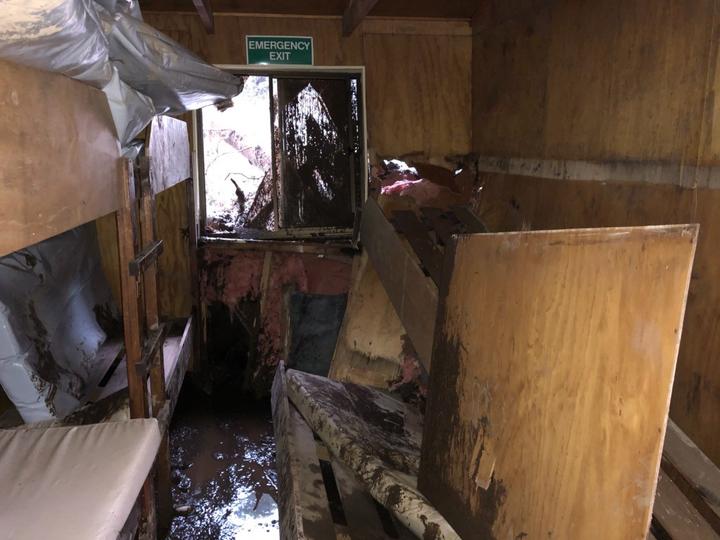 A land slip in torrential rain smashed through the Howden hut on the Routeburn track. Photo: Supplied / Brett Studholme

"[That is] why this government is doing so much to get our emissions down, because these extreme weather evens that we saw in Southland, Otago, do major damage because they're more intense."

She said it the department was looking at preparing for such weather events for other tracks around the country.

"Like Abel Tasman, some of the campsites have to be moved further inland because of more intense wave action that comes further up the beach, so across the conservation estate looking at how to make infrastructure more resilient.

"Looking at things like bridges ... do they need to be higher, do the abutments need to be strengthened ... it's those sorts of quite detailed considerations on a track-by-track basis."

There was also other conservation work that was being carried out to safeguard against climate change.

"There's a lot of work in the department to look at what are the impacts of a changing climate on biodiversity with warming temperatures, particularly in alpine areas, it means species have to move further up slope." 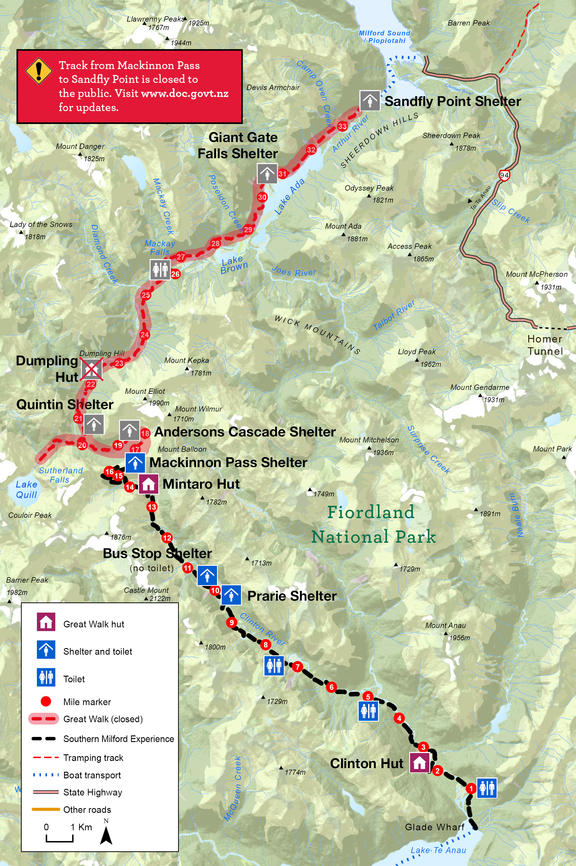 Sage said the Milford track would be open as a three-day, two-night walk from Lake Te Anau along the Clinton River to the Clinton hut, to the Mintaro hut at the river's source, Lake Mintaro, and on to MacKinnon Pass, then back again.

"The other side going down to Sandfly Point and Piopiotahi / Milford Sound - there's been extensive damage there with one of the bridges out, some scarring of the track. So, that's not open but that experience ... from Clinton to Mintaro and up to the pass is a major part of the track and that's been reopened," she said.

About 5000 to 6000 people had their track bookings cancelled after the floods.

She said people whose bookings to walk the track had been cancelled were being offered priority on the shorter experience, with staff at Te Anau visitor centre facing a big task organising the logistics.

They would be refunded for one hut night if they chose to walk the new route, or could get a full refund by contacting DOC if they wanted to opt out.

The next focus for DOC staff and volunteers would be on partially reopening the Routeburn track, she said.

"On ensuring that there is an opportunity to walk - probably from the Glenorchy end - and experience part of the Routeburn track there.

"There are a number of slips on the track, the Howden hut is out, one of the bridges is out, so the department is looking to focus on what can be enabled there ... there's a big slip just from the start of the track to the divide."