The All Blacks will play England for the first time since 2014 as part of next year's autumn internationals at Twickenham. 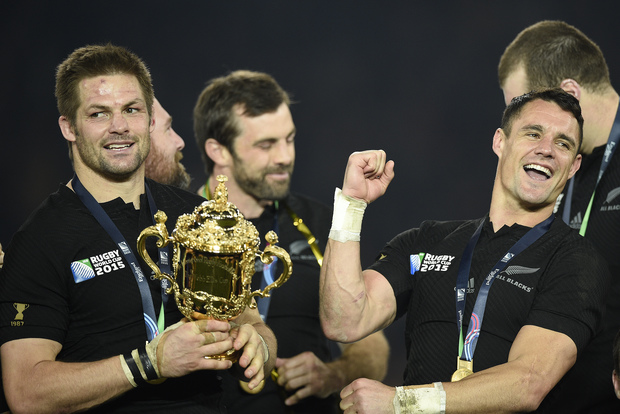 Richie McCaw holds the Webb Ellis Cup next to fly half Dan Carter after winning the final match of the 2015 Rugby World Cup. Photo: AFP

The Rugby Football Union in England confirmed the home schedule for next year.

At the two sides last meeting in 2014, the All Blacks won 24-21 against England at Twickenham.

We look forward to welcoming all four teams to Twickenham Stadium next year...#CarryThemHome pic.twitter.com/ACS0nATFXF

England coach Eddie Jones' side host South Africa in the first match of the series on 3 November, before the All Blacks' match on 10 November.

They also face Japan on 17 November and Australia on 24 November.

England lost four times to the All Blacks in 2014.

"We want to win that series 4-0 and we will need to play extremely well to beat four very good teams over a four-week period," said Jones.

"The series will give us a really good indicator of where we are as a squad, a year out from the Rugby World Cup."

"Over the next year we need to continue to develop a bulletproof side, that can find ways to win in matches, and we will have to work hard and be smart in what we do to bridge the gap between us and the All Blacks.

"Our ambition is to be the number one team in the world going into the 2019 Rugby World Cup in Japan."

The All Blacks play a resurgent South Africa in the Rugby Championship encounter in Albany on Saturday.