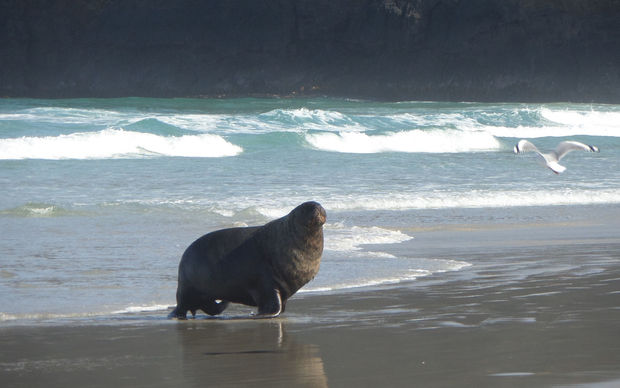 The breeding ground at Port Pegasus on Stewart Island needs to have at least 35 pups born each year for five years to mark it as an official colony, and 2018 is in line to be the fifth successful year.

Department of Conservation Stewart Island ranger Kevin Carter said he was already planning how to celebrate the occasion.

Mr Carter visited the breeding ground to count this year's record 40 pups, and found sea lions scattered on the beach, up hills and even venturing inland.

"You might be a few hundred metres inland and all of a sudden you come across a [male] sea lion."

There are only about 10,000 of the nationally critical species left, and their main breeding colonies are in the sub-Antarctic Auckland Islands.

"They're now the rarest sea lion in the world," he said.

"If we want them to recover from that sort of status then we need them to establish other breeding colonies.

"If you've got them all breeding in one location and you get some sort of natural disaster or human-caused disaster there, you could lose the whole lot in one go."

A recent report from the Ministry for Primary Industries showed two New Zealand sea lions were killed in the week to Sunday 14 May, and another one was killed earlier this year - all by squid trawlers.

Earlier this month the government announced it was investing $2.8 million over four years for a sea lion threat management plan.

A sea lion was shot in the Catlins last month, and two were shot on Stewart Island in the past five years.

DOC science advisor Laura Boren said the department would need to educate the public about the importance of protecting the mammal.

"They'll be coming into contact with people more and more so we really need to raise awareness about the fact that this is a really good, positive thing, but also how to share space with sea lions as they come back."

Port Pegasus is in a remote, south-east corner of the island, visited by hunters and recreational fishers.

It is an ideal spot for a breeding colony now, but has been earmarked as an aquaculture development site under Southland's new regional strategy.

"Forest and Bird is likely to be totally opposed to having new fish farms in an area which is surrounded by national park."

He said a full assessment of sea lion interaction would be done to understand implications for operating marine farms in the area.