Habicht has made a career from directing charming and offbeat movies such as Kaikohe Demolition, Wooden Head, Rubbings from a Live Man, Land of the Long White Cloud, Love Story and a documentary about the Brit-pop band Pulp called Pulp: Life, Death & Supermarkets.

During a stint directing advertisements for the Lotteries Commission, Habicht met James and Isey and they asked him to make a film as Isey approached her 100th birthday.

Isey and her son James live in Kawakawa and the movie was made in 2019, which was the year Isey turned 100.

The film counts down to the big day and the party.

Today is Isey's 102nd birthday and Habicht says the trip to Auckland for tonight's premier was a bit tiring for her.

"When she landed in Auckland, cause I don't think she's been on a plane for 50 years, she was a little bit jaded from the flight and she was going to me ... 'Oh let's just get it over with'

"She was a bit grumpy from the flight but then after a nap her eyes just lit up and she was so excited.

"I can't believe it, like 102, the last time she was at the Civic Theatre was during the Second World War and now she's back for her 102nd birthday ... she's incredible."

James & Isey arrive at The Civic for the world premiere of their film by Florian Habicht, with the screening following a powhiri. It’s Isey’s 102nd birthday. pic.twitter.com/9o1x7LnRYs

Habicht says the pair tracked him down at a time when he was having a tough time with his career and was making TV commercials.

He says an Instant Kiwi campaign that he was working on wanted "real people from all across the country" - not actors nor people who had appeared on TV before.

Habicht says they put the call out.

"I got this postcard from this guy called James from Kawakawa saying 'Hi I'm James I live with my 99-year-old mother Isey who's turning 100 in a month and we play Instant Scratch Kiwi and we would love to be in your ad and if you choose us my Mum promises to make you one of her world famous apple crumbles.'"

Habicht then told his team that the pair should be hired without going through the audition process - but was told they did need to audition.

James and his mother Isey are both shamans and it seemed that from the outset James may have had an ulterior motive for doing the ad.

"What had actually happened was James had asked the universe, he's a very spiritual being ... and he put it out that he wants someone to film his mother's 100th birthday party.

"So he put the message out there and also because he was trying to raise more money for this extravagant, huge party that he'd been planning for years, his little secret plan was to get this Instant Kiwi ad because there was a nice fee attached to it so he could pay for the remaining party costs."

Habicht says James & Isey has been his favourite film shoot to date.

"Often on film shoots there's all this pressure and you have to get all these shots in before the sun sets and there's a certain time thing and yeah it's pressure to make something."

But he says he did not tell anyone he was making James & Isey which removed expectations.

"Every day arriving at their house in the week before Isey's birthday, it was like doing things in Isey's time and I felt more like a wildlife David Attenborough cinematographer, just slowing down.

"The film really because we didn't have a budget, there was no funding, there was just Isey, James and myself and the film literally was made with love - like there was nothing else." 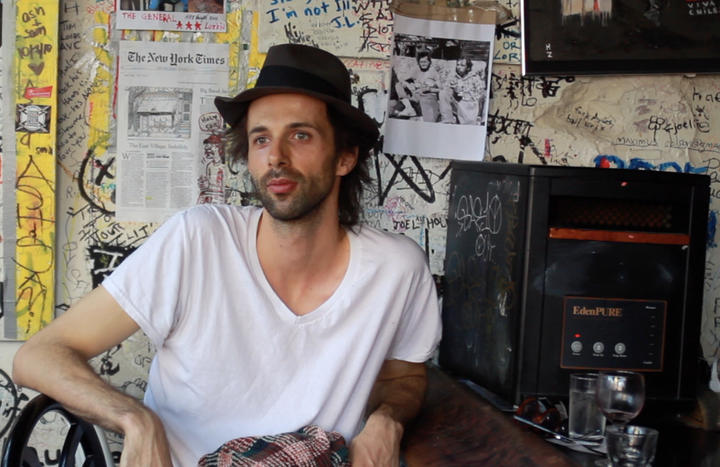 Habicht says it was amazing to witness the aroha between Isey and James and how they looked after each other.

He says it was great to get back to his roots in the North and experience the values of what life is all about.

"Every morning when I drove to set, to their house in Kawakawa, I got my coffee and then drove ... I just felt so happy.

"It was a really wonderful experience and when I was filming them, most of the time I was just thinking 'oh my god, no one could script this.'"

James had told Habicht that he and Isey wanted the film's premier to be held at the Civic Theatre in Auckland.

It was looking like it would have to be a "less than ideal" winter release since they were the only bookings available, Habicht says.

But he says staff from the film's distributor Madman kept checking the Civic's bookings.

"Luke from Madman kept trying and then strangely there was one date where all the pencil bookings and the main booking had just been cancelled and it had become free and it was the Saturday the 3rd of April, Easter and that happened to be Isey's 102nd birthday ... like what the? Which is so so so amazing.

"And that's upstairs the spirit world looking after us."

James & Isey will be released nationwide on 6 May.