It has been revealed an Auckland family infected with Covid-19 holidayed in Taupō and met up with a group of more than 10 people, despite Aucklanders being urged to take their alert level restrictions with them when travelling.

The cases are linked to a man who tested positive five days after completing managed isolation in Christchurch after flying in from India via Fiji on 26 August.

The man flew home to Auckland from Christchurch on 11 September. Two other people from that flight and a household contact of theirs have subsequently tested positive.

"This family made a trip down to Taupō about a week ago, Friday the 18th, and then returned to Auckland on the 20th," Director of Health Dr Ashley Bloomfield told Checkpoint.

"They were called on the Saturday evening of the 19th by our contact tracing team after they were identified as having been on that flight, the charter flight from Christchurch to Auckland."

After returning to Auckland on 20 September, the family went into self-isolation and got Covid-19 tests, he said.

"While they were in Taupō they met up with several other families who had travelled from various places around the country, and they did a number of activities with those families over the weekend.

"Those families have then gone back to their places of residence in Christchurch, Wellington, Hamilton, another Auckland family and Kawerau. 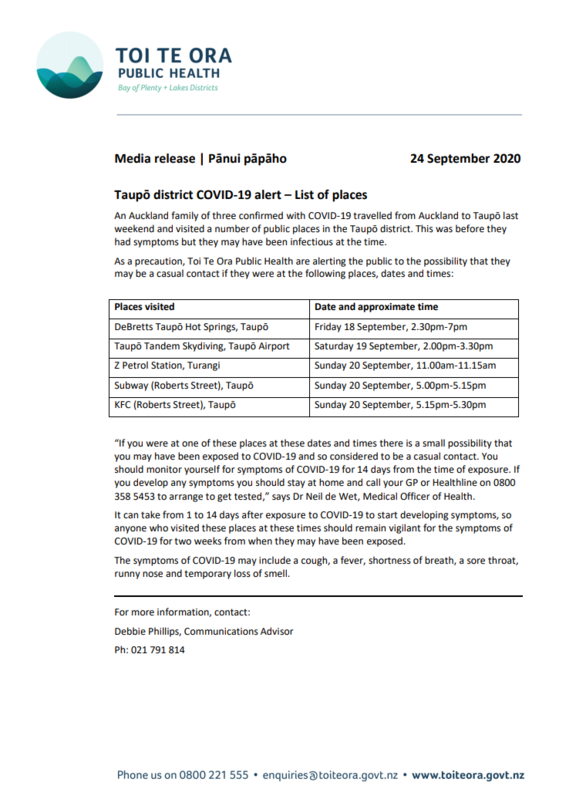 "They're all being followed up, each of those families have been followed up by the local public health unit. They've all been contacted yesterday, are in isolation and are being tested as well.

"There was a total of 18 people amongst the group they gathered with in Taupō, so yes, not ideal in this situation in that they did meet up with a group bigger than 10 which was the maximum gathering size for people in Auckland, although Aucklanders could travel outside of Auckland of course.

"But I would say, my sense is there wasn't any intent on their part and also they were very assiduous in using the contact tracer app so it's really helped us identify where they have been very quickly."

Dr Bloomfield said a total of 31 close contacts had been identified so far.

"Eighteen of those are from the trip to Taupō and other close contacts are from the people they had come in contact with while they were in Auckland, before they made their trip down to Taupō.

"Those who have spent more time with [the family], or they're identified close contacts, will spend the full 14 days [in isolation] even if they return a negative test. At the outset, they'll still be asked to self-isolate for 14 days and be retested towards the end of their period."

Dr Bloomfield said he was not entirely worried about those who had gathered with the family in Taupō and returned to cities like Christchurch and Wellington, because those people were identified quickly, isolated and were tested.

"Obviously we'll be wanting to get the test results back from them, which we'll expect later today and tomorrow morning.

"We're also testing contacts of contacts, if there are positive tests. A couple of these people live in flats with others. And those people have been asked to self-isolate until we get the test results from the person who was on the Taupō trip.

Dr Bloomfield said he did not think fear of Aucklanders was justified, but it was a good reminder that there was a good reason behind the Covid-19 alert level recommendations.

"Even as we go into the school holidays… a reminder to Aucklanders – great they will be travelling around the country, and it's good we're in a position they can do that, just to be mindful.

"The advice to anyone – and this is how we've got on top of this – late last week a fellow from the flight, even though he had been right through managed isolation and tested negative twice, he developed symptoms, self-isolated and got tested.

"So my plea is, for anyone around the country, if you do develop symptoms, do isolate, stay at home and get tested. That's how we will keep ahead of this virus."

Health officials are still looking at how the latest spread happened. "There was the original flight out of Delhi, though that would have meant a long incubation period. Whether something happened inside the managed isolation facility, we need to keep an open mind about that, and also on the charter flight.

"What I would say is that the person who was identified as the case on Saturday, and the two family members in this latest group who were on that same flight, they were in adjacent rows on the charter flight.

"So what we're really looking at is the whole genome sequencing will tell us who was infected first.

"And we should have that in the next day or two, so that will be really important in being able to put the pieces of this puzzle together."

Rugby: Will the All Blacks be home for Christmas?

"There's an ongoing active discussion between the two rugby unions, here and Australia. And I imagine that conversation will happen. I've spoken directly with Mark Robinson from NZ Rugby, and am continuing to provide my advice," Dr Bloomfield said.

"What I'm focused on in my advice, and as New Zealanders would expect, is the standard for assuring safety and maintaining public health here in New Zealand, and at the moment that includes 14 days in managed isolation for people coming into the country."

Dr Bloomfield did say he has been asked to look at the proposal that the All Blacks do some of their quarantine time in Australia, enabling them to get home earlier.

"We're developing some advice on that, and we'll keep in touch with the rugby union.

"We're always looking to see if we can make things work. And there's still a couple of months ahead of this, a lot of water to float under the bridge before those matches even start so let's just see what happens."