The latest three community cases of Covid-19 sat near a man already known to have the virus when they all travelled on a charter flight from Christchurch to Auckland. 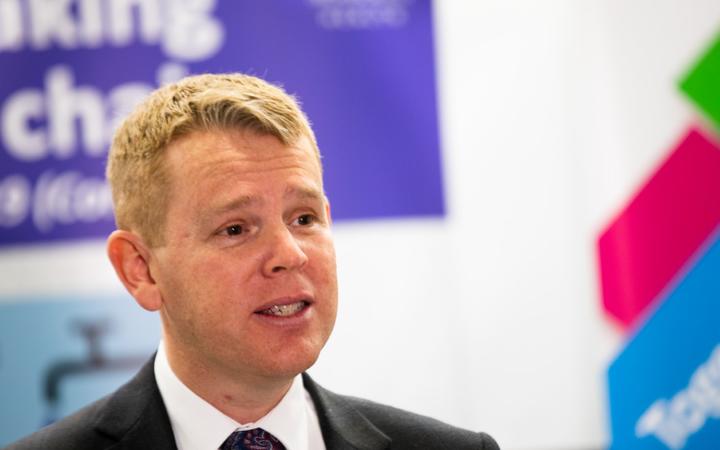 Some pieces of the puzzle regarding the latest Covid-19 cases still need to be joined together, Health Minister Chris Hipkins says. Photo: RNZ / Dan Cook

The cases are not connected to the main Auckland outbreak but to a man who was found to have Covid after leaving managed isolation.

That man flew home to Auckland from Christchurch on 11 September and tested positive five days later after two previous negative tests on day three and day 12.

Health Minister Chris Hipkins told Checkpoint the man's two family members have since tested positive, along with the three cases announced today - who are a different family.

They arrived from Delhi on the same flight as the infected man and also were sitting in the same two or three rows on the chartered flight from Christchurch to Auckland.

"The thing we've got to get to the bottom of ...is where the point of infection was, somebody potentially came to leave managed isolation or quarantine potentially still positive for Covid-19."

Hipkins said it was important to keep an open mind during the investigation as to exactly how the three people announced positive today picked up the virus.

"Sometimes at the beginning it rings a few alarm bells and then the pieces of the puzzle slot into place... you've got to keep an open mind in the early stages of the investigation. We can't quite explain this one yet."

He said it's regarded as a small related group rather than a new cluster and the people involved had done the right thing by self-isolating.

He does not know if the crew on the internal flight kept flying afterwards, however, the rules around air crews were being discussed with the airlines and there were already rigorous rules around testing for international crews.

Meanwhile, it was revealed today that New Zealand's first infection was actually a week earlier than previously thought.

The Ministry of Health originally recorded the country's first case of the virus as a traveller who returned from Iran on 28 February but today it announced the virus was actually in the community a week earlier on 21 February.

The new index cases have come about after a Waikato family was visited by a family member from Italy. The visitor was sick and five members of the household became ill shortly afterwards but none were tested because Italy wasn't a country of concern at the time.

The case has only come to light after a male member of the household recently had a sore throat, got a Covid test and produced a weak-positive result indicating an old infection.

The ministry says at this stage, only the man will be counted as a confirmed case and the other family members will be recorded as probable cases.

It was frustrating that the people who were symptomatic could not gain a test at the time, Hipkins said. Testing criteria could have been "more liberal in the beginning" and the approach was a lot different now.

The traveller who came here and became ill has since returned to Italy. Serology testing was undertaken on the person in July and the results were then shared with authorities in New Zealand.

The weak-positive case in Waikato last week has caused all of the information to be linked up, Hipkins said.

He said it was unlikely the New Zealand relatives would test positive now because of the time that has elapsed.

"All the epidemiologists will tell you this - during our lockdown, our level 4 and our level 3 lockdown, there were probably quite a significant number of cases of people who stayed home, they got better and they were never tested."

It would be a futile exercise to try and identify those people now, he said.

"It helps with piecing the jigsaw puzzle together..."