Kelly Reichardt's First Cow tells the story of two friends attempting to get by on the western frontier of 1820s America.

Simon Morris: Director Kelly Reichardt made her name with a small, feminist western called Meeks Cutoff a few years ago. First Cow, as the name suggests, is about the American West before the cowboy... or the cow.

Reichardt opens the film on the banks of a river. It's modern-day Oregon, a woman is walking her dog...  and the dog finds the shallow grave of two long-dead bodies.

Cut to 200 years earlier, and a man nervously hunting for mushrooms. It's dangerous in the Old West. He's the cook for a party of fur-trappers, and it's the job of the cook to find food.

He stumbles on a naked Chinese man, on the run from a group of angry Russian miners. Welcome to the reality of American frontier life. The two men introduce each other.

Cookie manages to clothe and feed King-Lu, then safely smuggle him to safety. Months later, the two meet up again at a rundown settlement by a trading post. The two friends now have to think about making a living.

The trading post is run by the Chief Factor - the rather surprising presence of Englishman Toby Jones. Business is good, so good that he's imported a luxury item, a dairy cow.

The two men are intrigued. Cookie says that milk is the one thing he needs to create some delicious, honey-flavoured hotcakes. They decide it's worth a risk to visit the Factor's cow at midnight and steal just enough milk.

The next day they open for business, and the hot-cakes sell…. Well, like hotcakes. 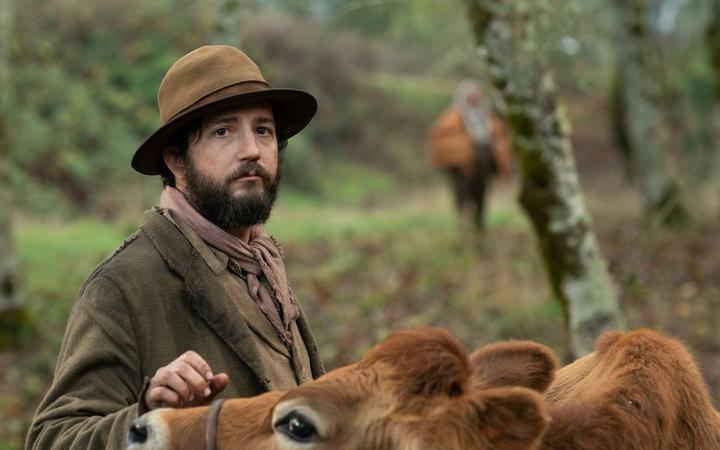 It's the story of the American Dream reduced to its bare essentials. They have the idea, they have the customers, they have everything except their own cow.

So, like many businesses, the best way to get by is with a little larceny.

The story of First Cow ostensibly follows the progress of our two entrepreneurs. But along the way, as in all great westerns, it's the subsidiary characters and themes that catch the eye as well.

Unlike the traditional western which writer-director Kelly Reichardt amusingly dismisses as "a gunfight waiting to happen", First Cow is as much about survival in the wilderness as it is the approaching danger for our two heroes.

The European inhabitants of the settlement are almost entirely men, struggling to make their pile before returning to civilization.

It reminds us that the early frontier of the United States was very much based on male friendship, as it was in Australia and New Zealand, of course. You relied on your mates - as Cookie and King-lu do - or you won't get very far out there.

There's a telling quote at the start of the film from the poet William Blake. "The bird a nest, the spider a web, man friendship".

First Cow is undoubtedly slow and occasionally meandering. It's also an extraordinarily rich source of insight into how the West really was won.

It's not the conquering of land that builds a nation. It's what you do with it, and who you allow to share in it. A rewarding film if you're not in any particular hurry.