An iconic 1972 book that provoked the ire of many Kiwis for its unflattering take on the national character rings true today as the nation responds to the covid crisis, according to a literary expert.

British author Austin Mitchell published his iconic satire The Half-Gallon Quarter-Acre Pavlova Paradise nearly 50 years ago, lampooning New Zealand for being a nation of businesses angling for taxpayer handouts and insecure conformists with an ambiguous view of those overseas. 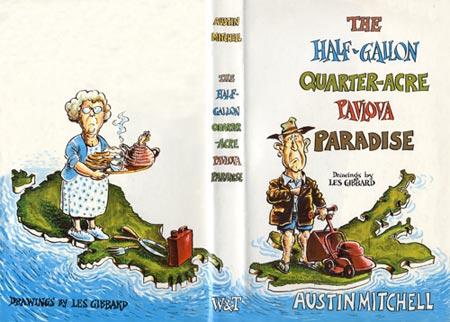 It was a light-hearted look at New Zealand life, but provoked a heated reaction from Kiwis annoyed at some of the less-than-complimentary observations written from the point of view of an ex-pat.

The historian and literary expert said the original book was very popular, being reprinted three times over six months, but had been controversial.

“I think he had a huge fondness for New Zealand, but also he had some quite pointed criticisms as well. Some New Zealanders at the time didn’t take it that well.”

Morris said he picked up the original work at book fair recently and reread it in light of current events.

“It got me thinking, if I had reread it last year I would have thought ‘far out, these conclusions that Austin Mitchell has made are so out of date, it doesn’t reflect New Zealand anymore'. And yet, when I reread it this year, I thought ‘wait a minute, some of these conclusions seem to have quite a bit of truth in them in the new normal that we find ourselves in 2020.”

The British author, who was a long-standing Labour MP in the UK, observed that Kiwis had a love-hate relationship with those overseas, something that Morris agrees with to an extent, given the Covid travel restrictions and how well New Zealanders have adapted to it.

The book stated: “A spectre is haunting New Zealand, it is the spectre of overseasia. Being small makes Kiwis or New Zealanders insecure and gives them a unique love-hate relationship with overseasia. They can’t give it up. They’re not sure it’s good for them and they protect their society with their pohutukawa curtain.”

Morris says he had always thought Kiwis had a love-love relationship with overseas, reflected in yearly travel statistics, but that easy adaptation to the Covid travel restrictions adds weigh to Mitchell’s 'pohutukawa curtain' observation.

“It has struck me this year how easily many New Zealanders have accepted their domestic short-term future, in the sense of quite stoically saying ‘OK, we can’t go overseas for a while and that’s the way it is, we’ll look around New Zealand’, and many of us are very happy with that for the medium term,” he says.

“Also, in just our wariness of people coming in from Covid hotspots and keeping the virus out, shows that the ‘pohutukawa curtain’, which may now be called ‘fortress New Zealand’ with that view of overseas in that kind of love-hate way, there’s still some true to it, especially this year.”

One of the big arguments in Mitchell’s book was New Zealand was very much a conformist society, an observation that he believed to be dated for some time. However, the success of the Covid lockdown restrictions and the social rigidity that formed around implementing these does reflect a kind of innate social conformism that Mitchell had pointed to, Morris says.

“Since then we’ve had the Springbok tour protests and a much more diverse society, so that this idea of New Zealand as a conformist society has been challenged.

“Although what we saw during the lockdown, in my view, it wasn’t the rules or the laws that government made was enforced, it was community and peer pressure that the majority of people decided ‘this is what we’re going to do’.

“Keeping people in line became more about the community doing so. We seen overseas media struggling to understand how New Zealanders fell into line so quickly and what it is about our society that made us do that. There’s a number of reasons, but one I think could be found in what Mitchell trying to say: that in many respects New Zealanders are able to confirm when they think it’s necessary.”

The book also stated that: "The role of business isn’t to produce cheaply or efficiently, but to wrangle concessions from the government." It's a statement that some may think still holds weight given the government's emergency interventions designed to protect businesses from going bust as covid shutdown large sectors of the economy. Morris disagrees, saying the protectionism of the 1970s is qualitatively different than what we're seeing today.

Muldoonism began a process leading to a society where the free market reigned supreme in New Zealand, but Covid has seen a return to state intervention to rescue the society from market failure for a restricted time period.

“Some commentators this year have looked at wage subsidy, business loans schemes and have said, perhaps what the tourism industry has been advocating for, it’s all about ‘hand-outs’, getting as much as you can from government. But I don’t think that shows our business is inefficient, rather just that has been the impact of the year.”

One observation that Morris does strongly agree with however is the lack of policy difference between the two main political parties. The book states: “New Zealand has opted for a two-party system in which each party has the same policies.”

The campaign run by the Labour Party has month was striking lack of fundamental difference in policy with the National Party.

“The reality is, in 2020, we have effected elected a STV government, with Labour having a majority and I must admit I was struggling to differentiate the policy platforms of the two main parties here and holding that centre ground that Labour did so successfully, holding that centre ground seems to be the key to New Zealand politics, which means National and Labour are often hard to distinguish.”

Lastly, as New Zealand bathes in the media glory of its effective covid-free response of authorities, a rise of patriotism and pride has taken place, Morris says. It doesn't amount to jingoism, he says.

Mitchell had stated: “As a country New Zealand has one major preoccupation – New Zealand or New Zealand books portray the country as the best place in the world.”

Morris says Mitchell’s suggestion was Kiwis were a decent sort until you question that assertion and they then get anxious and tell you, if you don’t like it, go home.

“He’s writing from an ex-pat immigrant’s point of view, so what he’s saying in 1972 is New Zealanders are quite insular, very focused on New Zealand, making sure New Zealand was portrayed in the best possible light. I think we’ve lost a lot of that," Morris says.

“We’re a far more outward-looking culture, but this year I think we’ve seen the rise of a very benign form of patriotism, which I haven’t observed for a while in New Zealand… in terms of outside sporting events I can’t recall that for quite a while. Every much this ‘New Zealand is leading the way’. You could call it self-congratulations and argue that it’s well-merited, but that focus on saying ‘New Zealand is the best’ Mitchell was quite struck by in 1972 and perhaps we’re seeing some of it again in 2020.”