Former NZ Gardener editor Lynda Hallinan is a mad-keen gardener a former 65-acre smallholding in the Hunua Ranges, south-east of Auckland and is here to answer all your gardening questions.

Also an author, broadcaster, amateur home-brewer, pickler, preserver, part-time farmer and occasional farmers’ market stallholder, Hallinan has a bounty of tips - from how to deal with snails and slugs, to when to plant your tomatoes ... 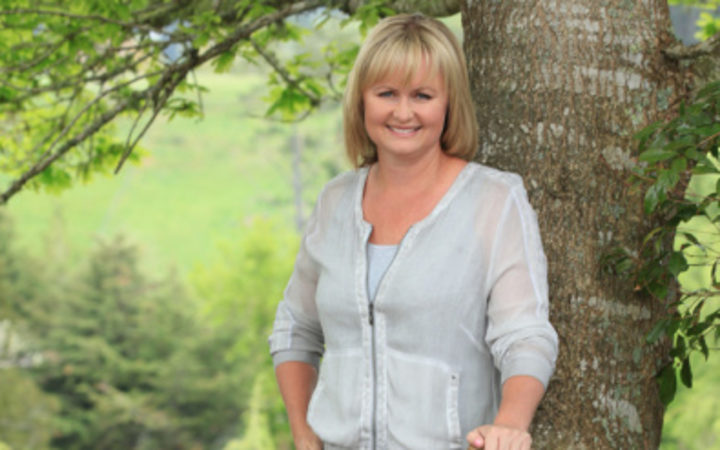 Is it too early to plant tomatoes?

I did a little experiment once where I planted tomato seedlings in August when they first become available in garden centres and then I waited until Labour Weekend and planted some at that time and the ones that were planted later are far superior - they grow much quicker. 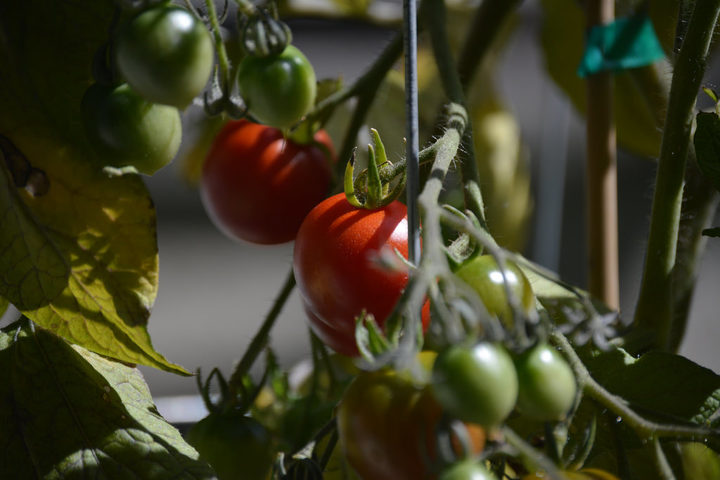 Tomatoes hate cold soil. If you have planted tomatoes out early in September and notice they’re starting to go purple around the edges, it’s because they can’t take up phosphorous.

Just hold fire - there’s no rush and there’s plenty of time for tomatoes in October.

If you’ve got lots of slugs and snails, they’re just going to eat your garden - that’s a fact.

If you have pet children, what you need is a torch and bucket of salty water, and you give them [the children] a 10 cents bounty on each head and send them out at night and they can just pick the slugs off and drop them into a bucket of salty water and that despatches them pretty nicely and organically.

If you are going to use chemical pellets, put them in a plastic container with holes cut in the side so birds can’t get it and neither can pets - slugs get in through holes in the side.

Tui Quash is one of friendliest of baits on the market - it’s a high dose of iron, it’s not actually toxic as such.

One reader was still getting leaf curl in miniature stone fruit trees, despite regular spraying ...

Leaf curl is a fungal disease very prevalent on peaches and nectarines when the leaves first come out, a little bit less so on apricots. It is largely cosmetic, it won’t kill the tree but it does make them look quite revolting. 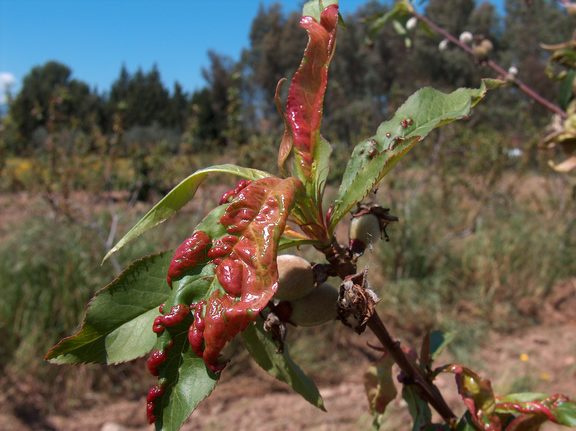 They drop all their leaves and in doing so infect all of the grass around your tree with the spores which splash back in the rain.

What tends to happen is people spray the tree three or four times but they don’t spray around the tree. Spray the grass under you tree - it’s just as effective as spraying the tree.

With miniature stone fruit trees, there’s lots of nooks and crannies for those fungal spores to get stuck into, so you have to absolutely drench the tree.

Generally I don’t bother with miniature stone fruit trees - they look kind of cute when they are in blossom, but it’s very hard to get them to fruit well with spraying them heaps. 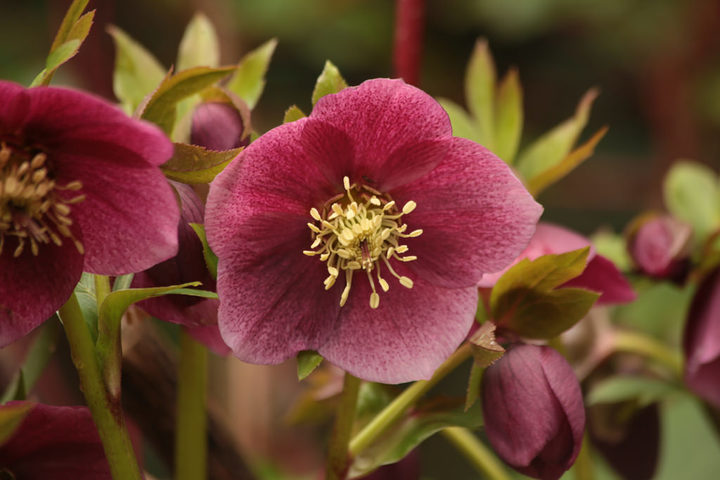 This is the perennial problem with gardening; gardens just look better in spring and summer and then you have autumn colour and in winter you have nothing.

An easy care and thoroughly rewarding plant right through winter is hellebore. A perennial with nice green glossy foliage and beautiful flowers that are held quite high above their leaves, they’re absolutely gorgeous and they spread well - brilliant for winter gaps.

They’re so easy, you put them in the ground and they do the rest for you every year they come back and flower. If they get a bit ratty looking, around about May chop them back.

In a small garden think about some spring bulbs, at least then you’ve got things like daffodils coming up which look nice in winter even if they’re not in flower.

Aphids infestation on my brassicas 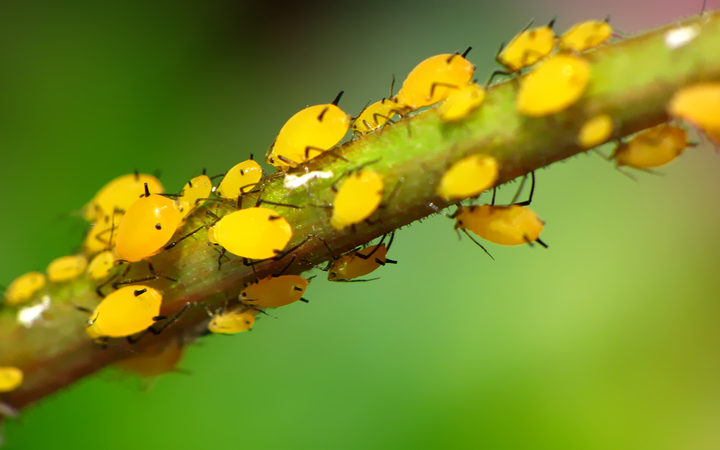 Aphids seem to go crazy for cavolo nero - I just hose them off with a really sharp blast from the hose.

An organic fish fertiliser seems to deter aphids and white fly too.

Otherwise grow them under a very fine insect mesh - not dissimilar to net curtains we used to have in the house. Put that all over your vegetable crops and that keeps the aphids off – but make sure the plants are aphid-free.

I have bought two acres of rural land in Marlborough with stony, clay soil. Should I dig it out before starting a garden?

If you are starting a new garden and you’ve got rubbish soil, it's worth putting the effort in at the beginning.

You could scrape up that soil and layer it up 50:50 with compost and gypsum and let that break down and you’ll have a good source of soil to put back into the garden.

You don’t want to be planting straight into compost, you really need to improve real soil so you can’t just buy bagged stuff and shove it on the ground: it doesn’t work like that, it’ll break down on top of the clay base.

You could build up a little bit, so put edging up to 15 cms high and then buy in some top soil and some compost and stuff and dig it in, but be very wary.

I did this at Hanua. My husband (a roading contractor) called and said 'would you like a free truck load of top soil' and I said sure, because we were doing a new garden. And he brought it home and I filled up all my beds with it and it was riddled with convolvulus.

That’s the problem if you’re are buying in soil from somewhere likely it’s someone else’s problem on the move.

My advice would be try to fix what you’ve got already by adding extra stuff to it, clay’s a good base for a garden. It holds nutrients, it holds moisture.

The English gardener struggling in Auckland

We have a vastly different climate to England’s. In England you get these beautiful gardens because nothing grows terribly fast, so if you buy a hebe in England it sits there nicely, well behaved and looks quite charming. Here it grows out of whack, goes leggy and looks scrungy after about 3 years and you have to chop it back.

Depending where you live in Auckland, walk round your neighbourhood and see what’s growing in other peoples gardens. Go out to the Botanic Gardens and see what’s happening there.

The leaves and flower stems of my eucomis (pineapple lily) flop badly every year. I've tried feeding with low nitrogen and high potash fertiliser, and they grow in full sun, but they still flop.

It’s the nature of the beast. If you want to grow pineapple leaf (eucomis) you just have to suck it up - that’s what they do in the wild: they grow in the desert, they don’t get a lot of water, they certainly don’t get fed. So, they toughen out and stay much smaller and succulent. Here, life is good and easy, and they get too big. 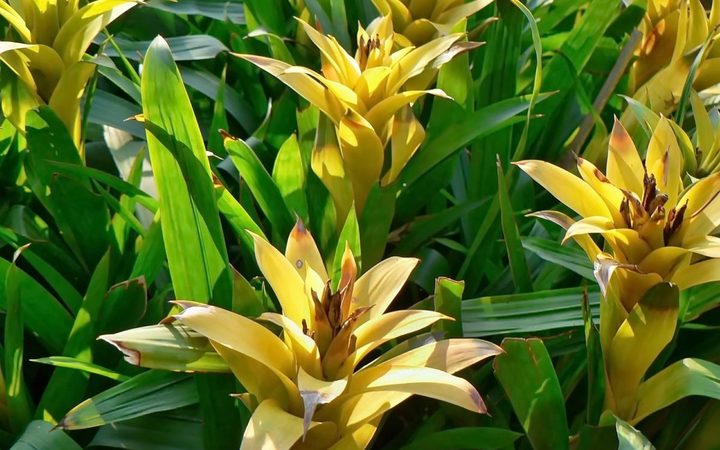 Don’t feed them at all, plant them in sharp gravel which means nutrients and water drain away.

How do I deal to the black soot on my citrus trees?

The sooty mould that grows on citrus trees is a fungus, and that’s actually growing on honey dew and honey dew is the excretion of sap sucking insects.

On your citrus, there will be something sucking out the sap - aphids or scale - and they are delivering sticky sugary stuff which gets all over the leaves and then the fungus grows on that. You have to use something to kill the sucking bugs first.

You can use an organic spraying oil. Buy a spraying oil, you mix that up with water and just spray that on the tree and what that does is smother the sap-sucking bugs. Without the sticky stuff, the fungus will wash off - it has nothing to grow on.

Lavender hedges in Canterbury have mostly died. What is a fail-safe small hedging plant that might work?

It’s very hard to grow English lavender well in New Zealand, although it does particularly go well in Wanaka.

One hedge I love is escallonia pink elle and it grows to about a metre high and it looks a little like buxus - nice green glossy leaf - then it has these beautiful pink flowering stems.

Other options are Mexican orange blossom - a variety called Aztec Pearl with lovely white flowers and or a fruiting hedge like Chilean guava.

Convolvulus is driving me crazy!

It’s the plant you give up on and buy a new house! 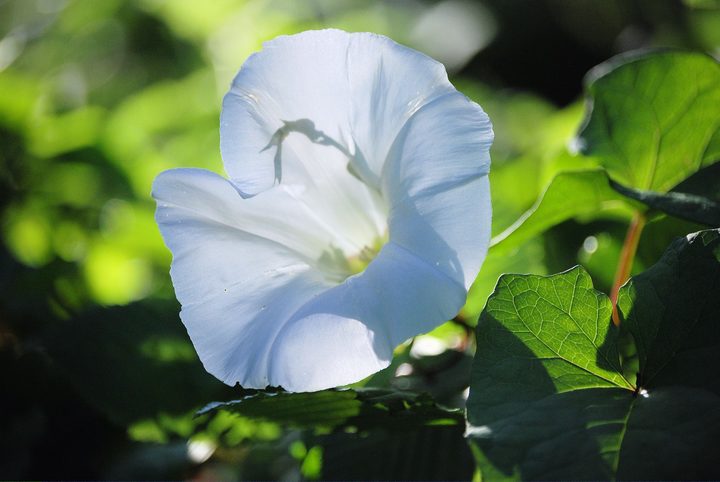 You can’t dig it out - [if you try,] you break up the roots and then you get more.

The best thing to do is get a really nasty herbicide, get a plastic bag and pour neat herbicide into the bag - only a table spoon - and then grab some of the foliage, shove it into the plastic bags and tie it off.

The systemic herbicide will slowly be sucked into the stems of the plants, that way it will poison itself. That’s pretty much the only effective way to get rid of it.

If your Apples had coddling last year, be aware a couple of weeks from now you need to start spraying them. Try Organic Caterpillar Bio Control from Kiwicare.